Almonds vs. hard boiled egg - Which is healthier? 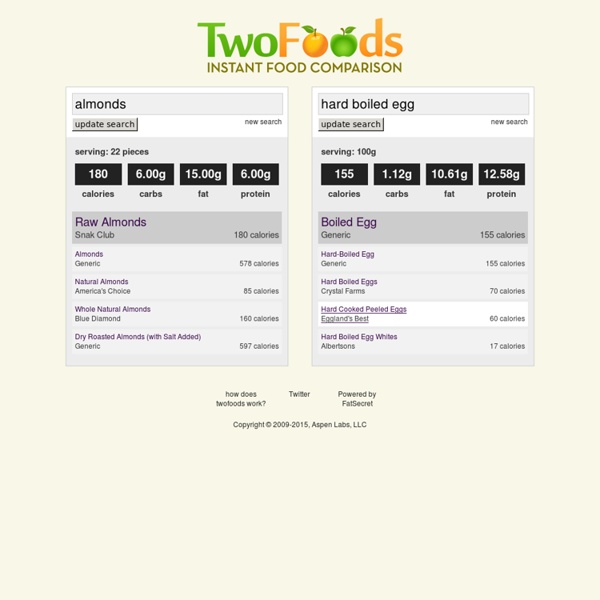 Blog & Blog Archive & 23 Surprisingly Effective... For the live-updated, interactive version of this infographic, click here. A year ago, we published one of our most popular findings – 6 surprisingly effective treatments for depression. I went ahead and repeated the analysis today, and now we have 23 treatments in the “surprisingly effective” category for depression. This chart is based on 4,956 people with depression who participated in CureTogether surveys, compared to 944 people last year.

Fresh Food Central - Mushrooms Popular Varieties: White, Chestnut, Shittake Store At: Chilled but keep them dry; mushrooms not refrigerated will go mouldy quickly. Keep them dry too. Comes From: Worldwide Seasonality: All year round Fungi are not really plants; they have neither chlorophyll (which gives plants their green colouration), or root systems. They do not receive nutrition in the same way as plants, and they have different growing requirements. Fungi are more similar to moulds and yeasts than they are to plants.

How do French Stay Slim & Healthy If you actually want to say "goodbye" to your belly, you should take a lesson from the French. Despite a diet stuffed with cream, butter, cheese and meat, just 11 percent of French adults are obese[3], compared with America’s 33 percent[2]. The French live longer too, and have lower death rates from coronary heart disease. They don’t diet and they don’t spend hours panting round the gym. Is it really possible? The 29 Healthiest Foods on the Planet The following is a "healthy food hot list" consisting of the 29 food that will give you the biggest nutritional bang for you caloric buck, as well as decrease your risk for deadly illnesses like cancer, diabetes and heart disease. Along with each description is a suggestion as to how to incorporate these power-foods into your diet. Fruits 01. Apricots The Power: Beta-carotene, which helps prevent free-radical damage and protect the eyes.

The nine rules of best-before dates: when to freeze, when to chuck out food Most of us have swigged milk teetering on the edge of its use-by date, and shorn the green shoots off a potato. Now it seems our spirit of rationing, or rather our gross refusal to clear out the fridge, has been vindicated. A report by the Waste and Resources Action Programme (Wrap) found shoppers could save £600m a year if best-before dates were extended by even one day. Wrap investigated short-life products, lasting between 3-12 days, that typically have high levels of waste, including sliced ham, potatoes, apples, minced beef, chilled pizza, bread, bagged salad and milk.

Snake oil? Scientific evidence for health supplements Updated September 2015 with a revitalising boost of fresh data. New entries include melatonin, proving travellers were right about its effect on sleep; and good evidence for Vitamin D for flu, bones and long life. Evidence for valerian as a cure for anxiety has dropped, as has any likelihood that cranberry juice has impact on urinary infections. Thanks to visitor suggestions we’ve added entries for supplements that may in some cases be harmful, including Vitamin A, which has been linked to birth defects. Note: You might see multiple bubbles for certain supplements.

Zucchini Noodles with Pesto This dish is a play on pesto spaghetti! I used a spirooli to make thin zucchini noodles and tossed it in a creamy pesto sauce. Pesto is usually made exclusively from pine nuts but holy cow they were really expensive at my local store! UCB Parents Jokes &Quotes: Kids talk Science This page is brought to you by UC Berkeley Parents Network Back to the Jokes & Quotes Collection THE FOLLOWING ARE ALL QUOTES FROM 11 YEAR OLDS' SCIENCE EXAMS: * "Water is composed of two gins, Oxygin and Hydrogin. Oxygin is pure gin. Hydrogin is gin and water." * "Artificial insemination is when the farmer does it to the cow instead of the bull." * "When you breathe, you inspire. When you do not breathe, you expire." * "H20 is hot water, and CO2 is cold water." * "Three kinds of blood vessels are arteries, vanes, and caterpillars." * "Dew is formed on leaves when the sun shines down on them and makes them perspire." * "Mushrooms always grow in damp places and so they look like umbrellas." * "The body consists of three parts - the brainium, the borax and the abominable cavity.

I Wish I Knew These 13 Easy Homemade Hummus Recipes Earlier Hummus, a delicious and healthy Eastern Mediterranean dip, is in seriously high demand right now! And why not? It’s low in fat, high in protein, and has so many different variations that it can never become boring to eat. Prepared hummus is becoming one of the most popular foods in the USA, with sales reaching $250 million in 2013 alone, but the folks over at Shape have created 13 alternative recipes you can use to make the best hummus ever. All you need to start are some cooked chickpeas and a blender — happy hummus-ing! How To Make Hummus: Recipes For Hummus Variations | Shape

The Joy Project + Anti-Binge Strategies When shopping, make a list before going. ALWAYS shop on a full stomach. Stick to ONLY those items on your list. Never eat from a bag or box. Always portion out single-serving sizes into a bowl or onto a plate. 7 Super Snacks That Heal If some doctors had their way today, Americans would be more medicated than industrial feedlot cattle. But what most people don’t realize is that the first line of defense against stress, fatigue, depression, and so many other maladies is found in supermarket aisles, not in the drug store. Research shows that the vitamins, minerals, and active compounds specific to certain fruits, vegetables, and even chocolate and red wine have an immediate and lasting impact on your mood, your health, your fitness — even your sex life. Whether you have a big presentation at work, or the need to burn a few hundred extra calories a day (and who doesn’t want to do that?), why not put food to work for you?