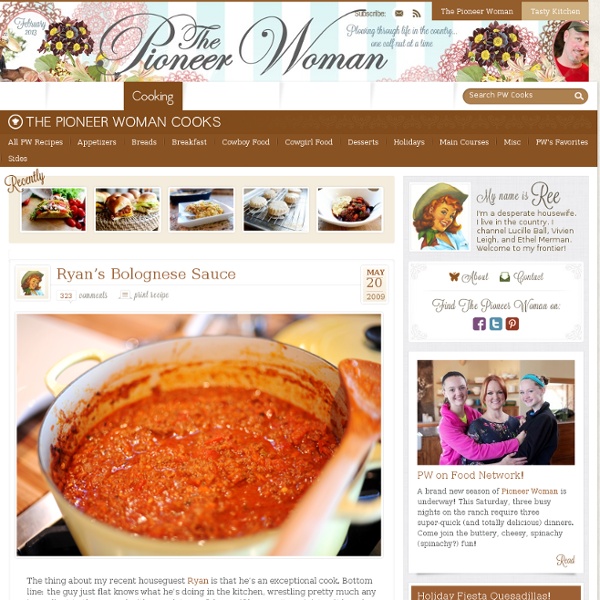 The thing about my recent houseguest Ryan is that he’s an exceptional cook. Bottom line: the guy just flat knows what he’s doing in the kitchen, wrestling pretty much any ingredient to the ground with complete confidence. If he wasn’t a minister, I’d say he missed his calling. But…yeah. The other thing about my recent houseguest Ryan is…he doesn’t so much use recipes. The night before Ryan and his family left Oklahoma (and guess what? For dinner Ryan prepared homemade pasta and his version of a Bolognese sauce. Please bear with me on the quantities of the ingredients Ryan used. He started by grating carrots. I started by having a glass of wine. Then he peeled and halved a red onion. Then he diced up a good amount. Then he sliced and diced a HUGE boatload of garlic. Lots of olive oil went into the Dutch oven. When it comes to adding olive oil to the pan, we don’t deal in tablespoons around here. When the oil was heated, Ryan threw in the grated carrots. Then came the red onions. Intellesting.

Flashback to the Seventies: Grasshopper Pie Perrys' Plate: SDT Week - Day 1: Creamy Chicken and Sun-Dried To (What’s SDT Week? Click here.) I’m starting out with a dish that you’d typically think of when you hear the word “pesto”. Throwing pesto (SDT, basil, or otherwise) over a batch of steaming hot pasta is an easy, quick dish you can do in a pinch. Add a few vegetables and some meat, if you like, and you’ve got a whole meal done in under 30 minutes! I must add, though, that sun-dried tomatoes and goat cheese are very good friends. Ingredients:8 ounces whole wheat fettucine (spaghetti or linguine would also work) 1 1/2 cups cooked shredded chicken 1 cup jarred marinated artichoke hearts, chopped 2 cups chopped fresh baby spinach (about 3 big handfuls) 1/3 cup Homemade Sun-Dried Tomato Pesto (or minced oil-pack sun-dried tomatoes) 1 green onion, sliced thinly 2 ounces goat cheese salt and pepper to tasteDirections:Bring a large pot of water to boil.

Step 3: Fully Funded Emergency Fund | beingfrugal.net Don’t touch your emergency fund, unless you are truly having an emergency! The third step in Dave Ramsey’s plan for getting your financial life in shape is a fully funded emergency fund. The definition of a fully funded emergency fund is 3 to 6 months worth of expenses in an easily accessible account. Why Do You Need a Full Emergency Fund? Some people believe that having a small emergency fund of $1000 or so is enough, as long as they have assets like a 401k to tap into if they run into trouble. My family found out about the importance of a large emergency fund a few years back when my husband lost his job. When you have 3 to 6 months of expenses tucked away, you have the freedom to wait for a good job. You don’t want to be tapping into your 401k to pay for an unexpected surgery or hospital stay. What is a Fully Funded Emergency Fund? It’s not 3 to 6 months of your salary. Deciding whether to fund your emergency fund for three months, six months, or somewhere in between can get tricky.

Penne Bolognese I can’t even recollect how many versions of Bolognese sauce I have made thusfar. Well, my kids just love this classic Italian pasta sauce and so, here goes another one. :-) This Penne Bolognese recipe was adapted from Patsy’s Cookbook-Classic Italian Recipes. I think it’s among one of the best Italian cookbooks out there. It’s filled with simple and flavorful recipes which are accompanied with easy to follow instructions. Some of you may notice, I have tried and posted many of her recipes here. Recipe adapted from Patsy’s Cookbook-Classic Italian RecipesPenne Bolognese(Printable Recipe)Ingredients Method Heat a large skillet over medium-high heat and sauté the onions for 4 minutes, or until lightly browned. Coarsely chop the tomatoes and add with their juice, the bay leaves, wine, beef broth, and oregano. Remove the bay leaves.

StumbleUpon Life! By Greg Henry You know I have been a fan of StumbleUpon for several months. But like so many of these social networking tools I have come to find that I was not really taking advantage of all it has to offer. I want to pass along a few things I have learned in order to encourage you to use and benefit from the community building aspects of StumbleUpon. In the food specific blogworld, sites like FoodGawker, Photograzing and TasteSpotting can indeed drive traffic to your blog. They are great at helping you build brand recognition, but their format actively discourages the reading of your material. Facebook is great for bragging rights and announcing new posts and reconnecting with your high-school BFF. Twitter is at least for “readers”. To me StumbleUpon is an amalgamation of all these social media outlets. So if you think the point of StumbleUpon is simply voting up your own posts, you’re quite mistaken. Every blogger (or avid blog reader) should have a StumbleUpon membership. “1. 2. 3.

Pasta with Creamy Bacon and Pea Sauce | Per l'Amore del Cibo After being glued to the TV every Friday night to watch Jamie Oliver work his magic on Food Revolution, Billy and I decided it was time to go pick up his latest book and get some new British inspiration. Jamie’s Food Revolution Cookbook is full of simple, flavorful and (most of all) healthful meals that are accessible to any home cook in America. Much like the show did for public schools, Jamie’s Food Revolution helps the average American rediscover what healthy, home-cooked eating is all about, without skimping on flavor. The first recipe we tried from the food revolution cookbook was this pasta with bacon and peas in a creamy sauce. I think this recipe is proof that you don’t have to cut out things you love (like carbs and creamy goodness) to eat healthy — everything is acceptable in moderation. Orecchiette with Bacon and Peas in a Creamy Sauce This is really a great recipe — something different, yet familiar. Check out this (and other!)

makes » recipe: ice cream cake (but not like you think) If you’ve been following along, you’re probably aware that I collect cookbooks. Specifically, cookbooks created by New England civic organizations between 1950 and 1980 for fundraising purposes. With yard sale season in full swing, I find myself solvent with new recipe ideas, among them one I found in this vandalized and water-damaged collection. The picture on the cover somewhat suggests the architecture of Calvary Baptist Church in Easthampton, but I bought the book in Millbury and it has no date (I’ve never been to that Church, I just tried to do some due diligence in my googling). Nevertheless, it *does* include a chocolate cake recipe with a secret ingredient: ice cream. And hey, no cake flour or fancy measuring required, because we’re using cake mix. I let my ice cream soften by scooping it up into small chunks and letting it sit a few minutes. The recipe calls for greasing & flouring a tube pan. She was right. Preheat oven to 350o.

Finding Simplicity by Going Scratch When I first wrote this article, I was gung-ho all fired up about a campaign I started on my blog called Going Scratch. That was nearly a month ago. I write for this blog once a month, sometimes more when I get a bee in my bonnet. Going Scratch was an idea I had to help myself return to basics. My question to myself was: Why am I relying on the store to provide things for my family when I can just as effectively make them myself? It’s a good question I thought. I do. What was wrong with me? I can do these things gradually and as I have time for them. I now think I have a better perspective on how I want to take on my campaign – gradually. Come on by Beth’s blog Coming Up for Air and join her Going Scratch campaign, or just pop over to read about her urban homestead! This is an original 5 Minutes for Going Green post!

White Cheddar Chicken Pasta Do you stand in front of your closet thinking I have nothing to wear even though its full of clothes? I do this all.the.time. It drives my husband crazy because my closet seems like clothes are exploding from it half the time and my dresser drawers are way too full when all the laundry is clean. Its frustrating to him, but he does the same thing when he looks through the kitchen, he always says there is nothing to eat. Keeping a well-stocked pantry makes it much easier to always have something to make for dinner. For this pasta dish, the sauce is a simple cheese sauce, similar to any macaroni and cheese recipe, started with a roux made with flour and butter. White Cheddar Chicken Pasta For the chicken:1 pound boneless, skinless chicken breasts, trimmed and cut into 1 inch pieces1 tsp dry mustard1 T fresh thyme1/2 tsp salt1/2 tsp pepper1 T olive oil Heat olive oil in a large skillet over medium heat.