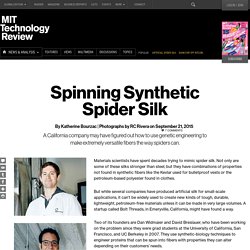 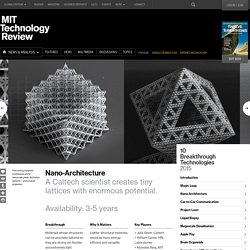 Availability: 3-5 years Breakthrough Materials whose structures can be precisely tailored so they are strong yet flexible and extremely light. Why It Matters Lighter structural materials would be more energy-efficient and versatile. Key Players. Nano-Coated Steel Is 10 Times Stronger. Black Phosphorous: The Birth of a New Wonder Material. In the last few years, two-dimensional crystals have emerged as some of the most exciting new materials to play with. 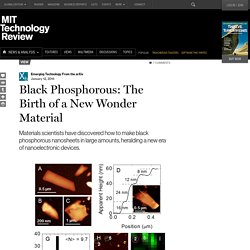 Consequently, materials scientists have been falling over themselves to discover the extraordinary properties of graphene, boron nitride, molybdenum disulphide, and so on. Science Update: The Science Radio News Feature of the AAAS. May 30, 2014 A biodegradable plastic isolated from shrimp shells could help curb a huge environmental problem. 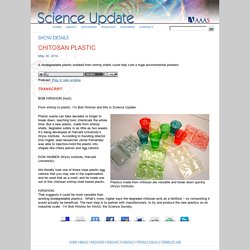 Cooling cool vests, CoolZone Products The Tech behind the Cool. Although phase change materials have been utilized for decades, it has only been recently recognized that the benefits of these controlled temperature compounds demonstrate excellent results when used as personal body cooling or cool therapy devices and in stabilizing the surrounding temperature of inanimate objects (equipment). 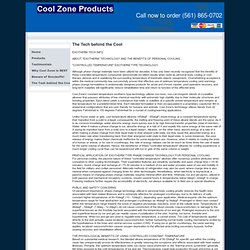 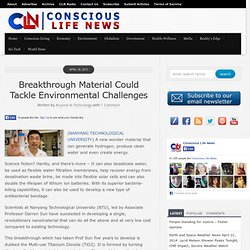 Science fiction? Hardly, and there’s more – It can also desalinate water, be used as flexible water filtration membranes, help recover energy from desalination waste brine, be made into flexible solar cells and can also double the lifespan of lithium ion batteries. With its superior bacteria-killing capabilities, it can also be used to develop a new type of antibacterial bandage. Scientists at Nanyang Technological University (NTU), led by Associate Professor Darren Sun have succeeded in developing a single, revolutionary nanomaterial that can do all the above and at very low cost compared to existing technology. How Buildings Could Keep Cool without Electricity. A material that simultaneously reflects light and radiates heat at frequencies that vent it through the Earth’s atmosphere could one day help cool buildings on hot days. 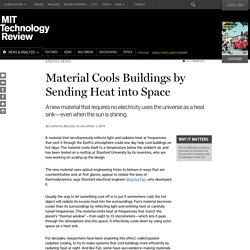 The material cools itself to a temperature below the ambient air, and has been tested on a rooftop at Stanford University by its inventors, who are now working on scaling up the design. The new material uses optical engineering tricks to behave in ways that are counterintuitive and, at first glance, appear to violate the laws of thermodynamics, says Stanford electrical engineer Shanhui Fan, who developed it. Usually the way to let something cool off is to put it somewhere cold; the hot object will radiate its excess heat into the surroundings. Fan’s material becomes cooler than its surroundings by reflecting light and emitting heat at carefully tuned frequencies. Mushroom Materials. Redesigned Window Stops Sound But Not Air, Say Materials Scientists.

Noise pollution is one of the bugbears of modern life. 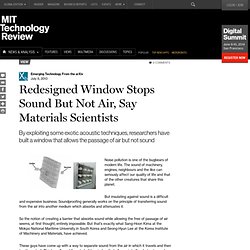 The sound of machinery, engines, neighbours and the like can seriously affect our quality of life and that of the other creatures that share this planet. But insulating against sound is a difficult and expensive business. Soundproofing generally works on the principle of transferring sound from the air into another medium which absorbs and attenuates it. So the notion of creating a barrier that absorbs sound while allowing the free of passage of air seems, at first thought, entirely impossible. Ancient Roman Concrete Is About to Revolutionize Modern Architecture. After 2,000 years, a long-lost secret behind the creation of one of the world’s most durable man-made creations ever—Roman concrete—has finally been discovered by an international team of scientists, and it may have a significant impact on how we build cities of the future. 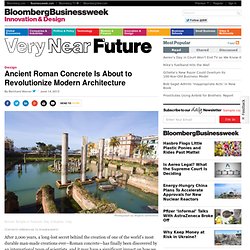 As anyone who’s ever visited Italy knows, the ancient Romans were master engineers. How Buildings Could Keep Cool without Electricity. 16 Year-Old Invents Bio-Plastic From Banana Peels. Young people today are constantly creating new ways in which we can bring change to the planet. 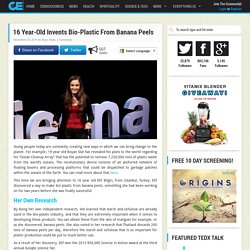 For example, 19-year-old Boyan Slat has revealed his plans to the world regarding his “Ocean Cleanup Array” that has the potential to remove 7,250,000 tons of plastic waste from the world’s oceans. The revolutionary device consists of an anchored network of floating booms and processing platforms that could be dispatched to garbage patches within the oceans of the Earth. You can read more about that here. This time we are bringing attention to 16 year old Elif Bilgin, from Istanbul, Turkey.