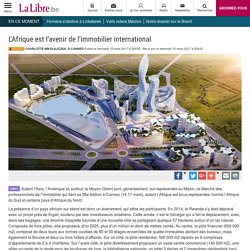 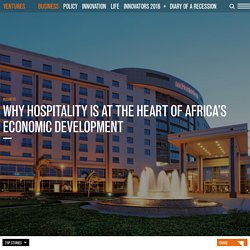 Global business hubs such as Dubai and Singapore placed infrastructure at the heart of their approach to nation building, turning them into world-class cities and a haven for investors. Whilst roads and logistics are crucial, high-quality accommodation and hospitality facilities are critical. Investors, policy-makers, and business travelers will always need somewhere to sleep – so hospitality is as much a practical necessity as it is a fast-growing industry sector and investment opportunity. Fast growing category. Carlson Rezidor on Track to achieve More than 23,000 Rooms in Africa. Nine of the top ten most healthiest countries are in Africa. HEALTHY CUSINE: Nine African countries have the best food diets in the world CHAD AND Sierra Leone have the best diets in the world, consuming the most fruit, vegetables, nuts and wholegrains. 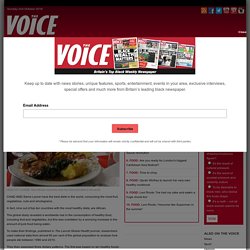 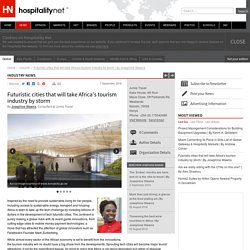 While almost every sector of the African economy is set to benefit from the innovations, the tourism industry will no doubt have a big share from the developments. Visitors will also be attracted to other destinations in the continent, to experience the beautiful naturalistic existence between man and nature. 1. Africa : Future Urban Cities for the 21st century. Africa's big cities offer investors hope in hard times. JOHANNESBURG: Africa's biggest economies have been hammered by the collapse in commodity prices over the past 18 months but there are still investment bright spots to be found. 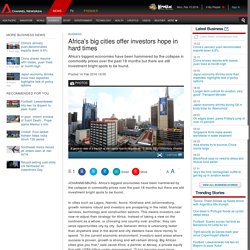 In cities such as Lagos, Nairobi, Accra, Kinshasa and Johannesburg, growth remains robust and investors are prospering in the retail, financial services, technology and construction sectors. This means investors can now re-adjust their strategy for Africa. Instead of taking a view on the continent as a whole, or choosing one country over another, they can seize opportunities city by city. Sub-Saharan Africa is urbanizing faster than anywhere else in the world and city dwellers have more money to spend. "In the current economic environment, investors want areas where success is proven, growth is strong and will remain strong. Nairobi is the most attractive destination for foreign investment, according to a 2015 report by PricewaterhouseCoopers, followed by Accra, with Lagos and Johannesburg equal third.

Focus Eco / Seminaire sur le financement du logement en Afrique. Africa: UN Tool Will Map 'Science of Cities' As Rapid Urbanization Emerges As Force in Sustainable Development. Photo: IRIN Kinshasa is a booming city With the urban growth boom driving trends that will affect all aspects of sustainable development, the United Nations Human Settlements Programme (UN-HABITAT) is set to release today details of a new scientific tool that measures the rate of global urbanization, its characteristics, and the potential effect of urban sprawl on the quality of life for city dwellers. 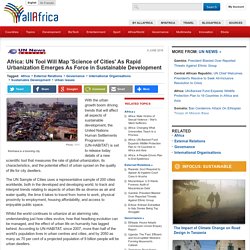 The UN Sample of Cities uses a representative sample of 200 cities worldwide, both in the developed and developing world, to track and interpret trends relating to aspects of urban life as diverse as air and water quality, the time it takes to travel from home to work, physical proximity to employment, housing affordability, and access to enjoyable public space. Whilst the world continues to urbanize at an alarming rate, understanding just how cities evolve, how that headlong evolution can be managed, and the effect of urban life on humanity has lagged behind. Green building gaining momentum in Africa - Africa Property News. The pace of green building in Africa is accelerating, not only in South Africa but across the continent, according to Brian Wilkinson, CEO of GBCSA Green building is gaining rapid momentum in Africa with office buildings in Rwanda and Namibia both receiving 6-Star Green Star ratings. 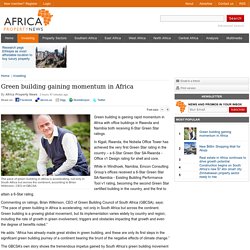 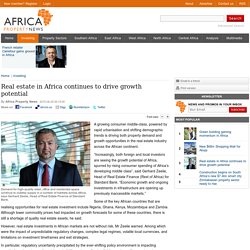 A growing consumer middle-class, powered by rapid urbanisation and shifting demographic trends is driving both property demand and growth opportunities in the real estate industry across the African continent. “Increasingly, both foreign and local investors are seeing the growth potential of Africa, spurred by rising consumer spending of Africa’s developing middle class”, said Gerhard Zeelie, Head of Real Estate Finance (Rest of Africa) for Standard Bank.

“Economic growth and ongoing investments in infrastructure are opening up previously inaccessible markets.” Experts ponder on how to house skyrocketing population in Africa. In the back of skyrocketing population in Africa, participants at the African Construction and Totally Concrete Expo in Johannesburg have expressed the need to look into ways of housing millions in Africa. 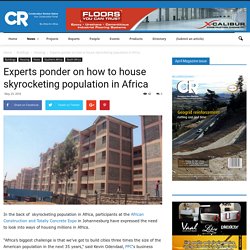 “Africa’s biggest challenge is that we’ve got to build cities three times the size of the American population in the next 35 years,” said Kevin Odendaal, PPC‘s business development executive. Odendaal highlighted the opportunities available for construction industry growth that exist in Africa as a result of growth in population expected in the coming 35 years. According a report by the Mo Ibrahim African Urban Dynamics, Africa will have to accommodate close to 900million new urban settlers by 2050, when it is projected that Africa will have one quarter of the total global population.

The current Africa’s population stands at 1.2billion, with about 40% of this living in cities. This means the Africa will be required to build infrastructure to accommodate this growth.