Reconstruction: America After the Civil War. HBCUs: where they are and how well they're doing. This map gives the location, size and vital statistics for each of 100 accredited historically black colleges and universities (HBCUs). 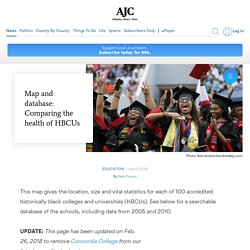 See below for a searchable database of the schools, including data from 2005 and 2010. UPDATE: This page has been updated on Feb. 26, 2018 to remove Concordia College from our list of accredited schools. To explore the map: Scroll over or click on each school for more information. The Night Tulsa Burned Part 1. African - Moving North, Heading West - Immigration…- Classroom Presentation. 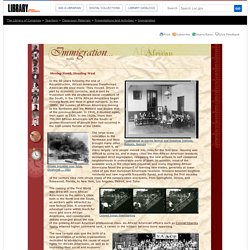 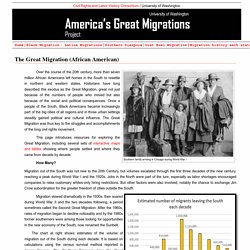 Historians have long described this exodus as the Great Migration, great not just because of the numbers of people who moved but also because of the social and political consequences. Once a people of the South, Black Americans became increasingly part of the big cities of all regions and in those urban settings steadily gained political and cultural influence. AAME : Overview Studies of African-American migration most often focus on the twentieth century, when millions of black people left the South, moving northward to industrial cities of the East and West. 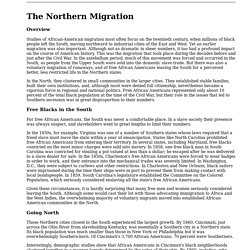 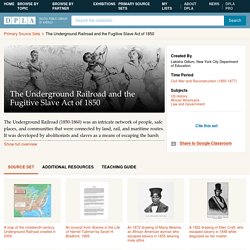 It was developed by abolitionists and slaves as a means of escaping the harsh conditions in which African Americans were forced to live, and ultimately to assist them in gaining their freedom. Although securing one’s freedom was challenging, many enslaved persons escaped to free states in the North and to Canada. Free African Americans, however, faced the threat of being returned to a slaveholder as a result of the The Fugitive Slave Act of 1850, which required that all escaped enslaved persons be returned, upon capture, to their masters. TheUndergroundRailroad. Underground Railroad. The Underground Railroad was a network of people, African American as well as white, offering shelter and aid to escaped slaves from the South. 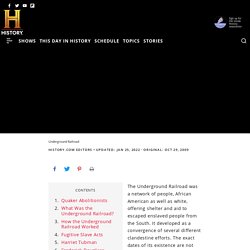 It developed as a convergence of several different clandestine efforts. Kicked Off the Land. ProPublica is a nonprofit newsroom that investigates abuses of power. 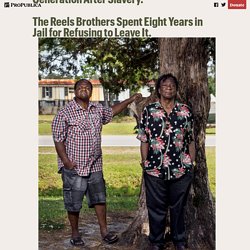 Sign up for ProPublica’s Big Story newsletter to receive stories like this one in your inbox as soon as they are published. In the spring of 2011, the brothers Melvin Davis and Licurtis Reels were the talk of Carteret County, on the central coast of North Carolina. Some people said that the brothers were righteous; others thought that they had lost their minds. That March, Melvin and Licurtis stood in court and refused to leave the land that they had lived on all their lives, a portion of which had, without their knowledge or consent, been sold to developers years before. Jim Crow, Meet Lieutenant Robinson. Spring 2008, Vol. 40, No. 1 By John Vernon If the United States does not win this war, the lot of the Negro is going to be far, far worse than it is today. 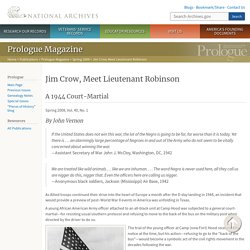 Yet there is . . . an alarmingly large percentage of Negroes in and out of the Army who do not seem to be vitally concerned about winning the war. —Assistant Secretary of War John J. From Dred Scott to the Civil Rights Act of 1875: Eighteen Years of Change. In 1857, the U.S. 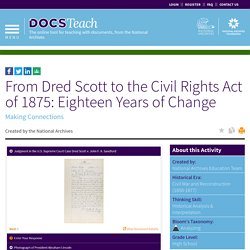 Supreme Court ruled in the Dred Scott decision that African-Americans were not citizens of the United States. Yet within 18 years, Black Americans would not only have citizenship, but would be guaranteed the right to vote and equal access to transportation, housing, and other facilities by the Civil Rights Act of 1875. Although many of these rights would be lost through the rulings of the U.S. Supreme Court in 1883, when the Civil Rights Act of 1875 was found unconstitutional, and in 1896, when the Plessy v. How Effective were the Efforts of the Freedmen’s Bureau?

In this activity, students will analyze documents from the War Department’s Bureau of Refugees, Freedmen, and Abandoned Lands — better known as the Freedmen’s Bureau — that Congress established on March 3, 1865, as the Civil War was coming to an end. 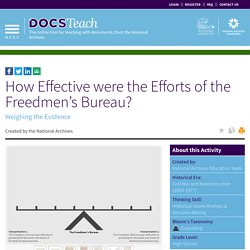 Church. Ball, Charles. Why Are Fewer Black Americans Voting? They Can’t. Human Rights Dallas Maps. Segregation, Integration, and the Civil Rights Movements in Baseball and the United States Postal Service. Did the Black Panther Party Help or Hurt the Civil Rights Movement? Welcome to the Civil Rights Digital Library. Alabama Textual Materials Collection. The Harlem Renaissance: What Was It, and Why Does It Matter? On February 28, 2014, Humanities Texas held a one-day teacher professional development workshop in Austin focusing on the history and literature of the Harlem Renaissance.

Professor Cary D. Wintz, Distinguished Professor of History at Texas Southern University, opened the workshop with the following lecture titled "The Harlem Renaissance: What Was It, and Why Does It Matter? " In his remarks, Dr. Wintz addresses the origins and nature of the movement—a task, he says, that is far more complex than it may seem. Dr. What was the Harlem Renaissance and when did it begin? A New African American Identity: The Harlem Renaissance. With the end of the Civil War in 1865, hundreds of thousands of African Americans newly freed from the yoke of slavery in the South began to dream of fuller participation in American society, including political empowerment, equal economic opportunity, and economic and cultural self-determination.

Unfortunately, by the late 1870s, that dream was largely dead, as white supremacy was quickly restored to the Reconstruction South. White lawmakers on state and local levels passed strict racial segregation laws known as “Jim Crow laws” that made African Americans second-class citizens. While a small number of African Americans were able to become landowners, most were exploited as sharecroppers, a system designed to keep them poor and powerless. Hate groups like the Ku Klux Klan (KKK) perpetrated lynchings and conducted campaigns of terror and intimidation to keep African Americans from voting or exercising other fundamental rights.

Video History.com Harlem Renaissance - Roaring Twenties. The northern Manhattan neighborhood of Harlem was meant to be an upper-class white neighborhood in the 1880s, but rapid overdevelopment led to empty buildings and desperate landlords seeking to fill them. In the early 1900s, a few middle-class black families from another neighborhood known as Black Bohemia moved to Harlem, and other black families followed. Some white residents initially fought to keep African Americans out of the area, but failing that many whites eventually fled. Outside factors led to a population boom: From 1910 to 1920, African American populations migrated in large numbers from the South to the North, with prominent figures like W.E.B. Du Bois leading what became known as the Great Migration. Ekwueme Michael Thelwell - The Choices Program. Brown University Ekwueme Michael Thelwell is a visiting professor of Africana studies at Brown University.

African American Odyssey: World War I and Postwar Society (Part 1) The Green Book. The Negro Travelers' Green Book. Search for "" » Zinn Education Project. Roots: The System of American Slavery. The African Roots of MLK’s Vision. Dr. Martin Luther King Jr. had just returned from Africa ecstatic. Alongside African American leaders such as A. Philip Randolph, Adam Clayton Powell, and Ralph Bunche, King was formally invited by Prime Minister Kwame Nkrumah to attend the independence ceremony for Ghana. It was March of 1957, and what he witnessed in Ghana would leave King reinvigorated.

“I could hear that old Negro spiritual once more crying out: ‘Free at last, free at last, Great God Almighty, I’m free at last,’” he told his congregation in his “Birth of a New Nation” sermon in Alabama. A month before his trip, King was disillusioned and in constant pain. “In Alabama… men and women, black and white, sitting peacefully in buses have been attacked by snipers. Splcenter. Gallery. Photographs of Dallas: An online gallery of historic Dallas photographs. Marion Butts Photograph Collection. Untitled. History Hub. Slave Narratives. When Black Lives Mattered: Why Teach Reconstruction. Every day seems to bring new horrors, as President Trump’s racist rhetoric and policies have provided an increasingly encouraging environment for attacks on black people and other communities of color.

Zinn Ed: If We Knew Our History Series (Reconstruction) When Black Lives Mattered: Why Teach Reconstruction By Adam Sanchez Every day seems to bring new horrors as the U.S. president’s racist rhetoric and policies have provided an increasingly encouraging environment for attacks on Black people and other communities of color. Teaching Guide: Exploring the Secession of the Southern States. Five Myths About Reconstruction. Was slavery the engine of American economic growth? The Harlem Renaissance. The Harlem Renaissance – Lesson Plan. By Daniella K. Garran, Marston Mills, Mass. Harlem - Book Overview. Teaching Tolerance - Diversity, Equity and Justice. North American Context · African Passages, Lowcountry Adaptations. "In the Neighborhood": Towards a Human Geography of US Slave Society.

Slavery Fact Sheet: Digital History. The Courage And Ingenuity Of Freedom-Seeking Slaves In America : NPR History Dept. Slavery and Public History: New Museum Depicts 'The Life Of A Slave From Cradle To The Tomb' Student-friendly article on Resistance to Slavery. Slavery Overview: Digital History. World War I and the African-American experience. Reparations for Slavery Reading. Debate with good questions at the end. 20 min. version of Slavery By Another Name. Interactive maps showing spread of slavery: Smithsonian Magazine. NY Times: ‘Aaron Douglas: African-American Modernist’ at the Schomburg Center for Research in Black Culture.