'I know why the caged bird sings'

FREE I Know Why The Caged Bird Sings Plot Summary. Marguerite, or Maya, Johnson is a young black girl growing up in the racist town of Stamps, Arkansas. 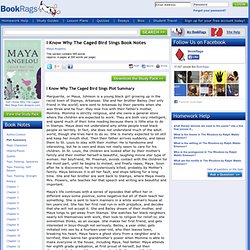 She and her brother Bailey (her only friend in the world) were sent to Arkansas by their parents when she was three and he four: they now live with their father's mother, Momma. Momma is strictly religious, and she owns a general store where the children are expected to work. They are both very intelligent, and spend much of their time reading because there is little else to do in Stamps. Maya does not understand why white people treat black people so terribly. In fact, she does not understand much of the adult world, though she tries hard to do so. Maya's life continues with a series of episodes that affect her in different ways-some positive, some negative-but all of them teach her something.

In California, Maya at first lives with her grandmother, then her mother. Caged Bird by Maya Angelou - Poetry Foundation. I Know Why the Caged Bird Sings by Maya Angelou – review. The caged bird "sings of freedom", writes Maya Angelou in her poem "Caged Bird" – a poignant recurring image throughout her work, as she eloquently explores the struggle to become liberated from the shackles of racism and misogyny. 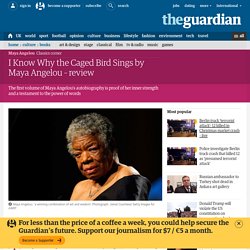 This evocative first volume of her six books of autobiography, originally published in 1969 (1984 in the UK), vividly depicts Angelou's "tender years" from the ages of three to 16, partly in the American south during the depression-wracked 1930s, while also offering timeless insights into the empowering quality of books. The painful sense of being unwanted haunts her early childhood, for when Maya (then known as Marguerite) is three and her brother Bailey four they are sent to the "musty little town" of segregated Stamps, Arkansas wearing tags on their wrists addressed to "To whom it may concern", dispatched by their parents in California who had decided to end their "calamitous marriage".

I Know Why the Caged Bird Sings - Book Reviews. Book ReviewsThe wisdom, rue and humor of her storytelling are borne on a lilting rhythm completely her own, the product of a born writer's senses nourished on black church singing and preaching, soft mother talk and salty street talk, and on literature: James Weldon Johnson, Langston Hughes, Richard Wright, Shakespeare and Gorki.New York Times Book Review Maya Angelou's autobiography was the first book I ever read that made me feel my life as a colored girl growing up in Mississippi deserved validation. 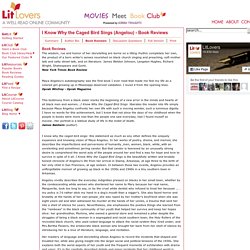 I loved it from the opening lines.Oprah Winfrey - Oprah Magazine. I Know Why The Caged Bird Sings by Maya Angelou. The free bird leaps on the back of the wind and floats downstream till the current ends and dips his wings in the orange sun rays and dares to claim the sky. 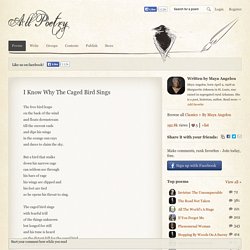 But a bird that stalks down his narrow cage can seldom see through his bars of rage his wings are clipped and his feet are tied so he opens his throat to sing. The caged bird sings with fearful trill of the things unknown but longed for still and his tune is heard on the distant hill for the caged bird sings of freedom The free bird thinks of another breeze and the trade winds soft through the sighing trees and the fat worms waiting on a dawn-bright lawn and he names the sky his own. English - Angelou, Maya: 1928 - 2014. Detailed Review Summary of I Know Why the Caged Bird Sings by Maya Angelou. The Legacy of Dr. Maya Angelou.

Newsweek's Original Review of Maya Angelou’s 'I Know Why the Caged Bird Sings' “What are you looking at me for? 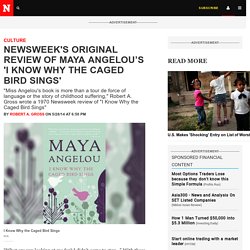 I didn’t come to stay…” With these words—from a poem that she stumbled over during a church recital—Maya Angelou opens her autobiography and conveys the diminished sense of herself that pervaded much of her childhood. The words were painfully appropriate. She and her brother were shuttled back and forth between their mother in the North and grandmother in the small town of Stamps, Ark.

When she was 8, she was raped. She appeared in court, failed to tell the whole truth and, after her assailant was found dead, concluded that her words could kill. Yet, her few years of almost complete silence—she continued to speak to her brother Bailey—actually served her well; Miss Angelou—a former dancer, director and television scriptwriter who is now at work on her second novel—clearly heard, saw, smelled, tasted and seized hold of all the sounds and sights around her. Sign up Sign up to our daily newsletter for up to date global news and features. ‘Preach It!’ Maya Angelou - Poems, Biography, Quotes. Maya Angelou Interview. I Know Why the Caged Bird Sings: Plot Overview. In I Know Why the Caged Bird Sings, Maya Angelou describes her coming of age as a precocious but insecure black girl in the American South during the 1930s and subsequently in California during the 1940s. 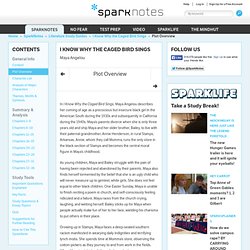 Maya’s parents divorce when she is only three years old and ship Maya and her older brother, Bailey, to live with their paternal grandmother, Annie Henderson, in rural Stamps, Arkansas. Annie, whom they call Momma, runs the only store in the black section of Stamps and becomes the central moral figure in Maya’s childhood. As young children, Maya and Bailey struggle with the pain of having been rejected and abandoned by their parents. Maya also finds herself tormented by the belief that she is an ugly child who will never measure up to genteel, white girls. 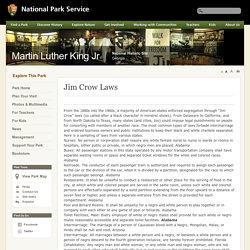 From Delaware to California, and from North Dakota to Texas, many states (and cities, too) could impose legal punishments on people for consorting with members of another race. The most common types of laws forbade intermarriage and ordered business owners and public institutions to keep their black and white clientele separated. Here is a sampling of laws from various states. Nurses: No person or corporation shall require any white female nurse to nurse in wards or rooms in hospitals, either public or private, in which negro men are placed. Alabama Buses: All passenger stations in this state operated by any motor transportation company shall have separate waiting rooms or space and separate ticket windows for the white and colored races.

Barbers: No colored barber shall serve as a barber [to] white women or girls. Encyclopedia of Alabama. Examples of Jim Crow Laws. "It shall be unlawful for a negro and white person to play together or in company with each other at any game of pool or billiards. 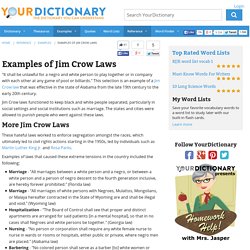 " This selection is an example of a Jim Crow law that was effective in the state of Alabama from the late 19th century to the early 20th century. Jim Crow laws functioned to keep black and white people separated, particularly in social settings and social institutions such as marriage. The states and cities were allowed to punish people who went against these laws.

More Jim Crow Laws These hateful laws worked to enforce segregation amongst the races, which ultimately led to civil rights actions starting in the 1950s, led by individuals such as Martin Luther King Jr. and Rosa Parks. Examples of laws that caused these extreme tensions in the country included the following: Marriage - "All marriages between a white person and a negro, or between a white person and a person of negro descent to the fourth generation inclusive, are hereby forever prohibited. " Jim Crow Laws PPT. The Rise and Fall of Jim Crow. Jim Crow Stories. Jim Crow Laws - Separate Is Not Equal. “Marriages are void when one party is a white person and the other is possessed of one-eighth or more negro, Japanese, or Chinese blood.” 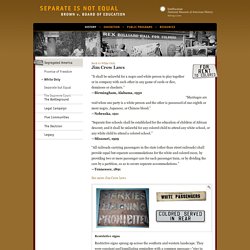 —Nebraska, 1911 “Separate free schools shall be established for the education of children of African descent; and it shall be unlawful for any colored child to attend any white school, or any white child to attend a colored school.” —Missouri, 1929 “All railroads carrying passengers in the state (other than street railroads) shall provide equal but separate accommodations for the white and colored races, by providing two or more passenger cars for each passenger train, or by dividing the cars by a partition, so as to secure separate accommodations.”

—Tennessee, 1891. Jim Crow Museum: Origins of Jim Crow. Jim Crow was the name of the racial caste system which operated primarily, but not exclusively in southern and border states, between 1877 and the mid-1960s. 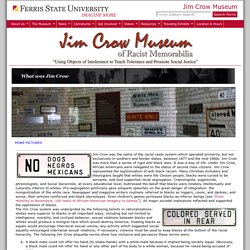 Jim Crow was more than a series of rigid anti-black laws. It was a way of life. Under Jim Crow, African Americans were relegated to the status of second class citizens. Jim Crow represented the legitimization of anti-black racism. Many Christian ministers and theologians taught that whites were the Chosen people, blacks were cursed to be servants, and God supported racial segregation. A black male could not offer his hand (to shake hands) with a white male because it implied being socially equal. Stetson Kennedy, the author of Jim Crow Guide (1990), offered these simple rules that blacks were supposed to observe in conversing with whites: Never assert or even intimate that a white person is lying.