Self-Proclaimed Billionaire Trump Now Begging Small-Dollar Donors For Money. The World Finally Started Cutting Climate Pollution. Now It Needs To Multiply That By 10. Before COVID-19, many countries started slashing emissions, but those reductions require a tenfold increase to keep warming in a relatively safe range, a new study has found. 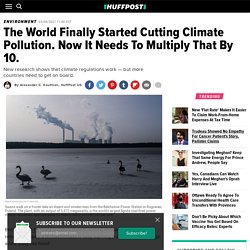 From 2016 through 2019, 64 countries ― including most wealthy nations and one-third of the middle-income bracket ― slashed roughly 160 million metric tons of carbon dioxide per year, thanks to a slate of roughly 2,000 new climate laws worldwide. Keeping the planet from warming to a maximum of 1.8 Celsius above preindustrial levels requires multiplying those cuts by 10, to roughly 2 billion metric tons per year, according to research published Tuesday in the peer-reviewed journal Nature Climate Change. The planet is already 1.1 C hotter than before humans started burning fossil fuels en masse. The findings come at a turning point, when the world is gearing up to recover from the COVID-19 pandemic, which sent emissions in 2020 tumbling by an unprecedented 7% compared to 2019 levels. Black Lives Matter activists return to the streets as George Floyd murder trial begins. The family of George Floyd and Black Lives Matter activists rallied this weekend ahead of the trial for the police officer accused of murdering him, which is set to begin on Monday local time. 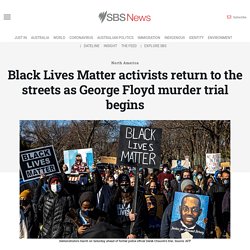 Jury selection is beginning in Minneapolis on Monday in the case against Derek Chauvin, who was filmed with his knee on the 46-year-old black man's neck for nearly nine minutes as he struggled to breathe. Jury selection in the trial of former Minneapolis Police Officer Derek Chauvin starts on Monday. Getty Images North America On Sunday, demonstrators gathered outside Minnesota Governor Tim Walz’s home to call for justice, many saying nothing has changed in the nine months since Mr Floyd's death. “We want a fair shot without having our hands tied behind our backs, a boot on our neck or a gun to our children’s head or our own head," Jonathan McClellan of hte Minnesota Justice Coalition said.

Former police officer Derek Chauvin. 'A dark day for Muslims': Swiss voters approve ban on face coverings in public. A far-right proposal to ban face coverings in Switzerland has been narrowly passed by voters in a binding referendum. 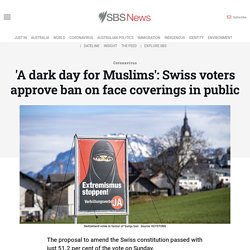 The measure to amend the Swiss constitution passed by with a margin of 51.2 per cent of the vote on Sunday, provisional official results showed. The proposal under the Swiss system of direct democracy does not mention Islam directly and also aims to stop violent street protesters from wearing masks. But local politicians, media and campaigners have dubbed it the burqa ban and a test of attitudes towards Muslims. Australia suspends military ties with Myanmar amid 'grave concerns' over escalating violence. Australia has suspended military co-operation with Myanmar and redirected aid to non-government organisations in response to escalating violence following last month's military coup. 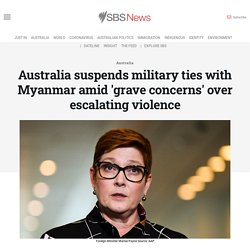 Foreign Affairs Minister Marise Payne is continuing to call for the release of Australian academic Sean Turnell, who has been detained in Yangon for more than 30 days. The government has raised grave concerns about the deadly protests that have occurred since the military seized power from democratically elected Aung San Suu Kyi on 1 February. Victoria announces sexual harassment task force aimed at making workplaces safer for women. Australia vows to continue criticising China's treatment of Uighurs after accusation of hypocrisy. Australia has vowed to continue criticising shocking human rights abuses in China after Beijing suggested the treatment of Aboriginal people made Canberra's position hypocritical. 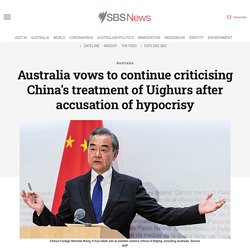 Foreign Minister Marise Payne on Monday signalled she would keep speaking out on China's treatment of Uighur people in Xinjiang. In a media conference on the sidelines of the National People's Congress, China's Foreign Minister Wang Yi took aim at western nations critical of Beijing. "Speaking of genocide, many people would have in their minds the native Americans of the 16th century, African slaves of the 19th century, the Jewish people of the 20th century, and the Aboriginal Australians who are still struggling even today," he said.

"The claim that there is genocide in Xinjiang couldn't be more preposterous. It is just a rumour fabricated with ulterior motives and a lie through and through. " Australian politicians call out sexism in Canberra on International Women's Day. Australian politics is under the spotlight after allegations of rape, sexual assault and sexual harassment have forced leaders to confront what many have described as a toxic culture for women in Canberra. 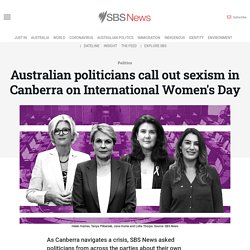 Currently, there are 86 women in the lower and upper houses and 141 men. SBS News asked Liberal Senator Jane Hume, Labor MP Tanya Plibersek, Greens Senator Lidia Thorpe and independent MP Helen Haines about their experiences and whether they would still encourage other women to pursue a career in politics. Labor's new policy would force companies to publicly release gender pay gap data. Labor is calling for greater transparency over the gender pay gap in Australia - vowing to create laws that would require companies to report such data publicly. 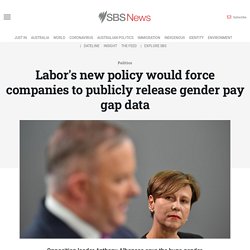 Opposition leader Anthony Albanese announced the move on Monday to coincide with International Women's Day, saying more action was needed to slash Australia's gender pay disparity. He said Labour would set up a searchable pay equity website that would publish pay data from the private sector. Data in February showed the pay gap narrowed to 13.4 per cent in Australia during the coronavirus pandemic. Pacific women breaking stereotypes and cultural norms through surfing. Morrison's response to the allegation against Christian Porter raises uncomfortable questions. Ten years ago this month, the then opposition leader, Tony Abbott, got up to address an angry crowd of "anti-carbon tax" protesters on the lawns outside Parliament House. 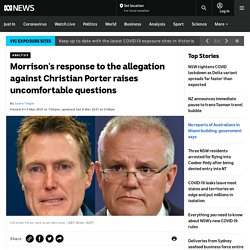 One suspects nobody remembers much of what he said that day, or of what the rally was about. But the images of the placards that he stood in front of have been seared into our political memory and his legacy. "Ditch the Witch," the most famous one read. The broken America that helped put Donald Trump in the White House remains today. Trumpism is alive in America. 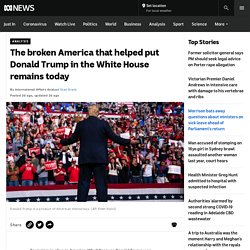 Why? Because Donald Trump was never an aberration, never a vulgar anomaly, never a distortion of American democracy. He is a product of American democracy. Trump returned this week speaking at a conservative political conference and picked up where he left off: still claiming the election was rigged, hinting at running again for president in 2024 and reminding all that he has a hold on the Republican Party. Anger has turned to sadness for Australia's fed-up women. Prime Minister, all you needed to hear was being said right next to you. 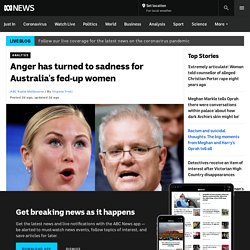 When the Australian of the Year Grace Tame lifted her angry, defiant voice to cry "well, hear me now" after years of being silenced by sexual abuse, Scott Morrison was standing only a few feet away. When she gave her incendiary Press Club Speech in Canberra this week urging sexual assault and abuse survivors like herself to "share your truth, it is your power", the Prime Minister, his Cabinet — with one member off on stress leave and another soon to join her — and all the staff of what might be one of the most toxic workplaces in Australia were just up the hill, in a shining stone building under a slow-waving flag. I'm sure they must have heard her. Tame's voice was trembling slightly that night on Australia Day eve, but the time she has spent since, and also surely the last two weeks that she and the rest of us have gone through, appear to have put even more steel in her call. I'm glad Grace Tame spoke this week. NSW Police Commissioner says historical rape allegation against Christian Porter probably would not have gone to court.

The NSW Police Commissioner says a historical rape allegation against Attorney-General Christian Porter "probably" would not have made it to court even if the alleged victim was still alive. Key points: Mick Fuller says historical assault allegations are difficult to prosecute in any circumstancesChristian Porter denies the allegation and says "it did not happen"Senior minister Marise Payne says holding an independent inquiry would be unprecedented Speaking on Nine Radio, Mick Fuller was asked why NSW Police declared the matter closed. "Unfortunately, in this case, we hadn't been able to take an admissible statement from the [alleged] victim in this matter," he said. "It is not impossible but almost impossible to proceed with a matter like this without the victim. Language, country of birth to be recorded during COVID vaccine and positive tests. Soon, where you were born and what languages you speak will be recorded both when you get a COVID-19 vaccine, or if you test positive to the virus.

Key points: The data will help show the government if communities are avoiding getting vaccinatedIt will be collected in the same way gender and Indigenous background are recordedThe government is still deciding whether it would release the information publicly It is hoped the move will show the government if specific communities are avoiding getting the vaccine, or are being disproportionately affected by the virus. Overseas, data has revealed large differences in who is getting the jab — with ethnic minorities in the US and UK less likely to get the vaccine. Sexual assault counsellor says Christian Porter's accuser told her of alleged rape eight years ago.

The woman at the centre of the Christian Porter rape allegation spoke in detail to a sexual assault counsellor about her claim eight years ago, in what is believed to be the first time she ever disclosed the allegation. Key points: China tells Biden to reverse 'dangerous practice' on Taiwan world politics. Coronavirus: 'Strong positive' COVID-19 result found in SA wastewater. Labor wants to name and shame companies that underpay women.