How Australian wildlife live with bushfires - but the price can be high. Distressing scenes of kangaroos fleeing amid flames, of koalas with singed fur and burnt feet and of animals burnt to death have Australians and people around the world worrying over how devastating the current bushfires will be for our unique wildlife. 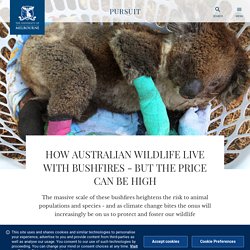 Australia has a long evolutionary history of fire, and its plants and animals have developed many strategies to cope with occasional fire events. Plants, for example, might resprout from structures below ground or be protected by thick bark, or be able to regenerate from seed stored in the soil or protected by woody capsules. But animals have to rely on their mobility. Many can fly, hop or run to unburnt areas, while others might take shelter in burrows or hollow logs, or climb trees to escape the flames. So, how worried should we be about the wildlife impact of the fires? One of the lessons learnt from the 2009 Black Saturday fires in Victoria was that even extreme bushfire events vary in their severity across the landscape. Read more. 'A shape in the ash': Bushfires destroy Australian wildlife. Sydney, Australia - Vickii Lett has been a volunteer wildlife carer in New South Wales (NSW) for 32 years. 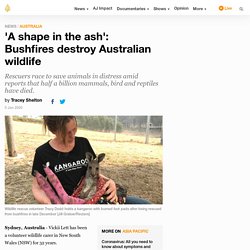 While she says her work can sometimes be heartbreaking, this year she has witnessed Australia's wildlife being wiped out on an unprecedented scale by fires that continue to rage across the country. "The scope of these fires is something we've never experienced before," said Lett, whose work with the Australian wildlife rescue group, WIRES, often involves searching for survivors amid the ashes. "It's heartbreaking to see those injured animals. Bushfires push Australia's rare species to extinction  Ecologists say more than half a billion creatures have been killed by bushfire pushing rare species to extinction as feral cats move in to pick off the starving survivors. 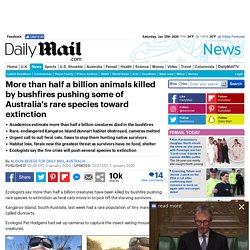 Kangaroo Island, South Australia, last week had a rare population of tiny marsupials called dunnarts. Ecologist Pat Hodgens had set up cameras to capture the insect-eating mouse-like creatures. Pat Hodgens holds up the burnt remains of two cameras set up to capture the rare Kangaroo Island dunnart on Thursday (left). Ecologists are concerned it may now face extinction. Pictured right: Pat Hodgens with a dusky hopping mouse native to arid lands The Kangaroo Island dunnart is a marsupial found only on Kangaroo Island in South Australia. Two fires burnt through the site earlier this week, melting cameras and fences set up to record and protect the rare creatures, and incinerating their habitat.

It is not known how many Kangaroo Island dunnarts survived. Firefighters offer water to thirsty koala during bushfires Loaded: 0% ‘Incomprehensible’: Our Bushfires Are an Ecological Catastrophe. Australia fires: Almost 2,000 homes destroyed in marathon crisis. Media playback is unsupported on your device Almost 2,000 houses have been destroyed in Australia's months-long bushfire crisis, officials say, as crews prepare frantically for worsening conditions. 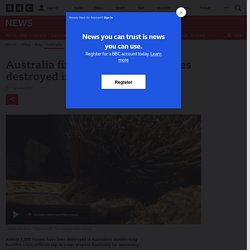 After ferocious conditions last week, firefighters are using milder weather to boost containment lines around fires engulfing south-eastern Australia. Temperatures are likely to soar again on Friday, prompting fears that two fires could form a new "mega blaze". At least 25 people and millions of animals have died since September. Australia is fighting an unprecedented bushfire season, fuelled by record temperatures and widespread drought. Threatened species and ecological communities in Australia. Department of the Environment and Heritage, 2004. 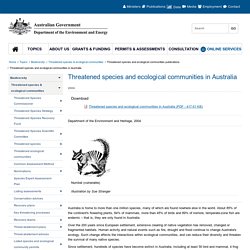 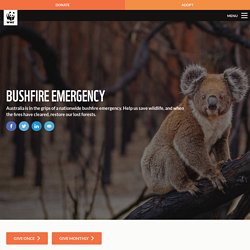 The nation is being ravaged by the most devastating bushfire season the country has ever seen. So far, more than 10.7 million hectares of Australian land have been burned. At least 33 lives have been lost and over 2,700 homes lost. Ten impacts of the Australian bushfires. 1. 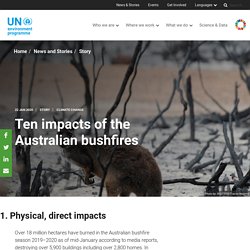 Physical, direct impacts Over 18 million hectares have burned in the Australian bushfire season 2019–2020 as of mid-January according to media reports, destroying over 5,900 buildings including over 2,800 homes. In addition to human fatalities, many millions of animals are reported to have been killed. 2. Ongoing ecological and biodiversity impacts After initial devastation of the fires, impacts are ongoing. 3. As a result of intense smoke and air pollution stemming from the fires, in January 2020 reports indicated that Canberra measured the worst air quality index of any major city in the world. 4. Smoke from wildfires can travel great distances. 5. A billion animals: some of the species most at risk from Australia's bushfire crisis. Australia’s continuing bushfire crisis has taken an enormous toll on wildlife, with huge numbers of mammals, birds, reptiles, insects and other species killed. 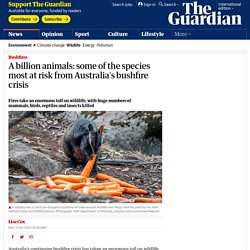 The ecologist Chris Dickman has estimated more than a billion animals have died around the country – a figure that excludes fish, frogs, bats and insects. On Monday, the government announced $50m to help rescue and protect wildlife affected by the crisis and environment groups released a list of fauna species for which they hold immediate concerns. But the list is far from exhaustive and there won’t be a clear picture of the extent of the impact on plant and animal life until experts can access fire-ravaged habitats and conduct assessments. “This is just the tip of the iceberg,” James Trezise, a policy analyst at the Australian Conservation Foundation, says. Australia’s fires are threatening to wipe out unique species. Until last week, the Kangaroo Island glossy black cockatoo was one of Australia’s conservation success stories. 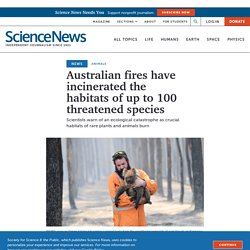 Thanks to a recovery program that began in 1995, its wild population increased from 150 to 400, and its status was downgraded from critically endangered to endangered. Australian animals' bushfire survival tactics save many, but some species are dying en masse. Posted 16 Jan 2020, 8:54pmThu 16 Jan 2020, 8:54pm Scientists warn the megafires on the eastern seaboard will result in the loss of entire species of birds and wildlife. 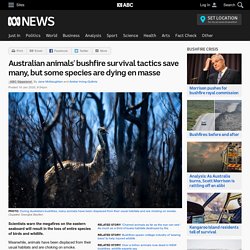 Key points: Australia's Wildlife Was Already in Danger. Read: Australia will lose to climate change None of the researchers I spoke with could think of a historical example where fire literally burned a species out of existence.