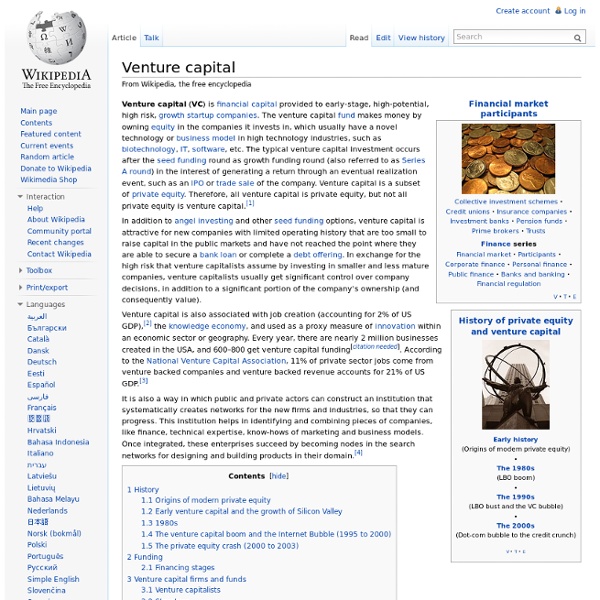 In addition to angel investing and other seed funding options, venture capital is attractive for new companies with limited operating history that are too small to raise capital in the public markets and have not reached the point where they are able to secure a bank loan or complete a debt offering. In exchange for the high risk that venture capitalists assume by investing in smaller and less mature companies, venture capitalists usually get significant control over company decisions, in addition to a significant portion of the company's ownership (and consequently value). Venture capital is also associated with job creation (accounting for 2% of US GDP),[2] the knowledge economy, and used as a proxy measure of innovation within an economic sector or geography. Every year, there are nearly 2 million businesses created in the USA, and 600–800 get venture capital funding. History[edit] Origins of modern private equity[edit] J.H. Early venture capital and the growth of Silicon Valley[edit]

Angel investor An angel Investor or angel (also known as a business angel or informal investor) is an affluent individual who provides capital for a business start-up, usually in exchange for convertible debt or ownership equity. A small but increasing number of angel investors organize themselves into angel groups or angel networks to share research and pool their investment capital, as well as to provide advice to their portfolio companies.[1] Etymology and origin[edit] The term "angel" originally comes from Broadway, where it was used to describe wealthy individuals who provided money for theatrical productions. In 1978, William Wetzel,[2] then a professor at the University of New Hampshire and founder of its Center for Venture Research, completed a pioneering study on how entrepreneurs raised seed capital in the USA, and he began using the term "angel" to describe the investors that supported them.

Private equity - Wiki A private equity investment will generally be made by a private equity firm, a venture capital firm or an angel investor. Each of these categories of investor has its own set of goals, preferences and investment strategies; however, all provide working capital to a target company to nurture expansion, new-product development, or restructuring of the company’s operations, management, or ownership.[2] Bloomberg Businessweek has called private equity a rebranding of leveraged buyout firms after the 1980s. Among the most common investment strategies in private equity are: leveraged buyouts, venture capital, growth capital, distressed investments and mezzanine capital. Search engine optimization As an Internet marketing strategy, SEO considers how search engines work, what people search for, the actual search terms or keywords typed into search engines and which search engines are preferred by their targeted audience. Optimizing a website may involve editing its content, HTML and associated coding to both increase its relevance to specific keywords and to remove barriers to the indexing activities of search engines. Promoting a site to increase the number of backlinks, or inbound links, is another SEO tactic. The plural of the abbreviation SEO can also refer to "search engine optimizers", those who provide SEO services. History Early versions of search algorithms relied on webmaster-provided information such as the keyword meta tag, or index files in engines like ALIWEB.

Startup company Evolution of a startup company[edit] Startup companies can come in all forms and sizes. A critical task in setting up a business is to conduct research in order to validate, assess and develop the ideas or business concepts in addition to opportunities to establish further and deeper understanding on the ideas or business concepts as well as their commercial potential. Business models for startups are generally found via a bottom-up or top-down approach. A company may cease to be a startup as it passes various milestones,[2] such as becoming publicly traded in an IPO, or ceasing to exist as an independent entity via a merger or acquisition. Companies may also fail and cease to operate altogether.

Private equity secondary market - Wiki In finance, the private equity secondary market (also often called private equity secondaries or secondaries) refers to the buying and selling of pre-existing investor commitments to private equity and other alternative investment funds. Sellers of private equity investments sell not only the investments in the fund but also their remaining unfunded commitments to the funds. By its nature, the private equity asset class is illiquid, intended to be a long-term investment for buy-and-hold investors. For the vast majority of private equity investments, there is no listed public market; however, there is a robust and maturing secondary market available for sellers of private equity assets. Craig Venter's new longevity startup will make "100 the new 60" I have always thought that the real secret to improved health isn't down the path of better medicines and reduced drug costs (although these are important goals), but rather through improved healthcare systems that are less costly, and can detect patient health problems earlier through new technologies. The problem with better healthcare systems is that there are so many special interests involved these days that you don't get good outcomes. The Obamacare rollout should have been proof positive of that. The only healthcare system which works is one which allows the supply of medical services to meet the demand for medical services and let the suppliers and consumers sort it out.

Mockup In manufacturing and design, a mockup, or mock-up, is a scale or full-size model of a design or device, used for teaching, demonstration, design evaluation, promotion, and other purposes. A mockup is a prototype if it provides at least part of the functionality of a system and enables testing of a design.[1] Mock-ups are used by designers mainly to acquire feedback from users. Mock-ups address the idea captured in a popular engineering one-liner: You can fix it now on the drafting board with an eraser or you can fix it later on the construction site with a sledge hammer.[2] Applications[edit] Mockups are used virtually everywhere a new product is designed. A few specific examples are the following: