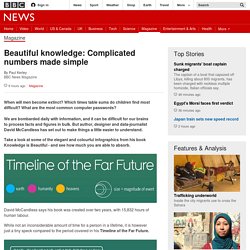 Which times table sums do children find most difficult? What are the most common computer passwords? We are bombarded daily with information, and it can be difficult for our brains to process facts and figures in bulk. But author, designer and data-journalist David McCandless has set out to make things a little easier to understand. Take a look at some of the elegant and colourful infographics from his book Knowledge is Beautiful - and see how much you are able to absorb. David McCandless says his book was created over two years, with 15,832 hours of human labour.

While not an inconsiderable amount of time for a person in a lifetime, it is however just a tiny speck compared to the period covered in his Timeline of the Far Future. Memory Skills HM. The What If...? Box. Lateral Thinking Quiz: KS3/KS4 starter. Lots of lateral thinking puzzles. Lateral thinking. International Quiz (costumes,food,flags+landmarks) How to assess your group work skills.

All employers are keen to recruit graduates who are able to cooperate, solve problems and work in teams. 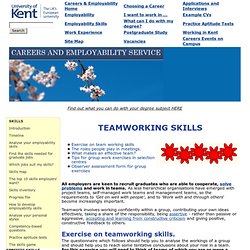 As less hierarchical organisations have emerged with project teams, self-managed work teams and management teams, so the requirements to 'Get on well with people', and to 'Work with and through others' become increasingly important. Teamwork involves working confidently within a group, contributing your own ideas effectively, taking a share of the responsibility, being assertive - rather than passive or aggressive, accepting and learning from constructive criticism and giving positive, constructive feedback to others. Exercise on teamworking skills. The questionnaire which follows should help you to analyse the workings of a group and should help you to reach some tentative conclusions about your role in a team.

For this exercise you will need to think of teams of which you are or were a part. Try to answer the 28 questions as honestly as you can. Your score. Balloon Debates. Below are several examples of balloon debates, so called because the typical example is that of a hot air balloon which is losing height rapidly and will soon crash because it is overweight, therefore you have to get rid of some of the passengers! 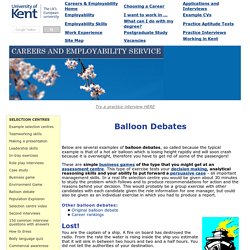 These are simple business games of the type that you might get at an assessment centre. This type of exercise tests your decision making, analytical reasoning skills and your ability to put forward a persuasive case - all important management skills. In a real life selection centre you would be given about 30 minutes to study the problem which follows and to produce recommendations for action and the reasons behind your decision.

This would probably be a group exercise with other candidates with each candidate given the role information for one manager, but could also be given as an individual exercise in which you had to produce a report. Other balloon debates: Lost! You are the captain of a ship. Captain: age 57. Most useful individuals. Bing. BBC Radio 4 - Alex Horne Presents The Horne Section, Series 3, Episode 1, Ben's troublesome record player. Paxman's most memorable Newsnight encounters. 30 April 2014Last updated at 15:42 ET In his 25 years in the Newsnight hot seat, Jeremy Paxman has earned a reputation as one of the most fearless and feared interviewers in the game. 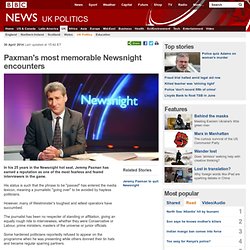 His status is such that the phrase to be "paxoed" has entered the media lexicon, meaning a journalistic "going over" to be avoided by hapless politicians. However, many of Westminster's toughest and wiliest operators have succumbed. The journalist has been no respecter of standing or affiliation, giving an equally rough ride to interviewees, whether they were Conservative or Labour, prime ministers, masters of the universe or junior officials. Some hardened politicians reportedly refused to appear on the programme when he was presenting while others donned their tin hats and became regular sparring partners. Why some English words are controversial in China. 30 April 2014Last updated at 17:04 ET By Yuwen Wu BBC Chinese There are translations for Nokia and Motorola, but not iPad or iPhone in China Nowadays, if you eavesdrop on Chinese people's phone conversations, it is commonplace to hear English phrases popping up here and there, like "Okay", "Cool" and "Bye bye". 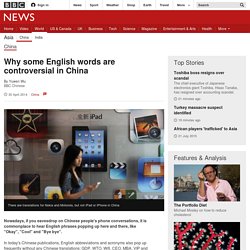 In today's Chinese publications, English abbreviations and acronyms also pop up frequently without any Chinese translations: GDP, WTO, Wifi, CEO, MBA, VIP and the air pollutant term PM2.5 are among the most popular. This phenomenon, termed "zero translation", has sparked a fierce debate, with the Chinese Communist Party's official newspaper People's Daily the latest to join the fray. "Why is zero translation so prevalent? " Exam pressure: What the private tutor saw. 22 April 2014Last updated at 23:19 GMT By Sean Coughlan BBC News education correspondent At the end of your tether? 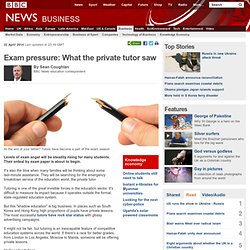