Gene Regulation and the Order of the Operon. 'The Sports Gene': Author Tackles Controversial Aspect of Sports, Genes and Ethnicity. Are athletes really getting faster, better, stronger? Is One African Tribe Producing the World's Best Runners? What is DNA? What is an Allele? Quick Definition. DNA Structure and Function. Learn Biology: How to Draw a Punnett Square. Example punnet square for sex-linked recessive trait. How do personal genetics and athletics intersect? – pgEd. The role of genetic testing in sports continues to grow as technology evolves and as coaches, players, and parents ask themselves “Can my DNA provide me with information relevant to my sport?” 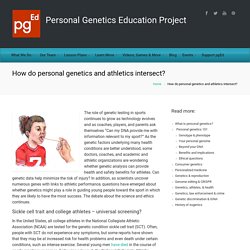 As the genetic factors underlying many health conditions are better understood, some doctors, coaches, and academic and athletic organizations are wondering whether genetic analysis can provide health and safety benefits for athletes. Can genetic data help minimize the risk of injury? In addition, as scientists uncover numerous genes with links to athletic performance, questions have emerged about whether genetics might play a role in guiding young people toward the sport in which they are likely to have the most success. The debate about the science and ethics continues. Sickle cell trait and college athletes – universal screening? In the United States, all college athletes in the National Collegiate Athletic Association (NCAA) are tested for the genetic condition sickle cell trait (SCT).

How genetics could soon become the new frontier for advantage in sport - ABC News. It's a scene straight out of Gattaca — the 1997 futuristic film in which eugenics is used to breed and select American astronauts. 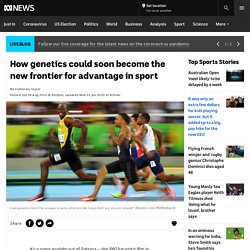 Ethan Hawke plays Vincent, a wannabe space explorer who's held back by the fact he was born the "natural" way and not from a test tube. He's managed to be shortlisted for an expedition to Saturn's moon Titan, using someone else's DNA to rort the system. A machine beeps as Vincent's stolen sample is processed. "Congratulations," a doctor says. "But, what about the interview? " "That was it," the doctor replies. Could it soon be the same for elite athletes, chosen after years of hard work and passion, but selected from birth by the makeup of their genes? Chinese swimming star Sun Yang says his doping days are over, but perhaps there's a different performance advantage coursing through his veins: a "gene for speed". Genetic influence on athletic performance.

Are Olympic athletes just mutants? Genetic influence on athletic performance. Genetics and sport performance: current challenges and directions to the future. Gene editing and the future of doping in sport. WHAT CAN STEM CELLS DO? Why Can't We Experiment On Human Embryonic Stem Cells? What are 'twin studies'? Born to run? How our genes affect our sporting talent. To win the Olympics athletes need dedication, hours of training and lots of perseverance, but they also require one vital ingredient they have no control over: their genes. 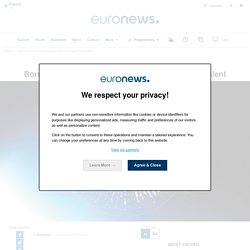 Several studies over the past years have examined the connection between our genes and our sporting ability. Are we born with the genes that will make us excel at certain sports or is it just dedicated training, a good diet and other environmental factors that determine success? According to Dr. Alun Williams, Director of the Manchester Metropolitan University’s Cheshire Sports Genomics Laboratory, scientific evidence suggests that athletic ability is dependent on both genetic and environmental factors. 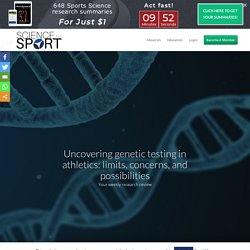 Every coach understands the importance of staying up-to-date with the latest sports performance research like this, but none have the time, energy, or even enjoys spending hours upon hours searching through PubMed and other academic journals. Instead, your precious time is better-spent coaching, programming, and managing all the other more important aspects of your job. The solution… The Performance Digest The Performance Digest is a monthly summary of the latest sports performance research reviewed by our team of hand-selected experts. Coaching ScienceStrength & ConditioningTechnology & MonitoringFatigue & RecoveryYouth DevelopmentNutritionInjury Prevention & Rehab This comprehensive topic base ensures you’re constantly expanding your knowledge and accelerating your career as quickly as humanly possible.

Join the thousands of other coaches who read it every, single month. Want more research reviews like this? Gene manipulation the future of doping in sport. Pigeonetics. DNA Technology: Genetic Screening & Probes. DNA Genetic Testing in Sport. DNA Fingerprinting. DNA Sequencing and PCR.