How Hollywood Is Encouraging Online Piracy. Face it, movie fans: the DVD is destined to be dead as a doornail. 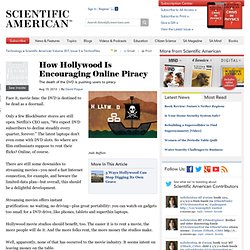 Only a few Blockbuster stores are still open. Netflix's CEO says, “We expect DVD subscribers to decline steadily every quarter, forever.” The latest laptops don't even come with DVD slots. So where are film enthusiasts suppose to rent their flicks? Online, of course. There are still some downsides to streaming movies—you need a fast Internet connection, for example, and beware the limited-data plan—but overall, this should be a delightful development.

Streaming movies offers instant gratification: no waiting, no driving—plus great portability: you can watch on gadgets too small for a DVD drive, like phones, tablets and superthin laptops. Hollywood movie studios should benefit, too. One Million - Brain Overflow. The Struggle Between Copyright and the Internet. | Glyn Moody | January 18, 2012 may well go down as a pivotal date in the history of the Internet – and of copyright. 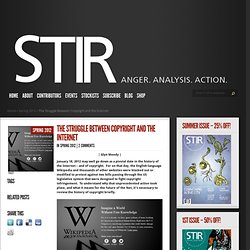 For on that day, the English-language Wikipedia and thousands of other websites were blacked out or modified to protest against two bills passing through the US legislative system that were designed to fight copyright infringement. To understand why that unprecedented action took place, and what it means for the future of the Net, it’s necessary to review the history of copyright briefly. Copyright law has its origins in attempts by the governments of Europe to control and regulate the Internet of its day, the printing press, then still relatively new. In other words, copyright was originally a form of censorship. Should I be worried about piracy? I would discourage worrying of any kind as a general principle. 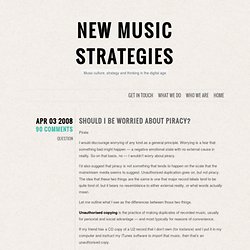 Worrying is a fear that something bad might happen — a negative emotional state with no external cause in reality. So on that basis, no — I wouldn’t worry about piracy. I’d also suggest that piracy is not something that tends to happen on the scale that the mainstream media seems to suggest. Unauthorised duplication goes on, but not piracy. The idea that these two things are the same is one that major record labels tend to be quite fond of, but it bears no resemblance to either external reality, or what words actually mean.

How piracy works. In Praise Of Piracy. I’ve had to think a lot about digital rights management lately. 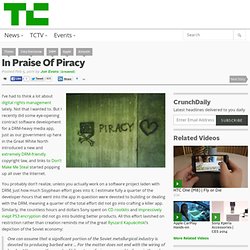 Not that I wanted to. But I recently did some eye-opening contract software development for a DRM-heavy media app, just as our government up here in the Great White North introduced a new and extremely DRM-friendly copyright law, and links to Don’t Make Me Steal started popping up all over the Internet. You probably don’t realize, unless you actually work on a software project laden with DRM, just how much Sisyphean effort goes into it. I estimate fully a quarter of the developer-hours that went into the app in question were devoted to building or dealing with the DRM, meaning a quarter of the total effort did not go into crafting a killer app. Dear Rupert Murdoch: Let’s Talk Piracy & “The Simpsons” Rupert, my son had a simple request. 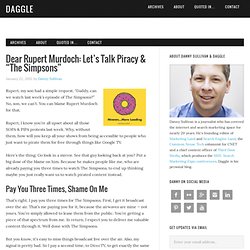 “Daddy, can we watch last week’s episode of The Simpsons?” No, son, we can’t. You can blame Rupert Murdoch for that. Rupert, I know you’re all upset about all those SOPA & PIPA protests last week. Is copyright working? Do You Prefer Copyright or the Right to Talk in Private? Five years ago, when I founded the Swedish and first Pirate Party, we set three pillars for our policy: shared culture, free knowledge, and fundamental privacy. 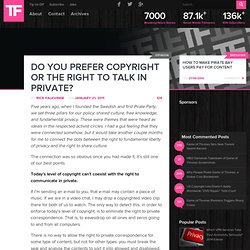 It’s Time to Stop Talking About Copyright. I inaugurated this column in 2008 with an editorial called ‘‘Why I Copyfight’’, which talked about the tricky balance between creativity, culture, and the relationship between audiences and creators. 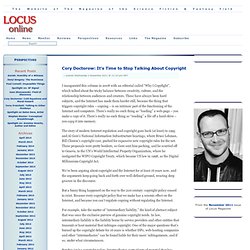 Piracy is NOT Theft: Problems of a Nonsense Metaphor. When talking about piracy the entertainment industry and politicians often use the term "theft. 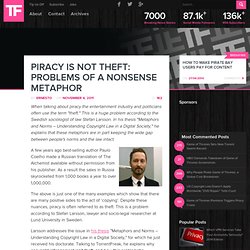 " This is a huge problem according to the Swedish sociologist of law Stefan Larsson. Piracy is the new radio. BitTorrent Piracy Doesn’t Effect US Box Office Returns, Study Finds. A new academic paper by researchers from the University of Minnesota and Wellesley College has examined the link between BitTorrent downloads and box office returns. 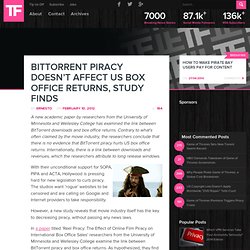 Contrary to what's often claimed by the movie industry, the researchers conclude that there is no evidence that BitTorrent piracy hurts US box office returns. Internationally, there is a link between downloads and revenues, which the researchers attribute to long release windows. With their unconditional support for SOPA, PIPA and ACTA, Hollywood is pressing hard for new legislation to curb piracy. The studios want ‘rogue’ websites to be censored and are calling on Google and Internet providers to take responsibility. However, a new study reveals that movie industry itself has the key to decreasing piracy, without passing any news laws. Music: The Internet’s Original Sin. In a recent Search Engine podcast, host Jesse Brown wondered about music’s ongoing centrality to the debate over file-sharing and freedom. 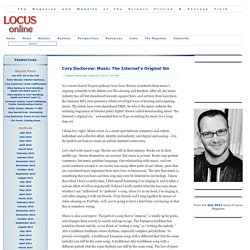 After all, the music industry has all but abandoned lawsuits against fans, and services from Last.fm to the Amazon MP3 store present a robust set of legit ways of hearing and acquiring music. The labels have even abandoned DRM. So why is the music industry the enduring bogeyman of Internet policy fights?