Issue in focus: the impact of intellectual property regimes on the enjoyment ... French | Spanish. 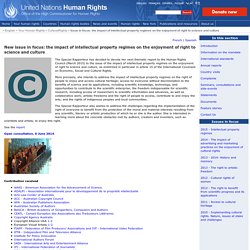 SSRN-id2198934. CopyR in the digital era. Who does the writing and who copies?

Does Copyright Foster or Hinder Innovation? Usages transformatifs : quels enjeux juridiques ? News - The Simpsons “Steal This”, an Episode about Copyright. On January 5th, Fox aired what many are calling the best Simpsons episode of the 25th season so far. 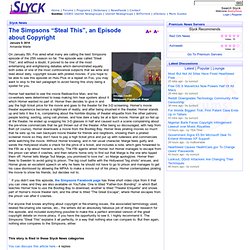 The episode was called “Steal This”, and without a doubt, it proved to be one of the most entertaining and enlightening debates which demonstrated equally both sides of one of the most controversial subjects that we write and read about daily, copyright issues with pirated movies. If you hope to be able to see this episode on Hulu Plus or a repeat on Fox, you may want to skip to the last paragraph to avoid having this story being a spoiler for you. Homer had wanted to see the movie Radioactive Man, and his co-workers were determined to keep making him hear spoilers about it which Homer wanted no part of.

Getting Copyright Right for the 21st Century

We Need to Start Seeing Other Futures... Today is the second day of "Copyright Week! 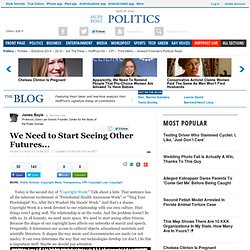 " Talk about a lede. That sentence has all the inherent excitement of "Periodontal Health Awareness Week" or "'Hug Your Proctologist! No, After He's Washed His Hands' Week. " And that's a shame. The Law Belongs In the Public Domain. In the week leading up the two-year anniversary of the SOPA blackout protests, EFF and others are talking about key principles that should guide copyright policy. 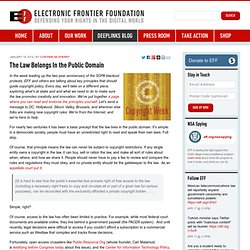 Every day, we'll take on a different piece, exploring what’s at stake and and what we need to do to make sure the law promotes creativity and innovation. We've put together a page where you can read and endorse the principles yourself. Let's send a message to DC, Hollywood, Silicon Valley, Brussels, and wherever else folks are making new copyright rules: We're from the Internet, and we're here to help. For nearly two centuries it has been a basic precept that the law lives in the public domain. 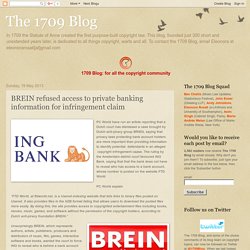 The ruling by the Amsterdam district court favoured ING Bank, saying that that the bank does not have to reveal who has access to a bank account, whose number is posted on the website FTD World PC World explain “FTD World, at ftdworld.net, is a Usenet-indexing website that lists links to binary files posted on Usenet. It also provides files in the NZB format listing that allows users to download the posted files more easily. By doing this, the site provides access to copyrighted entertainment files including books, movies, music, games, and software without the permission of the copyright holders, according to Dutch anti-piracy foundation BREIN.” Copyright Review Principles and Consensus. Zechariah Chafee, a godfather of 20 th century legal philosophy, wrote an influential article on copyright law in the early twentieth century. 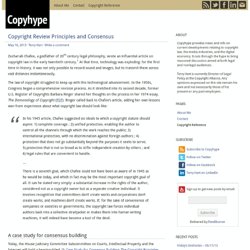 At that time, technology was exploding: for the first time in history, it was not only possible to record sound and images, but to transmit them across vast distances instantaneously. The law of copyright struggled to keep up with this technological advancement. In the 1950s, Congress began a comprehensive revision process.

The US Experience with Copyright Formalities: A Love/Hate Relati

Where Has the "Author" Gone in Copyright? 3D printing and Copy/TM. Jiplp: Editorial: The future of user-generated content is now. Copyright, Property Rights, and the Free Market « Truth on the Market. Over at Cato Unbound, there has been a discussion this past month on copyright and copyright reform. 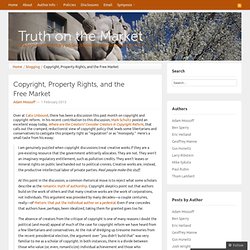 In his recent contribution to this discussion, Mark Schultz posted an excellent essay today, Where are the Creators? Consider Creators in Copyright Reform, that calls out the cramped, reductionist view of copyright policy that leads some libertarians and conservatives to castigate this property right as “regulation” or as “monopoly.” Here’s a small taste from his essay: I am genuinely puzzled when copyright discussions treat creative works if they are a pre-existing resource that the government arbitrarily allocates. They are not. 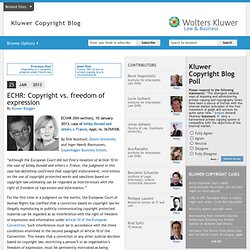 France, Appl. nr. 36769/08. By Dirk Voorhoof, Ghent University and Inger Høedt-Rasmussen, Copenhagen Business School. “Although the European Court did not find a violation of Article 10 in the case of Ashby Donald and others v. Ancillary copyright madness in Germany and France. EU report on Dir 2004 enforcement of CopyR. Commission agrees way forward for modernising copyright in the d.

EDRI the challenge of Copyright in digital era. The Caucus of House Conservatives. New evidence-based copyright reform campaign launched in the US. As this Kat learnt from her own copy of seminal book A to Z of Style, legendary Christian Dior once said: "In town you cannot be dressed without gloves anymore than you can be dressed without a hat". 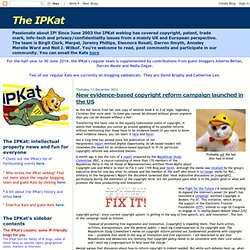 Transferring this basic rule to the equally fashionable realm of copyright, it seems that nowadays you cannot go around speaking of its possible reforms without mentioning that these have to be evidence-based (if you want to know what evidence means, you can learn it here and here) Not a long time has passed since the publication of Ian Hargreaves's report entitled Digital Opportunity. As UK-based readers will remember,the need for an evidence-based approach to IP (in particular copyright) reforms was advocated therein.

Now Fight for the Future ("A nonprofit working to expand the internet's power for good") has launched a campaign entitled Copyright is Broken: Fix It!. "Instead of promoting free expression and innovation, [copyright] is impeding them.

Online piracy, Content ID and the role of intermediaries: is this the right direction? A few days ago the Wall Street Journal - this serious blogger's favourite and only (well, sort of) publication in her spare time - published an interesting article discussing the presence of illegally uploaded films on YouTube and asking a question which also 1709 Blog readers might have had for some time now: why isn’t YouTube's Content ID used by rights owners as widely as one might expect to identify and block illicit contents from YouTube? 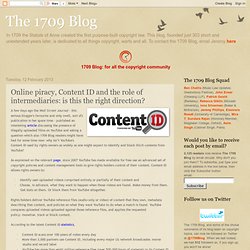 As explained on the relevant page, since 2007 YouTube has made available for free use an advanced set of copyright policies and content management tools to give rights holders control of their content. Content ID allows rights owners to: · Identify user-uploaded videos comprised entirely or partially of their content and · Choose, in advance, what they want to happen when those videos are found. Make money from them. . · Content ID scans over 100 years of video every day · Over a third of YouTube's total monetised views come from Content ID. Spotify now available in Italy: this is the way to go. It was only yesterday that I wrote a post in which I ventured to say that the future of entertainment industry relies on the introduction of innovative services, rather than anti-piracy campaigns that in some cases have come to resemble Don Quixote-sque attacks on digital windmills. So I have to say that I was quite delighted when I read on main Italian newspapers (eg here and here) that since yesterday Spotify is available also in the Bel Paese (the country, not the cheese).

Indeed, as commented by the Huffington Post, for Italian music lovers the launch of Spotify felt like Chistmas day. Besides Italy, yesterday the popular music-streaming service which was first launched in Sweden in 2008 became available also in Portugal and Poland, thus reaching the number of 20 countries around the world where consumers can access it. The model proposed by Spotify has become highly successful. A Battle Against the SOPA/PIPA Prohibition. So much has been said, wrote, battled about the Stop Online Piracy Act and its twin Protect IP Act. I have curated diverse views on SOPA/PIPA on my Pearltrees. The Ministry of Sound is currently unavailable !! Thanks to Lilian Edwards for pointing to this : ‘ACS:Law gets more of copyright fines than rights holders‘. Of course, rightss holders not to be confused with the artists. ‘Anonymous DDoS attack takes out Ministry of Sound‘ Davenport passed it onto ACS:Law who passed it onto Gallant Macmillan, acting on behalf of Ministry of Sound.

According to the Guardian, Gallant Macmillan law firm has been ‘seeking a court order to obtain personal details of hundreds of Plusnet customers. • 4.55pm: BT had its adjournment in the hearing of Ministry of Sound vs. Copyright and Trademark research and experts. UK reform of CopyR. CopyR in the digital era. ISPs and CopyR. Law Professors Urge Congress to Reject PROTE. This Week on Copyright. Lawrence lessig video. Debates: Copyright and wrongs: Guest.