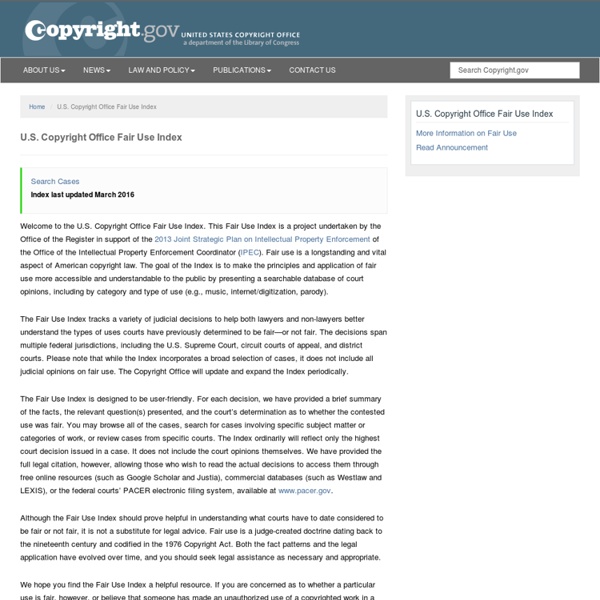 The Educator's Guide to Copyright and Fair Use A five-part series When it comes to copyright law and the application of fair use exceptions, ignorance is definitely not bliss! Learn how to educate yourselves and your students and avoid making a costly mistake! You really did plan to find time over the summer to familiarize yourself with the latest information on copyright law. You absolutely intended to look up the fair use guidelines for using technology resources. So now you have a student who wants to include audio of a Beatles song in a multimedia presentation about the 1960s, another who wants to include the poem "Casey at the Bat" in a report on the World Series, and a third who wants to post photographs of Biden and Obama to the class Web site. What's an educator to do? Click Part 1: Copyrights and Copying Wrongs below to begin. Who Said That? Article by Linda Starr Education World® Copyright © Education World

It’s all C.R.A.P.: Four Principles of Design | THINKblog What a bunch of C.R.A.P.! There are four principles of design that we want you to get under your belt. If you’re a designer, you’ll know this stuff already. It’s like you’ll have some secret superpower. Watch the video, read the stuff below, and suggestion: if you haven’t ever seen this stuff before, print it out, put it on the wall, and absorb! The 4 Principles of Design Follow these four rules for better design! C. is for Contrast. Creating contrast for elements means that discrete elements stand out. R. is for Repetition. Repetition, for instance making a header and footer the same color, makes scanning a website easier. A. is for Alignment. Columns within a page makes it easier to scan horizontally. P. is for Proximity. Proximity means that things are associated with one another – or not. Tell you what, just watch the C.R.A.P. video, OK? – Gregory and Mark

APFN MESSAGE BOARD - China wants a One World Currency too Henk Ruyssenaars July 13th 2009 - In a publication by William Pesek, Bloomberg's 'news' columnist in Tokyo, Pesek wrote about the development in the US/China relations, and the fact that China wants a 'One World Currency' too, some kind of 'global framework' to keep the money flow going. The reason, Pesek wrote, was that the $17 Trillion debt would result in a 'Divorce' between the two, which ''won’t be a pretty one.'' "What may be necessary is a global framework or pact, to end the dollar’s dominance. "Returning from China last month, U.S. "China is beginning to cancel Congress’s credit card," he told Fox News on June 10. But the Chinese know all this, and 'help' with their propaganda to guide towards - what they think too - is a profitable solution: profitable for the banks of course. In a report from the world's monetary flow and usury institute, the criminal Rothschild BIS cartel says - in between the lines - the same as China: that more control is needed. And China knows this too...

Summary of current copyright law as it pertains to email, web sites, mineral clubs, club newsletters. Photographs, text and video are all copyrighted the moment they are created. No action is required by the creator of photographs, text or video in order to protect their works. All creative works are protected instantly. Using any images or articles from johnbetts-fineminerals.com or allminerals.com is forbidden without written permission. As an author I have had many instances where my photographs and articles have been reprinted without my permission. Misconception #1: An article or photograph does not have a "C in a circle" symbol, therefore it is not copyrighted. Fact: According to the World Intellectual Property Organization (WIPO) "The laws of almost all countries provide that copyright protection starts as soon as the work is created." Misconception #2: An article was less than 250 words, therefore we can use it freely. Fact: An article, column, paragraph or sentence are all equally protected by copyright law regardless of length. Fact: This is another misunderstanding. Conclusion

4Teachers : Main Page Standards Education technology standards to transform learning and teaching The time for major change in education is now. In a world where rapid advances in technology have a profound impact on the ways we work, communicate and live, education has struggled to keep pace. The ISTE Standards work together to support educators, students and leaders with clear guidelines for the skills and knowledge necessary to move away from the factory model. These are not the typical boxes educators need to check. They provide a framework for rethinking education, adapting to a constantly changing technological landscape and preparing students to enter an increasingly global economy. Empowering connected learners in a connected world As educators, we are preparing students for a future that we cannot yet imagine. Want to know more? How can the ISTE Standards be used? Visit permissions and licensing.

The Khazars, Magyars, Rothschilds and Sumer. (David Icke Guide To The Global Conspiracy) « Zionism (Rothschild-ism): the fake ‘history’ The movement created by the Rothschilds to lay false claim to the land we call Israel or Palestine is known as Zionism. This term is often used as a synonym for Jewish people when it is actually a political movement devised, funded and promoted through the House of Rothschild and opposed by many Jews. The most visible Zionist front in the United States today are the so-called ‘Neoconservatives’ or ‘Neocons’, who were behind 9 /11 and the invasions of Afghanistan and Iraq. Zionists claim quite simply that the Old Testament says that ‘God’ made the Jews his ‘Chosen People’ and gave them the ‘Promised Land’ of Israel. Therefore, it belongs to them, no debate necessary. As Golda Meir, the former Israeli Prime Minister, said in the French newspaper, Le Monde, in 1971: ‘This country exists as the fulfilment of a promise made by God Himself. Sumerian ‘Jews’ You might recall from earlier that Sumer was known in southern Africa as ‘Sumaru’.

Pinterest continues to address copyright issues and adds Flickr attribution Due to a great deal of whiny criticism about copyright issues, Pinterest has introduced a new attribution system with the help of sites like Flickr, Vimeo and YouTube. Over the past few months, as interest in Pinterest has grown and grown and GROWN, many issues have been raised about whether users really have a right to pin anything they please. Some individuals and businesses raised valid points about their work being taken and used without attribution, whereas others were just jumping on the "Pinterest is bad" bandwagon and made us want to set the internet on fire. In response to some of these concerns the popular pinning platform updated its terms of service, gave everyone a way to block 'pinning' on their website and has today launched a new way of attributing those who originally created content. The Pinterest blog post states: "Attribution appears below the pin's description and provides a permanent link to the work, its author, and where they host their content. [Via Pinterest]