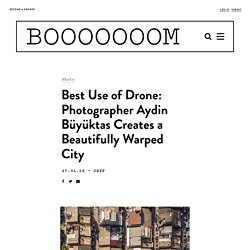 Büyüktas must have loved Inception. More images below! Cross Road Blues - Photographs by Oli Kellett. The pervasive beauty of street photography lies in its ability to frame our disregarded surroundings as centre stage during a lively performance. 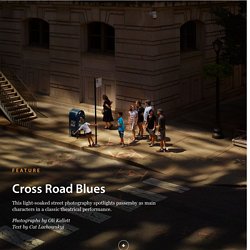 Everyday passersby become the lead and supporting roles in a relatable screenplay about daily life, freezing interesting candid moments into a set of narrative stills that might have otherwise gone overlooked. For photographer Oli Kellett, this genre is pushed a step further in his series Cross Road Blues, where vibrant pockets of natural light poke through surrounding architecture to spotlight his subjects, as though they are delivering a crucial set of lines during a play. [NSFW] Guro: The Erotic Horror Art of Japanese Rebellion. The timelapse videos that show how beauty as we know it is a lie. Many of the images we see in glossy magazines and adverts are retouched. 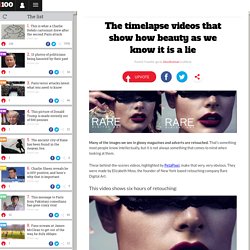 That's something most people know intellectually, but it is not always something that comes to mind when looking at them. These behind-the-scenes videos, highlighted by PetaPixel, make that very, very obvious. Spotlight #17: Daniele Valeriani on his dark digital work - Bleaq. I’m a big movie fan, two of my favorite genres being horror and sci-fi. 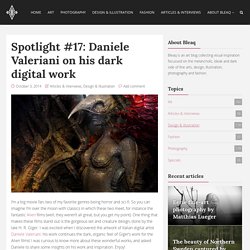 So you can imagine I’m over the moon with classics in which these two meet, for instance the fantastic Alien films (well, they weren’t all great, but you get my point). One thing that makes these films stand out is the gorgeous set and creature design, done by the late H. R. Giger. Jeff Wall: 'I'm haunted by the idea that my photography was all a big mistake' “In my time, I’ve been accused of being afraid to go out into the world to take pictures, like a so-called ‘real’ photographer does,” Jeff Wall tells me, smiling. 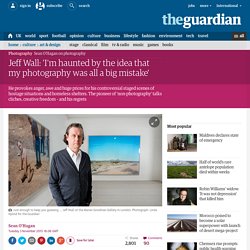 “And I’ve been accused of making art with a capital A – as if that, too, was a crime.” Walking around his big, bright new exhibition at the Marian Goodman Gallery in London, it is hard to see why these suspicions of Wall’s elaborately staged images still linger, 37 years after they first went on show. We Thought These People Looked Weird. A Closer Look Left Us Absolutely Speechless. January 6, 2014 in Art, Body Art, Carving, Installation, Painting, People, Realism, Sculpture OK well the title of this blog is a little misleading as we’ve known about Australian ex-pat Ron Mueck‘s works for some time and have been speechless every time we’ve had the opportunity to see them in “the flesh”. 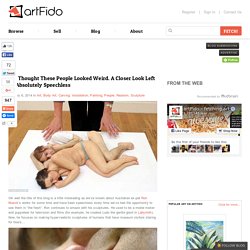 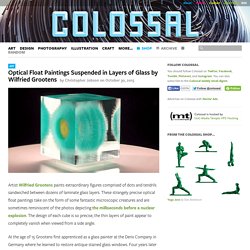 These strangely precise optical float paintings take on the form of some fantastic microscopic creatures and are sometimes reminiscent of the photos depicting the milliseconds before a nuclear explosion. The design of each cube is so precise, the thin layers of paint appear to completely vanish when viewed from a side angle. At the age of 15 Grootens first apprenticed as a glass painter at the Derix Company in Germany where he learned to restore antique stained glass windows. Four years later he left on a near decade-long adventure to travel the world, play music, and experience the cultures of Asia and South America before eventually returning to his work with glass. The 1950s Space Age style known as Googie lives on forever. Ben Ridgway's Animations are the Closest Thing to a LSD Experience. With his work, university professor and artist Ben Ridgway invites viewers to make personal connections to the audio and visual without relying on narrative or spoken language. 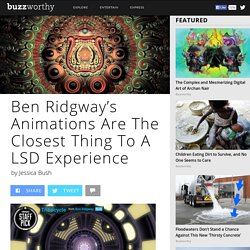 His animations are hypnotic explorations of nature and mechanics that take viewers on a journey that is hard to describe. We caught up with Ben for some insight on his wonderful art. How do you hope to affect the viewer with your animation pieces? When someone watches my films I hope it invokes a sense of awe and personal connection to the abstract worlds I present. Does the blockchain lead to more transparency? @Aram Bartholl, "Point Of View", 2015 Copyright has been a relevant topic since the development of the printing press. 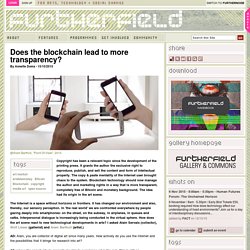 It grants the author the exclusive right to reproduce, publish, and sell the content and form of intellectual property. The copy & paste mentality of the Internet user brought chaos to the system. Blockchain technology should now manage the author and marketing rights in a way that is more transparent, completely free of Bitcoin and monetary background. The idea had its origin in the art scene. The Internet is a space without horizons or frontiers. These 93 Google Street View Pictures Are Hilarious. The street view on Google Maps is a great feature, especially for checking out places you've never been before. 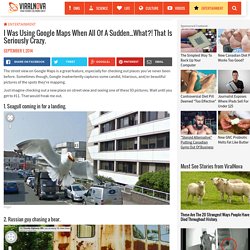 Sometimes though, Google inadvertently captures some candid, hilarious, and/or beautiful pictures of the spots they're mapping. Just imagine checking out a new place on street view and seeing one of these 93 pictures. Wait until you get to #11. Vertical Panoramic Photographs of New York Churches by Richard Silver. Church of St. Vincent Ferrer Richard Silver (previously) has a unique way of looking at architecture, building composite photographs from several images that seamlessly reveal a structure’s interior.

His new series captures the insides of New York churches, and are perfectly timed for the Pope’s impending arrival on U.S. soil. Disturbing Animal Sculptures Inspired By The Darkest Human Emotions. Beth Cavener encases human emotions in forest animal forms. These sculpture are made from stoneware on various metal frames. Cavener creates these animals in forms all too human, to “embody the consequences of human fear, apathy, aggression, and misunderstanding”. She strips human psychological expression of context and shows them in uncanny detail. The Strange Beauty of Soviet Bus Stops. Alex Garant’s Double-Eyed Oil Paintings.

Canadian artist Alex Garant paints realistic portraits that capture her subjects in multiples. Using traditional portrait techniques, her oil paintings combine graphic design elements with abstraction in great detail. Looking at her work is like getting lost in an optical illusion, where colorful patterns are key to holding the composition together. Among her stylistic inspirations, she credits early ink printing, Pop surrealism, Baroque tapestries and themes found in retro kitsch. Journalist Spends Four Years Traversing India to Document Crumbling Subterranean Stepwells Before they Disappear. Across India an entire category of architecture is slowly crumbling into obscurity, and you’ve probably never even heard it. Such was the case 30 years ago when Chicago journalist Victoria Lautman made her first trip to the country and discovered the impressive structures called stepwells.

Like gates to the underworld, the massive subterranean temples were designed as a primary way to access the water table in regions where the climate vacillates between swelteringly dry during most months, with a few weeks of torrential monsoons in the spring. India’s Forgotten Stepwells. India's Forgotten Stepwells It’s hard to imagine an entire category of architecture slipping off history’s grid, and yet that seems to be the case with India’s incomparable stepwells. Never heard of ‘em? Don’t fret, you’re not alone: millions of tourists – and any number of locals - lured to the subcontinent’s palaces, forts, tombs, and temples are oblivious to these centuries-old water-structures that can even be found hiding-in-plain-sight close to thronged destinations like Humayun’s Tomb in Delhi or Agra’s Taj Mahal. But now, India’s burgeoning water crisis might lead to redemption for at least some of these subterranean edifices, which are being re-evaluated for their ability to collect and store water.

With any luck, tourist itineraries will also start incorporating what are otherwise an “endangered species” of the architecture world. Learn more about these stepwells' curious histories, after the break... Beautiful Depravity: The Art of Toshio Saeki. Takato Yamamoto's "Heisei Estheticism"

Selected from more than 17,000 global entries in the categories Travel Portraits, Outdoor Scenes, Sense of Place and Spontaneous Moments, Anuar Patjane Floriuk took home the grand prize for his incredible underwater shot of divers swimming close to a humpback whale near Roca Partida, an island off of the western coast of Mexico. High Street Shops In Sci Fi Films. We Worked Out How To Generate The Trippiest Images With Google's Deepdream. The 1950s Space Age style known as Googie lives on forever. Guillaume Lachapelle’s Mirrored Dioramas Create the Illusion of Infinite Space. A History of the London Tube Maps. Please note that if anyone knows different or finds a mistake, no matter how trivial, regarding the details given below, I would be glad to hear from you via the guest book on the home page (link above). London Underground Tube Diary - Going Underground's Blog.

BBC2's The Tube documentary will help to make that fascination with what goes on beneath our streets even stronger. Matt Brown from The Londonist has recently been experimenting with Google Sketchup to see what a 3D Tube Map would look like. Photographer Víctor Enrich Imagines the Same Building in Munich Configured in 88 Ways. An Art Student Designed a 10,000-Year Plan for London. Images courtesy the artist For the recently-sold Mount Pleasant site in Farringdon, London, once the home to one of the largest mail sorting offices in the world, the development of 700 Mayor Boris Johnson-approved apartments comes much to the dismay of nearby residents. In response to Johnson's decision to turn the site into one of the biggest developments in the city, British arts student Alice Theodorou has designed a 10,000-year masterplan, The Future Will Just Have to Wait, which explores an alternative scenario for Mount Pleasant.

Disturbing (But Amazing) Pictures Expose The Absurdities Of Modern Culture *Warning: Graphic Images* Foodscapes - Carl Warner. 50 Completely Unexplainable Stock Photos No One Will Ever Use. 42 Magically Restored Images From The Past That Will Leave You Speechless InyMiny. [Longreads] The Complexities of Drones in Art. A CGI Monkey Sees Sounds and Hears Colors in This Synesthesia-Inducing Film. #KillerMinimal Instagram Photos Look Like Cotton Candy.