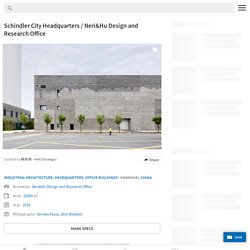 The resulting architectural proposal is two-part, a continuous base at ground level and floating lightboxes above. At the north-east end of the site, the base podium rises and grows in height to form the Research & Development facility. The two architectural elements that comprise the project are not only functionally unique but expressed in vastly different material palettes.

Foster + Partners crowns The House of Wisdom with cantilevered roof. NOAN creates timber wedding chapel in Finnish woodland. Architecture studio NOAN has designed a chapel within a forest overlooking a lake at the Tervajärvi campground in southern Finland. 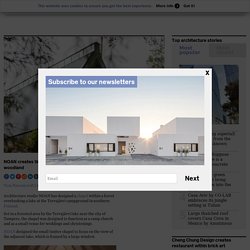 Set in a forested area by the Tervajärvi lake near the city of Tampere, the chapel was designed to function as a camp church and as a small venue for weddings and christenings. NOAN designed the small timber chapel to focus on the view of the adjacent lake, which is framed by a large window. "The core concept was for a simplified multifunctional space with an opening that frames the unique view to the lake," said NOAN founding partner Lassi Viitanen.

"The view works as an altarpiece for the chapel. The sliding doors opening mirrors the shape of the altar opening and makes the space flow through and connect the interior with the surroundings," he told Dezeen. Tea Room / Natura Futura Arquitectura. Tea Room / Natura Futura Arquitectura Share FacebookTwitterPinterestWhatsappMail Or Area: 32 m² Year: 2021 Photographs: JAG Studio. 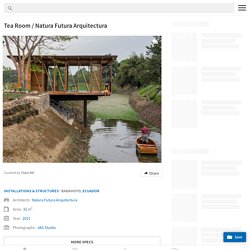 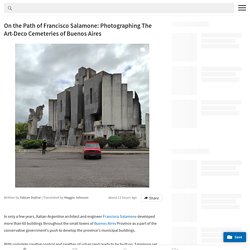 With complete creative control and swathes of urban land ready to be built on, Salamone set to work designing everything from plazas, public buildings, and slaughterhouses to perhaps his most famous works--art-deco cemeteries. Paths and playgrounds connect classrooms at Erdu Primary School. Zaha Hadid Architects unveils Zhuhai Jinwan Civic Art Centre in China.

A roofscape modelled on patterns of migratory birds will shelter the four wings of the Zhuhai Jinwan Civic Art Centre that Zaha Hadid Architects is developing in southern China. 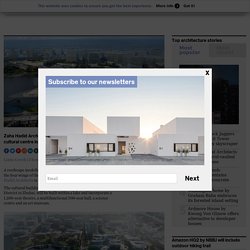 The cultural building, which is under construction in the Jinwan District in Zhuhai, will be built within a lake and incorporate a 1,200-seat theatre, a multifunctional 500-seat hall, a science centre and an art museum. According to Zaha Hadid Architects, the goal for the building is for it to become "a hub of contemporary creativity" for the region. Its site was therefore chosen for its proximity to the new Zhuhai Airport Intercity railway, which connects the city, its airport and Hengqin district to Guangzhou, Shenzhen, Macau and Hong Kong.

Once complete, the Zhuhai Jinwan Civic Art Centre will measure 170 metres in width and 270 metres in length, from north to south. These four venues will be arranged symmetrically around a central plaza, which will serve as a shared, external foyer. Marks Barfield Architects designs Cambridge Central Mosque. Marks Barfield Architects has designed a sustainable mosque in Cambridge that draws on local architecture while incorporating traditional Islamic design aspects, including geometric patterns that symbolise the infinite. 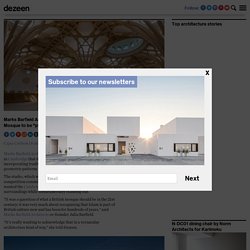 The studio, which won the project in an international competition commissioned by the Cambridge Mosque Trust, wanted the Cambridge Central Mosque to be respectful of its surroundings while simultaneously standing out. "It was a question of what a British mosque should be in the 21st century; it was very much about recognising that Islam is part of British culture now and has been for hundreds of years," said Marks Barfield Architects co-founder Julia Barfield. "It's really wanting to acknowledge that in a vernacular architecture kind of way," she told Dezeen. The studio embodied this vision in the very structure of the 2,340-square-metre mosque, using timber to create tree-like pillars that join to form an interwoven, octagonal canopy that holds up its roof. Project credits: Abin Design Studio creates terracotta-brick community centre in Bansberia. 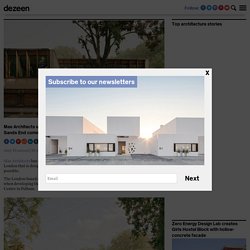 The London-based studio had the circular economy in mind when developing the design for Sands End Arts and Community Centre in Fulham. A circular approach to architecture means keeping both buildings and their materials in use as long as possible, and minimising the waste and pollution of construction and demolition. With this in mind, Sands End has a flexible interior, which not only allows it to accommodate different functions and activities, but also means the building could easily be adapted in the future if necessary.

The structure is built from materials with low embodied energy, including timber and a specialist brick made out of construction waste. Recyclable fixings were also chosen where possible; for instance, bolts were favoured over glue. "It was imperative to use materials that seemed best suited to simple construction," he said. Openscope gently frames california's better place forest. MAD completes Yabuli Entrepreneurs' Congress Center in China. Chinese architecture studio MAD has revealed the recently completed Yabuli Entrepreneurs' Congress Center, which is surrounded by mountains in northeast China. 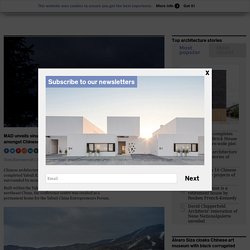 Built within the Yabuli ski resort near the city of Harbin in northeast China, the conference centre was created as a permanent home for the Yabuli China Entrepreneurs Forum. According to MAD, the building was designed to be a landmark structure that would represent the "entrepreneurial spirit" of the business organisation. "We envisioned a building embedded in the mountain forest, a place of strong vitality and creativity to embody the entrepreneurs' boldness and wisdom," said the studio. The four-storey building is built around a large 1,000-seat auditorium that occupies one side of the venue, while a series of smaller auditoriums, an exhibition hall and meeting rooms are on the other. 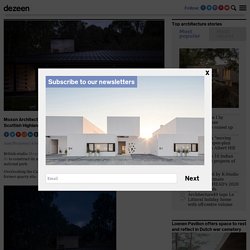 Overlooking the Cairngorms National Park, the office occupies a former quarry site, which most recently was used as a tip. Moxon Architects founder Ben Addy saw the potential to transform this wasted site into a building that complements the natural landscape, and also takes advantage of its scenic outlook. The building he and his team designed and built, Quarry Studios, does exactly that. It is built from simple materials – locally sourced timber, cast concrete and stone gabion walls – and features large windows overlooking the highland countryside. "The disused quarry was only a short walk away from our previous space," explained Addy, "and it kept playing on the mind.

" Loenen Pavilion installed in Dutch war cemetery by Kaan Architecten. Kaan Architecten has built a pavilion to commemorate Dutch victims of the second world war, with thickset walls that strategically frame views of the trees and sky. 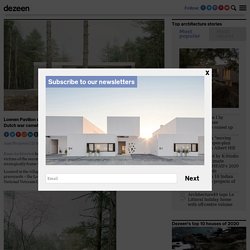 Located in the village of Loenen, the building sits between two graveyards – the Loenen National War Cemetery and the new National Veterans Cemetery. Kaan Architecten's aim was to give visitors a space for rest and contemplation, with a building that embodies both openness and enclosure. With its stone-clad walls and heavy concrete roof, Loenen Pavilion seeks to create a close relationship between architecture and landscape, by creating framed apertures of the birch and pine trees that surround. Some walls fold outwards at the base, creating informal benches around the building's perimeter. "The serene atmosphere and lack of intrusiveness have been achieved by sensitive architectural gestures, proposing an intimate yet open and inviting building, obscured by tree trunks yet in clear view," said Kaan Architecten.

This creates gaps for natural light to enter into the galleries inside the 164,000-square-foot (15,200-square-metre) building. "The Texas sky opens 180-degrees overhead above a luminous canopy covering the new building," said Steven Holl Architects. "Concave curves, imagined from cloud circles, push down on the roof geometry, allowing natural light to slip in with precise measure and quality, perfect for top-lit galleries.

" One architect's vision of the Donald J. Trump Presidential Library. Coinciding with Election Day on Tuesday, November 3, 2020, DJTrumpLibrary.com was finally updated. The website includes 3D renderings of a proposed version of the 45th President's Presidential Library. Located at 1 MAGA Lane in Nogales, Arizona — abutting the US-Mexican border — the facilities would include a COVID Memorial, with a reflecting pool that looks out towards the Alt-Right Auditorium, which features weekly screenings of Birth of a Nation and other films. Photos reveal Tadao Ando's completed He Art Museum in China. New photos have been released of Pritzker Prize-winning architect Tadao Ando's cylindrical He Art Museum, which has reached completion in Guangdong, China. The He Art Museum, otherwise known as HEM, is made from a stack of staggered, concrete disks that wrap around a pair of sweeping helical staircases at its centre.

It was designed by Ando as a landmark for the region and is one of the five projects shortlisted for cultural building of the year for Dezeen Awards 2020. The He Art Museum was commissioned by Midea Group director He Jianfeng, son of billionaire He Xiangjian, as the home for He family's contemporary Chinese art collection. Ando's design evolved from the family's name, He, which translates means harmony, balance and union.

"I hope HEM will become a new cultural landmark in the Canton region, at the same time, a meeting point and a harmonious space for all," said Ando. Colonnade links educational facilities at Boys and Girls Club in Mexico. A sweeping colonnade and stepped plazas animate the concrete Boys and Girls Club that Centro de Colaboración Arquitectónica has built for children living in south-central Mexico. The 3,400-square-metre complex is an after-school club for young people between the ages of six and 18 years who are living in unsafe or low-income neighbourhoods in Tecámac and Ecatepec. It comprises three buildings that host a mix of recreational and educational facilities, linked by a corridor of 24 arches that Centro de Colaboración Arquitectónica (CCA) said is modelled on human vertebrae.

Nieto sobejano nestles arvo pärt centre in a dense estonian forest of pine trees. The Mizpah Hotel – Tonopah, Nevada. Petr stolín builds transparent kindergarten of glass fiber in the czech republic. Dezeen's top 10 museums and galleries of 2018. Atlasobscura. Dezeen. A Timely Remembrance For Witch Hunts Of The Past by Louise Bourgeois and Peter Zumthor. KVDK architects' lisse art museum sits on top of a historic dike in the netherlands.