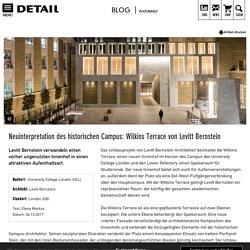 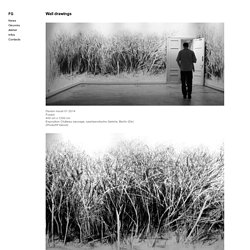 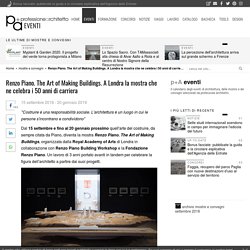 Sans titre. Help us swim against the tide. 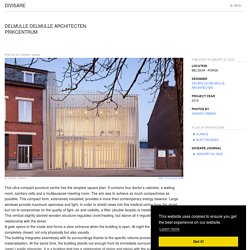 Join us in taking a stand against the short attention architecture media. Divisare is the result of an effort of selection and classification of contemporary architecture conducted for over twenty years. Patient work, done with care, image after image, project after project, to offer you the ideal tool with which to organize your knowledge of contemporary architecture. Instead of a quick, distracted web, we want a slow, attentive one. Instead of hastily perused information, we prefer knowledge calmly absorbed.

Sans titre. Haibing Center of Nankai University aims to provide the old campus with a multi-functional cultural space for students, faculties and alumni. 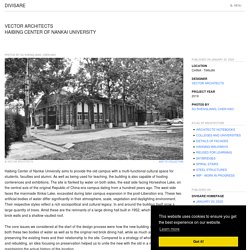 As well as being used for teaching, the building is also capable of hosting conferences and exhibitions. The site is flanked by water on both sides, the east side facing Horseshoe Lake, on the central axis of the original Republic of China-era campus dating from a hundred years ago. The west side faces the manmade Xinkai Lake, excavated during later campus expansion in the post-Liberation era.

These two artificial bodies of water differ significantly in their atmosphere, scale, vegetation and daylighting environment. Sans titre. The building is approached from the south through a dense spruce forest, as the lake landscape slowly opens to the right on the east side. 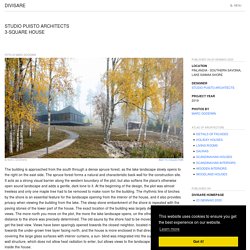 The spruce forest forms a natural and characteristic back wall for the construction site. It acts as a strong visual barrier along the western boundary of the plot, but also softens the place's otherwise open sound landscape and adds a gentle, dark tone to it. At the beginning of the design, the plot was almost treeless and only one maple tree had to be removed to make room for the building.

The rhythmic line of birches by the shore is an essential feature for the landscape opening from the interior of the house, and it also provides privacy when viewing the building from the lake. Sans titre. MAD's city-sized complex of mountain-like towers with cascading white louvres, called the Nanjing Zendai Himalayas Centre, is nearing completion in eastern China. 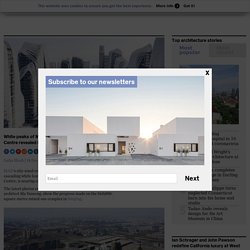 The latest photos released by the Beijing-based firm, led by architect Ma Yansong, show the progress made on the 560,000-square-metre mixed-use complex in Nanjing. Towering buildings with articulated white ridges soar above smaller scale buildings and connecting pathways and green spaces. MAD first unveiled the design with a large scale installation at the 2014 Venice Architecture Biennale. Designed to offer future residents a "village-like community", the Nanjing Zendai Himalayas Centre includes offices, hotels, shops and apartments arranged throughout the complex. Sans titre. Aged brick walls and ceiling beams hint at the past lives of this building in Barcelona, which Cadaval & Solà-Morales has turned into a contemporary home. 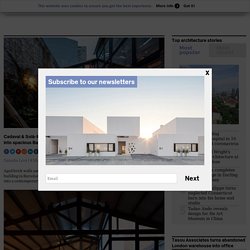 Named after its former life as a drama venue, The Theatre house has been overhauled by local studio Cadaval & Solà-Morales to feature lofty living and work spaces. The house is situated just a short walk away from Avinguda Diagonal – a major avenue that runs through the centre of Barcelona – and since its construction in the late 1800s has also served as a barn and toilet paper warehouse. Sans titre. A neglected barn made from plaster-coated river pebbles on the outskirts of Verona has been transformed into a new country home by Milan-based Studio Wok. 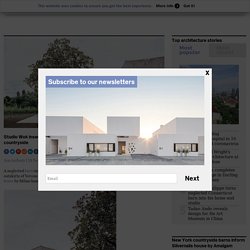 Part restoration and part modern insertion, Studio Wok described creating the county home in Chievo as a process of "subtraction" and "addition". One of the studio's first steps was to strip back the plaster from the walls to reveal the stones beneath, while internally much of the structure was removed. "The project's leitmotif is a spatial and material dialogue between history and modernity," said the architect. Sans titre. Portuguese practice António Costa Lima Arquitectos has inserted a perforated, lattice-like brick volume into the stone shell of a former warehouse to create this new home along Lisbon's waterfront. 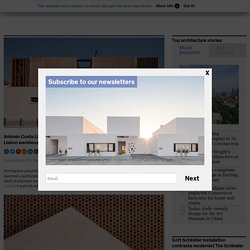 Called Casa Althino or "High House" on account of the street's elevated position, the three-storey home combines an austere, inward-facing lower level with bright and airy upper floors overlooking the Tagus river through a glazed gable-end. Drawing on the historic importance of warehouses to the area, the decision was made to maintain the existing structure and draw it into the new design, rather than replace it.

"The house is born of the confrontation of two archetypes – house versus warehouse – confronting shapes, scales and materials," said the practice. Sans titre. Argentinan studio Carolina Vago Arquitectura has added a metal and glass volume on top of old horse stables to create this rural holiday home. The Stables, or Las Caballerizas, is a remote property nestled into a mountainside in Salta in northwest Argentina. The project was formerly a ranch where the owner grew up. Carolina Vago Arquitectura was tasked by the client to turn the existing stables into a home for the owner's grandchildren to enjoy.

"Build a ranch where you can spend a weekend with all your children and grandchildren was the client's request," studio founder Carolina Vago said. "To recover this place where he had spent his childhood. " The local studio retained many of the original details, including the central courtyard, outdoor lamps, stable windows and drinking fountains of the horses. Sans titre. American designer and artist John-Paul Philippe has turned a weathered log cabin in Connecticut into his home and studio featuring striped wooden walls, eclectic ornaments and rustic finishes. Philippe previously lived in New York and purchased the remote property in Connecticut town Sharon in 2006 to serve as a weekend home. The property became his full-time residence nine years later. Sans titre. Trace Architecture Office has inserted a bookshop and cafe into old rammed earth gables of a long-abandoned house in rural China.

Called Paddy Field Bookstore after its location, the shop on the outskirts of Xiadi Village, Fuijian province, is all but invisible from the exterior. "The remnants serve as a container that wraps around the new construction, which is made of concrete and steel, forming a dialogue between the contemporary and the traditional," said the practice. "Most of the new construction is hidden inside the remnants of the old house, so it seems as though nothing happened from the outside.

Second Home's co-founder, Rohan Silva, hopes the unusual facade, which is made from fluorine-based plastic EFTE, will act as a landmark to young creatives in the local area. "Too many buildings have grey facades that deaden the landscape," he explained to Dezeen. "We tried to create an external environment that will have people wondering in saying 'what is this place? '". New images of peter zumthor's design for new LACMA building. Fresh images have been revealed of peter zumthor’s design for the new LACMA building in los angeles. the project, which was approved earlier in 2019, will be a museum housing LACMA’s permanent collection within a series of galleries. eight new renderings illustrate the scale of the scheme, which had been reduced in height compared to its previous version. it was confirmed that the project had been approved by local authorities on april 10, 2019, with construction documents now in the process of being formally drawn up.

Second home hollywood by selgascano opens in LA. Second home, the co-working business for entrepreneurs and innovators, has opened its first U.S. location in los angeles. Bathhouse spa with sensory deprivation tank opens in Williamsburg. A 1930s soda factory in Williamsburg, Brooklyn has been transformed into bathhouse with a subterranean spa influenced by Scandinavian saunas, Russian banyas and Turkish hammams. Founders Jason Goodman and Travis Talmadge collaborated with Manhattan firm Verona Carpenter Architects to reinvigorate the space to be a unique venue for social bathing called Bathhouse.