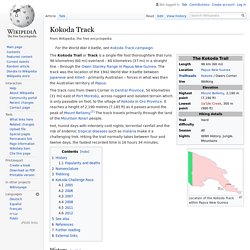 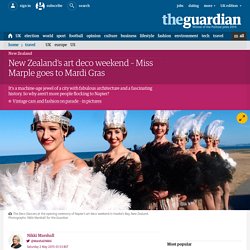 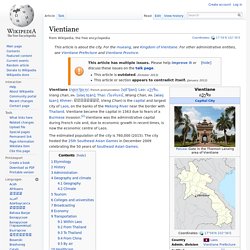 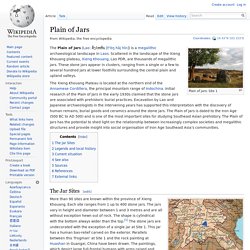 Scattered in the landscape of the Xieng Khouang plateau, Xieng Khouang, Lao PDR, are thousands of megalithic jars. These stone jars appear in clusters, ranging from a single or a few to several hundred jars at lower foothills surrounding the central plain and upland valleys. The Xieng Khouang Plateau is located at the northern end of the Annamese Cordillera, the principal mountain range of Indochina. Luang Prabang. Drinking with altitude: Melbourne's best rooftop bars. Forget the beach – one of the pleasures of summer is enjoying a drink at one of Melbourne’s rooftop bars while taking in views of the city skyline. 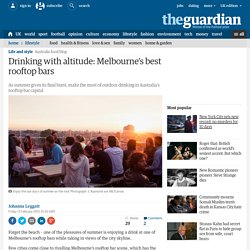 Few cities come close to rivalling Melbourne’s rooftop bar scene, which has the capacity to make you feel like you’re in Manhattan just by ascending a few flights of stairs. Sydney has seen a boom in small, intimate bars in the past few years after complex liquor licensing laws that favoured large operators were relaxed. Ecotourism. The Cedars in Lebanon Ecotourism is a form of tourism involving visiting fragile, pristine, and relatively undisturbed natural areas, intended as a low-impact and often small scale alternative to standard commercial (mass) tourism. 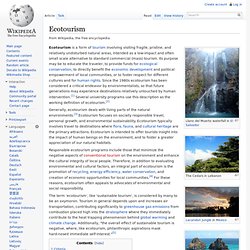 Its purpose may be to educate the traveler, to provide funds for ecological conservation, to directly benefit the economic development and political empowerment of local communities, or to foster respect for different cultures and for human rights. Since the 1980s ecotourism has been considered a critical endeavor by environmentalists, so that future generations may experience destinations relatively untouched by human intervention.[1] Several university programs use this description as the working definition of ecotourism.[2] Generally, ecotourism deals with living parts of the natural environments.[3] Ecotourism focuses on socially responsible travel, personal growth, and environmental sustainability.

Criteria[edit] [7][8] such as: History[edit] Morning glory gliding bourketown. Angel Falls. The falls are on the Gauja River (alternatively known as the Kerep River or Kerepacupai), which flows into the Churun River, a tributary of the Carrao River. 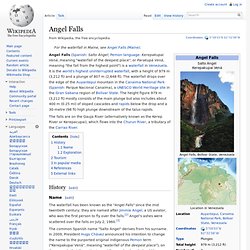 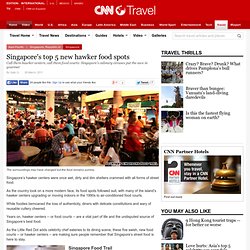 As the country took on a more modern face, its food spots followed suit, with many of the island’s hawker centers upgrading or moving indoors in the 1990s to air-conditioned food courts. While foodies bemoaned the loss of authenticity, diners with delicate constitutions and wary of reusable cutlery cheered. Years on, hawker centers -- or food courts -- are a vital part of life and the undisputed source of Singapore’s best food. 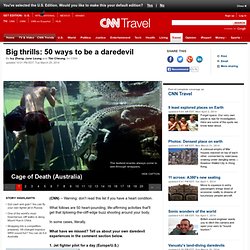 Always wear a helmet. That way no one can see you cry. Why climb when you can fly? What goes up must come down. You hope. 49 journeys you'll never forget. What makes a great journey? 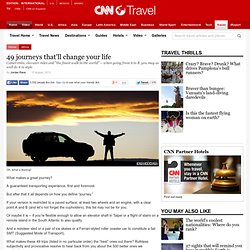 A guaranteed transporting experience, first and foremost. But after that it all depends on how you define “journey.” Best rooftop bars. Sir Elly's Terrace at The Peninsula Shanghai promises good drinks, light snacks and the sense that, for an evening at least, the whole city is looking up to you. Discovering five of Tokyo's lesser-known neighborhoods. Tokyo: by most measures the biggest city in the world. For every well-known shopping, sightseeing or nightlife district -- Shibuya, Roppongi, Asakusa -- there are scores of neighborhoods that boast their own vibe but are nonetheless missed by the guidebooks. We decided it was time to go off-course, pick five at random and simply go a-wandering. Jindai Motomachi, Chofu Old-time Tokyo without new-era tourism in Jindai.Recalling an old Edo village, Jindai Motomachi in western Tokyo is a relaxing day-trip devoid of bustling masses, or, you know, a place to pretend to be a samurai.

Captain's Choice - Captains Choice. Aurora Australis. Monkey Mia. Monkey Mia dolphin feeding Monkey Mia is a popular tourist destination located about 900 km north of Perth, Western Australia. Bungle Bungle Range. Palms in one of the many canyons. The Bungle Bungles Bungle Bungle Range is the landform that is the major component of the Purnululu National Park in Western Australia - it is often used as a synonym for the national park area. The traditional human inhabitants of the area are the Kitja peoples.[1] Kata Tjuta. Google Image Result for. Nitmiluk National Park.

It lies 335 km (208 mi) south west of the nearest large town, Alice Springs, 450 km (280 mi) by road. ParoTaktsang Palphug Buddhist monastery. Iguazu Falls. The name "Iguazu" comes from the Guarani or Tupi words "y" [ɨ], meaning "water", and "ûasú "[waˈsu], meaning "big".[2] Legend has it that a god planned to marry a beautiful woman named Naipí, who fled with her mortal lover Tarobá in a canoe. You can literally sit amongst the clouds at this Japanese resort. Hoshino Resorts Tomamu, in the Yūfutsu District of Japan, is a multi-complex family resort that is open all year round. It is popular for its expansive slopes and famous for its finely powdered snow. 1400183679967. Statues of Buddha at a workshop ahead of Vesak Day celebrations in Colombo, Sri Lanka. 1400183679967. The World's Dark Restaurants. Dining in the dark - Epicure - www.theage.com.au.