Vancouver BC Rental apartments Warning! Read this! Feb 2016. Sunshine Coast Communities on Pinterest. Things to do in vancouver - sorted alphabetically. EAT HERE: Vancouver BC. Things to do in Vancouver, Canada. Shameful Tiki Room - an album on Flickr. Museum of Anthropology at UBC. 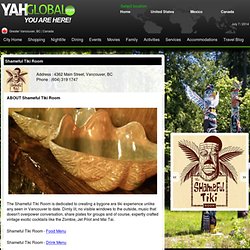 Shameful Tiki Room The Shameful Tiki Room recently opened its mysterious doors on the ever-renovating strip of Main Street Vancouver in March (2013). Even before its official opening it was being whispered by many in-the-know as being the savior of all things tiki north of the US border. Trader Vic's Vancouver had passed into the distant memories of old salty dogs that paid homage to Polynesian lore and decor when it closed nearly two decades ago. 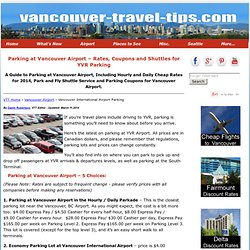 VTT Home › Vancouver Airport › Vancouver International Airport Parking By Darrin Robertson, VTT Editor - Updated: March 11,2014 If you’re travel plans include driving to YVR, parking is something you’ll need to know about before you arrive. Here’s the latest on parking at YVR Airport. All prices are in Canadian dollars, and please remember that regulations, parking lots and prices can change constantly. You'll also find info on where you can park to pick up and drop off passengers at YVR arrivals & departures levels, as well as parking at the South Terminal.

Parking at Vancouver Airport – 5 Choices: (Please Note: Rates are subject to frequent change - please verify prices with all companies before making any reservations) Weekend Extra: Downtown’s cool new store: a bookshop. Buildings are being revitalized by new businesses in fringe areas of Vancouver’s downtown core as higher rents in other parts of the inner city push out longtime residents and attract new ideas. 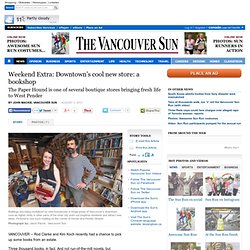 Pictured is one such building on the corner of Homer and Pender Streets. Photograph by: Jason Payne , Vancouver Sun VANCOUVER -- Rod Clarke and Kim Koch recently had a chance to pick up some books from an estate. Www.medinacafe.com. Eat. Drink. Watch. Metro Vancouver. Metro Vancouver is the name of a political body and corporate entity designated by provincial legislation as one of the regional districts in British Columbia, Canada.[4][5] The organization was formerly known as the Greater Vancouver Regional District (GVRD), and that name is still the official name and remains in common colloquial use, especially in the abbreviated form. 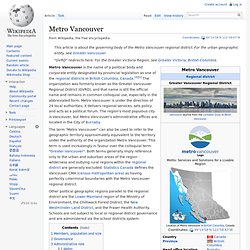 Metro Vancouver is under the direction of 24 local authorities; it delivers regional services, sets policy and acts as a political forum. The region's most populous city is Vancouver, but Metro Vancouver's administrative offices are located in the City of Burnaby. The term "Metro Vancouver" can also be used to refer to the geographic territory approximately equivalent to the territory under the authority of the organization Metro Vancouver. 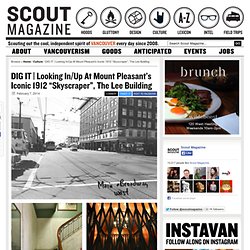 One hundred (and two) years on, it operates nearly just the same as ever, with an assortment of small businesses and residents occupying the 7-story building heralded as the first skyscraper in the city. Designed by English architect Arthur Julius Bird, the building features a prototypical brick and stone masonry design, a look that was fairly new on the West Coast when it was completed 1912. Bird is also remembered as a pioneering force in city zoning and planning, with a particular focus on residential construction on sloped areas – a convenient match for Mount Pleasant’s hilly landscape.

The Lee, which sits on land that once was home to a large church, is named for Herbert O. Scott Landon Antiques. Gastown Information. Canada's First Gas Station. VHF West Hastings Historic Walk. Old Gastown Meets New Technology - Vancouver Blog Miss604. The Gastown Business Improvement Association founded the Gastown Blog in the summer of 2009 to breathe some new life into this historic community. 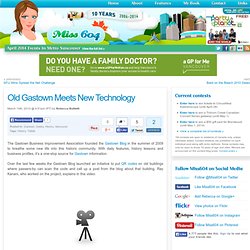 With daily features, history lessons and business profiles, it’s a one-stop source for Gastown information. Over the last few weeks the Gastown Blog launched an initiative to put QR codes on old buildings where passers-by can scan the code and call up a post from the blog about that building. Ray Kanani, who worked on the project, explains in this video: Your smartphone’s camera acts as a scanner while processing the symbol, which looks like a scrambled bar code. The QR code contains information that can be accessed with an iPhone or Blackberry application, instantly calling up a webpage with Vancouver Archive photos and historical facts about the building. You can find these QR code stickers on over 20 buildings in Gastown and they’re hoping to expand. SUNN Vancouver Historic Quartiers. Detail from 1910 map in: Vancouver: A Visual History (1992) by Bruce Macdonald. 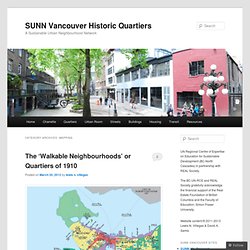 The plan shows the footprint of development in the City of Vancouver 25 years after the railway arrived, and just four years before the opening of the Panama Canal. The latter triggered a building boom in Vancouver in 1908 the full extent of which is represented here. The 1910 Macdonald map presents an enigmatic portrait of a city about to escape the orbit or limits placed by total reliance on walking and horses, and already embracing the possibilities for extension presented by electrified rail transportation. The values of the walkable urbanism are fully on view. Yet, as we compare this map to the growth of streetcar tracks below, it becomes clear that a new set of values is already expressed in the map. Japanese Restaurant. Untitled. Dirty Apron Deli Is On The Lookout For A Full-Time FOH Staffer. Browse > Home / Gluttony / OPPORTUNITY KNOCKS | Dirty Apron Deli Is On The Lookout For A Full-Time FOH Staffer The Dirty Apron Deli & Cooking School is located at 540 Beatty St. in Vancouver | 604-879-8588 | www.dirtyapron.com The GOODS from The Dirty Apron Vancouver, BC | The Dirty Apron Delicatessen is on the lookout for a new full time front of house Deli Sales Associate. 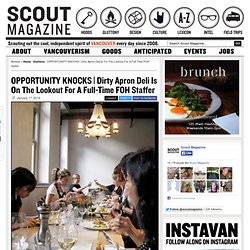 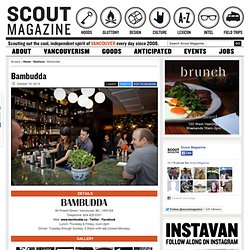 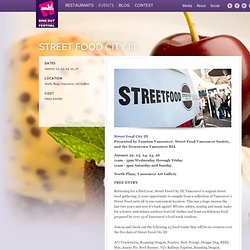 The Oakwood Canadian Bistro. The Oakwood Canadian Bistro is a fun and unpretentious neighbourhood room specializing in down-to-earth Canadian fare and casual service. The bistro welcomes with a chic Canadian log cabin feel, while the name pays homage to the reclaimed wood materials used in the space, as well as Kitsilano’s tree-themed street names. A staff of passionate industry professionals—from Owner Mike Shea, General Manager Jeff Parr and Executive Chef Mike Robbins—ensures a quality, welcoming experience. The concept for the Oakwood Canadian Bistro was drawn from classic French bistros, in which families invited the public into their homes to eat simply prepared, locally grown food in a warm, casual setting.

Striving to utilize local, Canadian ingredients whenever possible, Executive Chef Michael Robbins and his team are guided by a food philosophy focused on fresh, house-made dishes influenced by French techniques. Dine Out Vancouver 2014: how to choose the best restaurants and menus. For anyone who’s been wintering in Mexico for the past 11 years, Dine Out Vancouver takes place annually in January. Restaurants offer three-course dinner menus at one or more of three price points: $18, $28, and $38. Many restaurants offer set lunch options as well. A record 263 restaurants are participating in this year’s festival, which runs from January 17 to February 2. Most restaurants are now taking reservations, and prime slots fill up quickly. So how do you choose where to book?

Tracey Kusiewicz. 5 Waterfront Retaurants in Vancouver. Search restaurants and cafes in Vancouver. Floata Restaurant Group, with headquarter in Hong Kong, operates several restaurants in that city, China and Canada respectively. After the success of the first Floata Seafood Restaurant in Hong Kong, Floata Group stepped into the Canadian Market with the 380-seats Floata Seafood Restaurant in …more > Abigail's Party is a cozy wine bar serving comfort food of outstanding value, made with love from local meats, seafood & produce.