The Myth Of Razors And Razor Blades. The story of Gillette and the famous "razors and razor blades" business model is legendary at this point. 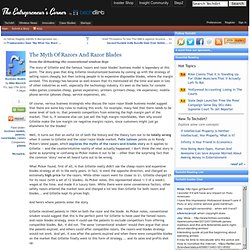 The story goes that King Gillette revolutionized business by coming up with the strategy of selling razors cheaply, but then locking people in to expensive disposable blades, where the margin existed. This strategy has become so well-known that it's mentioned all the time and seen in lots of other industries as well, especially the technology industry. It's seen as the basis for console video games (consoles cheap, games expensive), printers (printers cheap, ink expensive), mobile phone service (phones cheap, service expensive), etc. Of course, various business strategists who discuss the razor-razor blade business model suggest that there are some key rules to making this work: for example, many feel that there needs to be some level of lock-in, that prevents competitors from entering the high margin part of the market. And here's where patents enter the story.

Time Based Pricing for Internet Content « Nova Spivack – Minding the Planet. I am not advocating charging for content online, however, it may be a necessary evil for some content providers to survive. 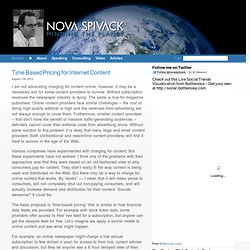 Various companies have experimented with charging for content. The basic proposal is “time-based pricing” that is similar to how financial data feeds are provided. Business ecology and the four customer currenci. Lately, I’ve been rethinking the concept of “business model” for startups, in favor of something I call “business ecology.” 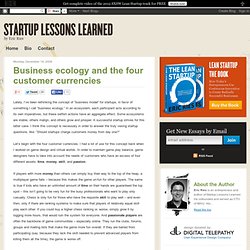 In an ecosystem, each participant acts according to its own imperatives, but these selfish actions have an aggregate effect. Some ecosystems are stable, others malign, and others grow and prosper. A successful startup strives for this latter case. I think this concept is necessary in order to answer the truly vexing startup questions, like: “Should startups charge customers money from day one?”

Let’s begin with the four customer currencies. If players with more money than others can simply buy their way to the top of the heap, a multiplayer game fails – because this makes the game un-fun for other players. Each of these four currencies represents a way for a customer to “pay” for services from a company. Here’s the ecosystem we built at IMVU, just to give one example.

Having a balanced ecosystem is what game designers strive for.

Virtual goods. Business Model. The Collapse of Complex Business Models. I gave a talk last year to a group of TV executives gathered for an annual conference. 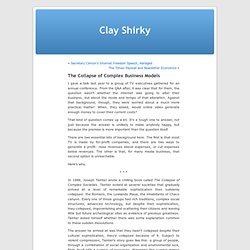 From the Q&A after, it was clear that for them, the question wasn’t whether the internet was going to alter their business, but about the mode and tempo of that alteration. Against that background, though, they were worried about a much more practical matter: When, they asked, would online video generate enough money to cover their current costs? That kind of question comes up a lot. It’s a tough one to answer, not just because the answer is unlikely to make anybody happy, but because the premise is more important than the question itself. There are two essential bits of background here. Here’s why. In 1988, Joseph Tainter wrote a chilling book called The Collapse of Complex Societies. The answer he arrived at was that they hadn’t collapsed despite their cultural sophistication, they’d collapsed because of it. The ‘and them some’ is what causes the trouble. Dr. Or it might not.