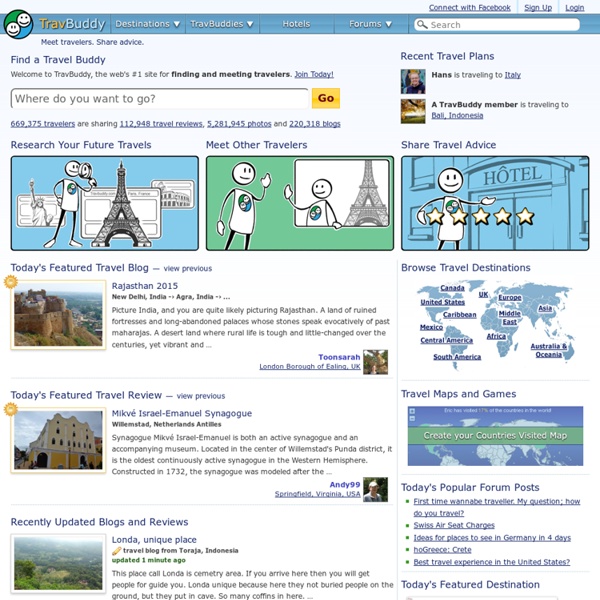 Blogging for Money - Make Money Blogging While Traveling and Travel Blogging for Money How to pay for travel is the eternal question for student travelers and backpackers. A job that travels with you, like blogging for money, is a solution whose time has come. Getting online to work is getting easier worldwide, even from the unbeaten paths (more on that below). The 20 Best Travel Websites on the Internet - Golden Book Traveler Update: Visit the 2012 version of The 20 Best Travel Websites on the Internet I hope that everyone who attended my SXSW Core Conversation panel on How to Make Money Traveling Around the World enjoyed the presentation. As promised, I have a listing of my top 20 favorite travel websites (in no particular order). I’m still working on my eBook “70 Vacations in 7 Months“. The project has consumed most of my time of late. If you attended the presentation with myself and Tynan, shoot me over an email (if you haven’t already) and I’ll make sure you receive a free copy upon completion

Visit Belgium Brussels Weekend How to spend 3 days in Brussels Brussels has enough to keep anyone fascinated, entertained and well-fed. What follows are suggestions for what one might do on a weekend covering a whole range of activities. Select according to your taste and energy level. Before you go: Thomson Discount Code: £100 Off - Voucher Codes for 2017 Looking for a holiday with a difference but that won't burn a hole in your pocket? You're on the right track by booking online with Thomson Holidays! Visit the Caribbean by cruise or fly to the States and unveil Florida; with Thomson there are plenty of ways to delve deeper into the world and ensure that you always get the best price for exactly what you want. From all inclusive promo offers to limited time sale discounts - you'll be sure to find a holiday that'll give you everything you wish for and more. Last Minute Holidays with Thomson Feeling the holiday itch?

Free Travel Blog - Blog your Trip Home Start your Free Travel Blog Start your blog! It's free “Travellerspoint, the new kid on the block, is the iPhone [of travel blogs]” “A great place to build your own online trip diary” The World’s Most Underrated Destinations How popular a country is as a travel destination has as much to do with image as it has to do with how interesting a place is to visit or how accessible or affordable it is. Some simply want to go somewhere because it looks nice, while others are drawn to specific locations – whether it’s Tuscany, India, or Mauritius – as the image presented by these destinations fits their own personal aspirations. While popular tourist magnets, such as Australia or New Zealand, excel at self promotion, other equally deserving destinations fare less well in the image stakes; they may be a little of the beaten track, have suffered from poor leadership, or simply have failed to sufficiently promote their own attractions. Nevertheless, some of these less appreciated destinations have far more to offer curious independent travelers than their more adeptly promoted rivals. Planning a trip around these destinations

Russian millionaire details plans to re-establish Romanov empire on remote Pacific island A Russian millionaire is in advanced talks with the Kiribati government to lease three uninhabited islands and establish an alternative Russia and revive the monarchy. Russian Anton Bakov and his wife Maria are planning to re-establish the Romanov Empire on three remote islands in the south Pacific nation of Kiribati, and invest hundreds of millions of dollars into the impoverished island’s economy. The Russian monarchy was overthrown by the Bolshevik revolution in 1917 and Bakov, a businessman and former Russian MP, has devoted himself to reviving it – which over the years has included exploring options for a base in Montenegro and the Cook Islands. Bakov has now proposed leasing the uninhabited islands of Malden, Starbuck and Millennium to use as a base for his “alternative Russia”, as well as building infrastructure for tourists and businesses. Bakov’s son Mikhail first approached the Kiribati government in late 2015 with his father’s investment plan.

How to travel the world for free (seriously) You can travel the world for less money than you spend each month to fill up your gas tank. WORLD TRAVEL is cheap and easy. In fact, with a little practice and effort, you can travel for free. The idea that travel is expensive and difficult is bullshit peddled by tour companies, hotel chains, and corporate media. The tourism industry wants you to buy cruise packages and stay at all-inclusive resorts. They want you to choose a world travel experience the same way you would choose a new jacket at the mall.

Best Travel Sites to Save You Money Feeling too pinched by the ever-troubled economy to travel? You can still find good deals to get away -- if you know where to go online first. Here are the best travel sites we've found to help you bag the best bargains on airfares, lodging, car rentals and all your other travel needs. 'It's heartbreaking': Maltese mourn collapse of Azure Window arch As arches go, the Azure Window had celebrity status, featuring in films such as Clash of the Titans and The Count of Monte Cristo and serving as the backdrop to the Dothraki wedding scene in the television version of Game of Thrones. But now, the limestone arch, one of Malta’s most famous landmarks, is no more, having collapsed into the sea after a heavy storm. Jonnie Atha (@Jonathan_Atha)Gutted that the "Azure Window" on Gozo in Malta has collapsed in a storm. So glad to have seen it in September '16 #malta #AzureWindow pic.twitter.com/t0ExmtL74fMarch 8, 2017

How to Travel Full-Time for $17,000 a Year (or Less!) Wise Bread Picks For the last five years, I've been traveling the world full-time, and for less money than I've ever spent (and I'd wager less money than most people would spend) to live in one place. My worldly possessions fit into one bag (just larger than carry-on size) and a backpack containing my laptop and computer gear. These are the world’s most visited cities Which is the world’s most popular city to visit? According to Euromonitor’s latest global rankings, Hong Kong reigns supreme. Even with a slight drop in the number of international visitors it attracts, the Asian city is hard to beat.

Adventure or Overland Tour Leaders Nothing beats a free lunch - except perhaps 180 free lunches. Throw in a sunset, an enchanting location and someone else to do the washing up and you would be right to feel that you are indeed a lucky so and so. Even better is that this can all come guilt free: there will be more than enough moments where you are in the thick of the action, taking charge and doing all the hard stuff while everyone else sleeps or relaxes.