ENTHYMÈME : Etymologie de ENTHYMÈME. Enthymeme - definition, etymology and usage, examples and related words. Webster's Revised Unabridged Dictionary n Enthymeme (Logic) An argument consisting of only two propositions, an antecedent and consequent deduced from it; a syllogism with one premise omitted; as, We are dependent; therefore we should be humble. 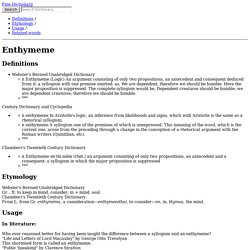 Here the major proposition is suppressed. The complete syllogism would be, Dependent creatures should be humble; we are dependent creatures; therefore we should be humble. *** Century Dictionary and Cyclopedia n enthymeme In Aristotle's logic, an inference from likelihoods and signs, which with Aristotle is the same as a rhetorical syllogism. n enthymeme A syllogism one of the premises of which is unexpressed. 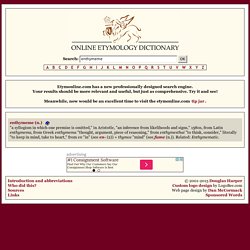 Your results should be more relevant and useful, but just as comprehensive. Try it and see! Meanwhile, now would be an excellent time to visit the etymonline.com . enthymeme (n.) "a syllogism in which one premise is omitted," in Aristotle, "an inference from likelihoods and signs," 1580s, from Latin enthymema, from Greek enthymema "thought, argument, piece of reasoning," from enthymesthai "to think, consider," literally "to keep in mind, take to heart," from en "in" (see en- (2)) + thymos "mind" (see fume (n.)). 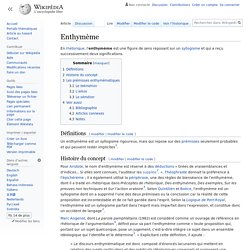 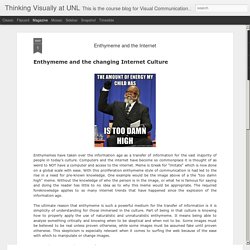 Computers and the internet have become so commonplace it is thought of as weird to NOT have a computer and access to the internet. Meme is Greek for "imitate" which is now done on a global scale with ease. With this proliferation enthymeme style of communication is had led to the rise in a need for pre-known knowledge. One example would be the image above of a the "too damn high" meme. Without the knowledge of who the person is in the image, or what he is famous for saying and doing the reader has little to no idea as to why this meme would be appropriate. The ultimate reason that enthymeme is such a powerful medium for the transfer of information is it is simplicity of understanding for those immersed in the culture. This image in particular caused a lot of stir on the internet because of how manipulated it looks upon first glance.

Meme, Enthymeme, and Communications Professors : etymology. Meme. Thought or idea that can be shared, in analogy to a gene A meme (/miːm/ MEEM[1][2][3]) is an idea, behavior, or style that spreads from person to person within a culture—often with the aim of conveying a particular phenomenon, theme, or meaning represented by the meme.[4] A meme acts as a unit for carrying cultural ideas, symbols, or practices, that can be transmitted from one mind to another through writing, speech, gestures, rituals, or other imitable phenomena with a mimicked theme. 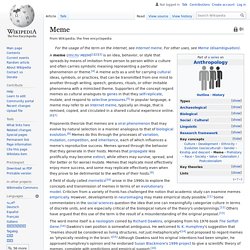 Supporters of the concept regard memes as cultural analogues to genes in that they self-replicate, mutate, and respond to selective pressures.[5] Proponents theorize that memes are a viral phenomenon that may evolve by natural selection in a manner analogous to that of biological evolution. Memes do this through the processes of variation, mutation, competition, and inheritance, each of which influences a meme's reproductive success. Memes spread through the behavior that they generate in their hosts.