Places to Visit in Italy. Ask an Italian where in the world they would most like to live, and the odds are that they will say “right here”. 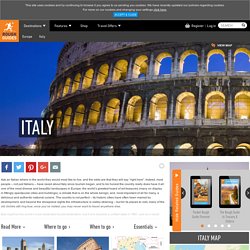 Indeed, most people – not just Italians – have raved about Italy since tourism began, and to be honest the country really does have it all: one of the most diverse and beautiful landscapes in Europe; the world’s greatest hoard of art treasures (many on display in fittingly spectacular cities and buildings); a climate that is on the whole benign; and, most important of all for many, a delicious and authentic national cuisine.

The country is not perfect – its historic cities have often been marred by development, and beyond the showpiece sights the infrastructure is visibly straining – but for its places to visit, many of the old clichés still ring true; once you’ve visited, you may never want to travel anywhere else. Italy Tourist Attractions. Italy can feel like one big tourist attraction, and to many people it probably is. 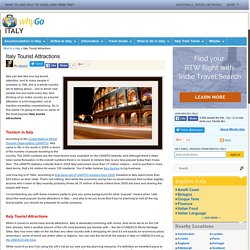 Still, this is a whole country we’re talking about – one in which real people live and work every day. And thinking of an entire country as a tourist attraction is a bit misguided, not to mention incredibly overwhelming. So in this article I’m going to focus on some of the most popular Italy tourist attractions. Tourism in Italy According to the United Nations World Tourism Organization (UNWTO), Italy came in 5th in the world in 2005 in terms of the number of people traveling to the country. Just how big is it? I’m bombarding you with these numbers partly to give you some background for what “popular” means when I talk about the most popular tourist attractions in Italy – and also to let you know that if you’re planning to visit all the big tourist sights, you should be prepared for some company.

10 Top Tourist Attractions in Italy. Italy is home to the greatest number of UNESCO World Heritage Sites in the world. 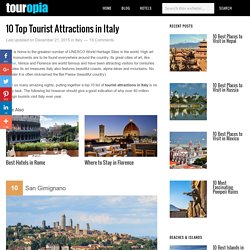 High art and monuments are to be found everywhere around the country. Its great cities of art, like Rome, Venice and Florence are world famous and have been attracting visitors for centuries. Besides its art treasures Italy also features beautiful coasts, alpine lakes and mountains. No wonder it is often nicknamed the Bel Paese (beautiful country). With so many amazing sights, putting together a top 10 list of tourist attractions in Italy is no easy task. 10San Gimignano Nicknamed the medieval Manhatten, San Gimignano is a village in Tuscany famous for its 14 stone towers. See also: Where to Stay in San Gimignano 9Manarola (Cinque Terre)

20 Things Everyone Should Do in Italy. By Jessica | October 20th, 2008 When it comes to travel, I’m not one of those people who says stuff like, “You can’t visit Italy without seeing [fill in the blank].” 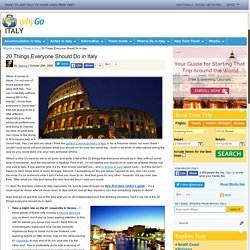 I know that everyone’s “must-see” lists are going to be a little different depending on their personal preferences, and trying to impose my idea of what they can’t miss is like trying to fit a square peg in a round hole. Yes, I’ve told you what I think the perfect 2 week itinerary in Italy is for a first-time visitor, but even there I couldn’t just come out and declare what you should do for your two-week trip. I built in all kinds of alternatives along the way so you could tailor it to your own personal whims. Which is why it’s hard for me to sit down and write a list of the 20 things that everyone should do in Italy without some kind of disclaimer.

Now that we’ve got that out of the way and you’re all independent and free-thinking travelers, here’s my list of the 20 things everyone should do in Italy! 12 Top-Rated Tourist Attractions in Italy. 1 Colosseum For travelers making their way through Italy, the Colosseum is a must see. 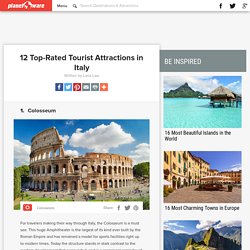 This huge Amphitheater is the largest of its kind ever built by the Roman Empire and has remained a model for sports facilities right up to modern times. Today the structure stands in stark contrast to the modern development that surrounds it, and is a prominent reminder of ancient times and the extensive history of Rome. 2 Venice Canals A gondola ride through the canals of Venice is a tradition that travelers have been participating in for centuries. 3 Pompeii Below the rumbling volcano of Mt Vesuvius stand the ruins of Pompeii, an ancient Roman city preserved in time by the eruption in A.D. 79. 4 Leaning Tower of Pisa The Leaning Tower of Pisa is actually just one of many attractions in the city of Pisa, but its fame, gained from its flaw, is world renown. 5 Lake Como Lake Como is one of Italy's most scenic areas, surrounded by mountains and lined by small picturesque towns. 6 Amalfi Coast 8 Cinque Terre.