100+ Ways to Learn Anything on the Internet 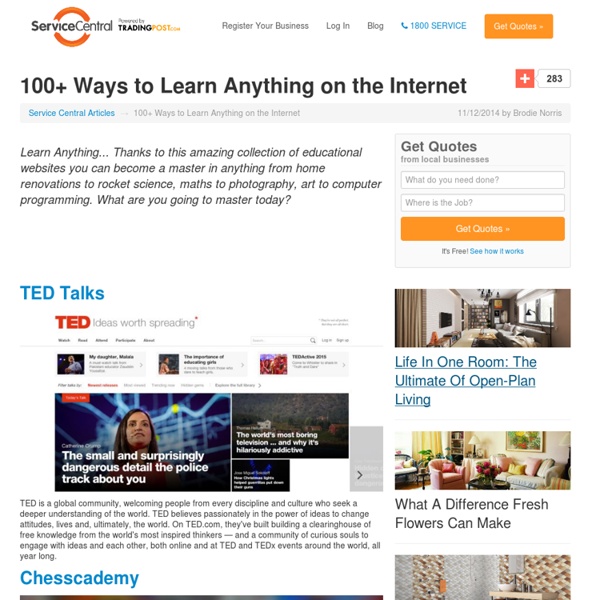 Learn Anything... Thanks to this amazing collection of educational websites you can become a master in anything from home renovations to rocket science, maths to photography, art to computer programming. What are you going to master today? TED Talks TED is a global community, welcoming people from every discipline and culture who seek a deeper understanding of the world. TED believes passionately in the power of ideas to change attitudes, lives and, ultimately, the world. Chesscademy Chesscademy offers free online lessons for people around the world who want to learn how to play chess or improve their existing game. Microsoft DreamSpark Programs DreamSpark is a Microsoft Program that supports technical education by providing access to Microsoft software for learning, teaching and research purposes. How Stuff Works HowStuffWorks got its start in 1998 at a college professor's kitchen table. Fora.tv Fora TV records some of the worlds best conferences, speeches and events. MusicTheory.net Busuu

Related:  LIFE HACKS • fergie213 • everything else • lighten up • Learn stuff

‘Snowden broke the mold and freed up whistleblowers like Binney’ — RT Op-Edge Published time: January 22, 2015 17:32 Bill Binney (Still from RT America video) The example of Edward Snowden showed that the US is not always successful in apprehending and jailing whistleblowers, who can comment freely on the secret agencies abuses, Ray McGovern, former CIA officer, told RT. The Sam Adams Associates for Integrity in Intelligence Award 2015 is taking place in Berlin on January 22. This year the award goes to William “Bill” Binney, retired NSA Technical Director, who revealed the extent of the US surveillance programs. RT: Why do we need this annual award?

18 Best Movies On Netflix You Haven't Yet Seen As great as Netflix is, finding good movies you haven't yet seen can be a chore. You may have even started believing that you've already seen them all. Rest assured, there is very little chance you have. A Good Movie to Watch suggests movies you haven’t seen, but you should. To do this, we only recommend movies that have received at least a 7 rating on IMDb and a 70% Fresh score on Rotten Tomatoes. This means that these movies have been appreciated by both critics and viewers, so you can trust that they’re awesome. Best of 2014: Top Tips, Insights, & Tricks In 2014, we learned how to battle burnout, stretch (both literally and figuratively), and use The Force for the creative good. Every week we invited the smartest people we know to share their insights from the creative and entrepreneurial process. After nearly an entire year, we gathered up the most popular ideas from 2014 to get you supercharged for the year ahead. 1. 7 Habits of Incredibly Happy People In our day-to-day lives it is easy to miss the forest for the trees and look over some of the smaller, simpler things that can disproportionally affect our happiness levels.

25 Psychological Life Hacks Social situations are among the most important in our lives. Yet, there is a huge chance that you are oblivious to the plethora of unwritten social rules that structure everybody’s behaviour. Failing to comply to these cultural imprints can cause irreversible damage. Anonymous takes down hundreds of ISIS social media accounts February 10th, 2015 at 9:07 am - AuthorJon Martindale The hacktivist movement Anonymous has made good on its promises to target those associated with the violent extremist organisation, ISIS, by taking over and knocking out hundreds of websites and social media accounts that help promote the organisation and encourage recruitment from new members. Apparently though, this is just the start, with the Anons stating in a video that #OpISIS would continue. It also championed the notion of solidarity in the face of the middle-east terrorist organisation’s brutality. “We are Muslims, Christians, Jews. We are hackers, crackers, hacktivists, phishers, agents, spies, or just the guy next door.

The biggest Internet Database about Cost of Living, Housing Indicators and many other informations about cities and countries! Numbeo is the world’s largest database of user contributed data about cities and countries worldwide. Numbeo provides current and timely information on world living conditions including cost of living, housing indicators, health care, traffic, crime and pollution. Numbeo is a collection of Web pages containing numerical and other itemizable data about cities and countries, designed to enable anyone to contribute or modify content. 20 Items That Are Borderline Genius - Part 2 Here at Awesome Inventions we come across so many genius and cool products or ideas that we think you'll simply love. You could be enjoying your lunch while on-the-go with the car swivel tray! Or how about a relaxing shower with an awesome color-changing LED shower head?! Amazing!Some of these great products you will see below are available to buy right here on Awesome Inventions.