How Can I Be More Convincing and Get Anything I Want? 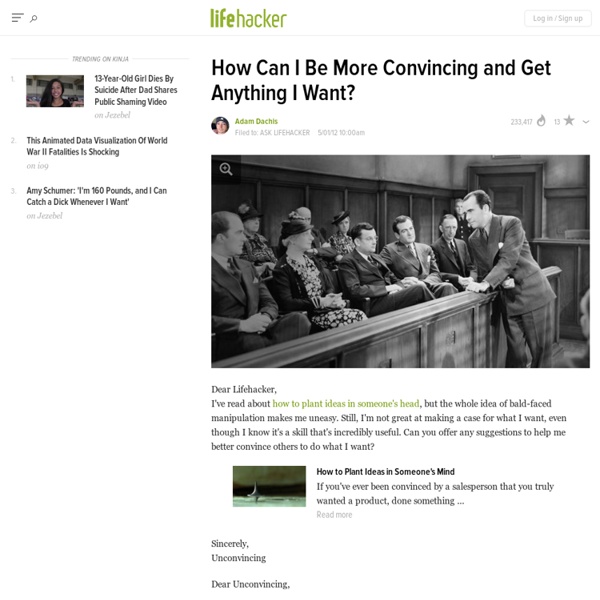 SExpand Dear Lifehacker, I've read about how to plant ideas in someone's head, but the whole idea of bald-faced manipulation makes me uneasy. Still, I'm not great at making a case for what I want, even though I know it's a skill that's incredibly useful. Can you offer any suggestions to help me better convince others to do what I want? P Sincerely, UnconvincingP

How to Detect Lies - body language, reactions, speech patterns Interesting Info -> Lying Index -> How to Detect Lies Become a Human Lie Detector (Part 1) Warning: sometimes ignorance is bliss. After gaining this knowledge, you may be hurt when it is obvious that someone is lying to you. The following deception detection techniques are used by police, forensic psychologists, security experts and other investigators. Introduction to Detecting Lies: 15 Things Highly Confident People Don't Do Highly confident people believe in their ability to achieve. If you don’t believe in yourself, why should anyone else put their faith in you? To walk with swagger and improve your self-confidence, watch out for these fifteen things highly confident people don’t do.

Snark SExpand I'm pretty sure no one in their right mind would tell George Carlin to "Just be nice". There are also obvious merits to being a snark, like the ability to speak what's really on your mind. Not just smile, act dumb, and play along. 10 Ways to Instantly Build Self Confidence Self confidence is the difference between feeling unstoppable and feeling scared out of your wits. Your perception of yourself has an enormous impact on how others perceive you. Perception is reality — the more self confidence you have, the more likely it is you’ll succeed. 8 Important Reasons To Let Go Of People Who No Longer Play An Important Part In Your Life There comes a point in every person's life when he or she parts ways with someone: ex, friend and anyone in between. Upon first meeting this person, there's a sweet beginning, but once you come to really know each other and grow comfortable, you suddenly realize that the relationship no longer brings any particular value to your life and is perhaps, even detrimental. Sometimes, we hold on to people purely based on how long we have known them. Time can tie people together, but if you feel as though there's nothing substantial keeping you connected, time is not a strong enough reason to hold on to something that's simply no longer worth holding onto.

Law of Attraction – Take Control of Your Life Warning: This article will sound like complete bullshit to the conservative mind. If you can go into the reading with an open mind and are willing to try the methods described with the intention of attracting good things to your life, please proceed. However, if you are already swaying towards skepticism, please save this article for a time when you are dying for a change or confident that this method could work for you. This might be the most important and eye-opening article you will read in your entire life so plan accordingly. Thank you Introduction to The Law Of Attraction: Many of you have probably heard of the Law of Attraction, The Secret, visualization, or some of the other popular manifestations of this technique, but most likely do not fully know what it is.

The 50th Law Origins[edit] The 50th Law grew out of the friendship and mutual admiration between 50 Cent and Robert Greene.[7] Greene's book The 48 Laws of Power, which has long been a staple in the hip hop world, came to the attention of 50 Cent, who asked his manager to arrange a meeting. Greene said that he was surprised by 50 Cent's persona and was impressed by his "Zen-like calmness" and eye for strategy.[8] The two began to work on a book project that would combine their two worlds.[8][9] According to Greene, 50 Cent is an example of what Machiavelli called a New Prince, a leader who emerges in a time of chaos or turmoil and rewrites the rules.[8] According to 50 Cent, Greene's books describe the laws and strategies used by hustlers on the street, even if they might not know the "technical terms" for what they were doing.[10] Synopsis[edit]

7 Social Hacks For Manipulating People 1. Whenever someone is angry and confrontational, stand next to them instead of in front of them. You won’t appear as so much of a threat, and they eventually calm down. 2. Open with “I need your help.” 50 Life Secrets and Tips Memorize something everyday.Not only will this leave your brain sharp and your memory functioning, you will also have a huge library of quotes to bust out at any moment. Poetry, sayings and philosophies are your best options.Constantly try to reduce your attachment to possessions.Those who are heavy-set with material desires will have a lot of trouble when their things are taken away from them or lost. Possessions do end up owning you, not the other way around. Become a person of minimal needs and you will be much more content.Develop an endless curiosity about this world.Become an explorer and view the world as your jungle.

The 33 Strategies of War Reception In the book Greene reveals that "Afghanistan was rich in natural gas and other minerals and had ports on the Indian Ocean".[14] The political tales in the book are said to be "mostly foolish or just plain wrong".[15] The book has "far too many duff sentences",[5] for example: "Your goal is to blend philosophy and war, wisdom and battle, into an unbeatable blend."[5][16]