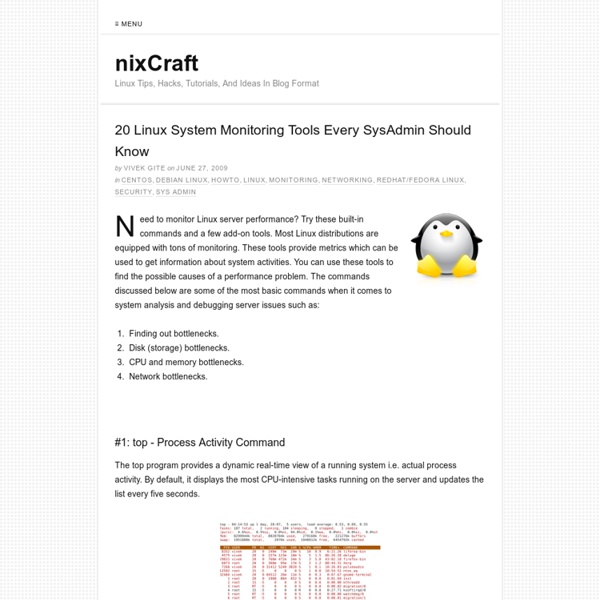 Need to monitor Linux server performance? Try these built-in commands and a few add-on tools. Most Linux distributions are equipped with tons of monitoring. These tools provide metrics which can be used to get information about system activities. You can use these tools to find the possible causes of a performance problem. The commands discussed below are some of the most basic commands when it comes to system analysis and debugging server issues such as: Finding out bottlenecks.Disk (storage) bottlenecks.CPU and memory bottlenecks.Network bottlenecks. #1: top - Process Activity Command The top program provides a dynamic real-time view of a running system i.e. actual process activity. Fig.01: Linux top command Commonly Used Hot Keys The top command provides several useful hot keys: => Related: How do I Find Out Linux CPU Utilization? #2: vmstat - System Activity, Hardware and System Information Display Memory Utilization Slabinfo # vmstat -m Get Information About Active / Inactive Memory Pages

Use your laptop as a wifi router Last week, I was snowboarding with my family in Scheffau, Austria. In the appartment, there was one single cat-5 cable, while 5 of us wanted to use the internet. So I figured out how to build a ad-hoc wifi network with my laptop in order to share the network connection. My configuration On my laptop, I'm running Fedora 13 with dnsmasq installed. All other software is pretty standard. Top 20 Nginx WebServer Best Security Practices Nginx is a lightweight, high performance web server/reverse proxy and e-mail (IMAP/POP3) proxy. It runs on UNIX, GNU/Linux, BSD variants, Mac OS X, Solaris, and Microsoft Windows. According to Netcraft, 6% of all domains on the Internet use nginx webserver. Nginx is one of a handful of servers written to address the C10K problem. Unlike traditional servers, Nginx doesn't rely on threads to handle requests.

redsocks - transparent socks redirector This tool allows you to redirect any TCP connection to SOCKS or HTTPS proxy using your firewall, so redirection is system-wide. Why is that useful? I can suggest following reasons: you use tor and don't want any TCP connection to leak you use DVB ISP and this ISP provides internet connectivity with some special daemon that may be also called "Internet accelerator" and this accelerator acts as proxy.

Encrypt DNS Traffic In Linux With DNSCrypt (Via OpenDNS) DNSCrypt, as its name suggests, encrypts DNS traffic between your computer and OpenDNS, in the same way SSL turns HTTP traffic into HTTPS encrypted traffic. Initially, DNSCrypt was announced as being available for Mac only for now, but according to an OpenDNS article posted yesterday, the source code for DNSCrypt was published on GitHub when they've released the Mac preview and even though there's no user interface yet, Linux users can already install DNSCrypt. Why use DNSCrypt? DNSCrypt encrypts all DNS traffic between your computer and the OpenDNS servers (so you'll be using OpenDNS) and can protect you from man-in-the-middle attacks, spying, resolver impersonation, can prevent Internet service providers from blocking various websites and more.

Adding iSCSI storage to KVM I’m really surprised that I’m the one writing this as there we no flat out simple guides available, maybe it’s just because I’m new to the whole iSCSI thing. Awhile back when I first was testing multiple storage types with KVM, I never got my head around iSCSI when I had an OpenFiler VM up. It’s actually quite simple. From the Virtual Manager window, go ahead and click Edit and Host Details, once there go to the Storage tab. Patching in ABS There have been quite a few questions about creating and/or applying patches to packages when using ABS. This document outlines the steps and options required to do these tasks. also has some useful information on patching files. Creating patches If you are attempting to use a patch that you got from elsewhere (ie: you downloaded a patch to the Linux kernel), you can skip to the next section. However, if you need to edit source code, make files, configuration files, etc, you will need to be able to create a patch.