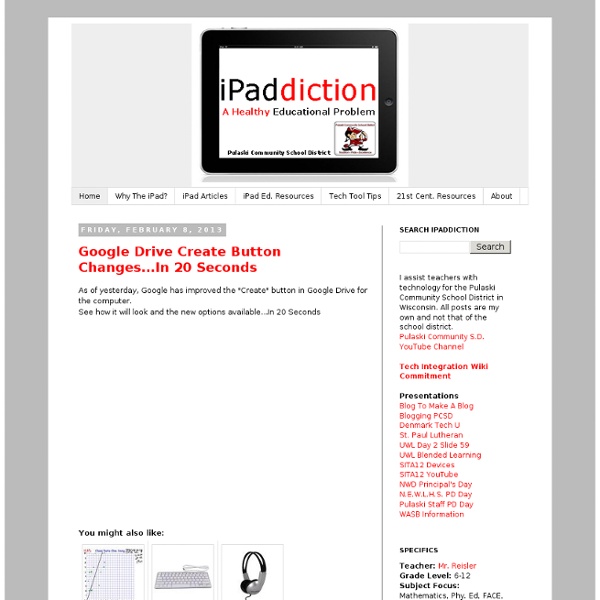 14 Must-Know iPad Tips & Tricks Whether you’re new to the iPad or a longtime user, here are some great tips to help you get the most out of the device. A few of these are intended for using on the new iPad, but most of them will be relevant to all iPad models of all ages. Switch the Mute Button to Orientation Lock Tap on Settings > General > Use Side Switch to: Lock Orientation. The side switch defaults to mute, but with volume buttons right underneath it this makes no sense, and there’s nothing more annoying than an iPad screen that’s constantly rotating if you’re reading in bed. Double-Tap Home Button to Access Brightness The iPad screen is extraordinarily bright, this is wonderful for daytime use but give your eyes some rest in dimmer environments and at night time by manually adjusting the brightness, just double-tap the Home button and swipe right until you see the brightness indicator, and adjust manually as the lighting fits. Use the Split Keyboard Use Speech Dictation Remember the Multitasking Gestures Use iCloud

Creating Books on the iPad Book Creator for iPad: $7.49The simple way to create your own beautiful iBooks, right on the iPad. Read them in iBooks, send them to your friends, or submit them to the iBookstore. Ideal for children’s picture books, photo books, art books, cook books, manuals, textbooks, and the list goes on. eBook Creator: $4.49 ‘eBook Creator’ is a simple and easy ebook creation application. It's interface is designed for all ages and skill levels so that young kids are able to make ebooks using the app. Ebook Magic: $4.49 An easy way to make custom epub books. Demibooks: FREEDemibooks Composer is the first iPad-based authoring software for creating interactive books. StoryPatch: $2.99 Now you can help your child's creativity grow with Story Patch, a beautiful new application for the iPad that children can use to create their own picture books.

39 Sites For Using iPads in the Classroom Pages - Menu This Blog Linked From Here Sites to Follow Friday, October 7, 2011 39 Sites For Using iPads in the Classroom How Much Did Steve Jobs Change the World? 5 Great iPad Apps For Early Childhood Teachers10 iPad Apps Everyone Should Have- from PC Magazine10 Must Have iPad Apps for Students and Teachers10 Ways to Use iPads in Your Classroom40 iPad Apps Librarians Love40 Most Awesome iPad Apps for Science Students50+ iPad Apps By a Geography Teacher62 Interesting Ways to Use an iPad in the Classroom100 Incredibly Useful and Free iPad AppsBest Academic Reference Apps for the iPad- some $$, some freeA Day in the Life of the iPad ClassroomThe Debate Over iPads in EducationDigital Storytelling with the iPad Posted by Julie Greller at 7:24 AM Labels: ipads, ipads in the classroom, using ipads in the classroom Newer PostOlder PostHome

Old NYC payphones transformed into free Wi-Fi hotspots | Internet & Media Just when the whole world laughs at those dinosaurian payphones -- marveling at how antiquated we used to be -- New York City has put them to a new innovative use. The city announced today that it was starting a pilot program transforming those metal relics of yesteryear into free unlimited Wi-Fi kiosks. Initially, 10 locations in Manhattan, Brooklyn, and Queens will get the service, and more hotspots will be added in coming months. Abandoned payphones have been a point of contention for many of the city's residents for a while now. According to GigaOm, the select payphones will provide Wi-Fi service from 300 feet away by using "military grade" antennas. Free Wi-Fi service seems to be fast-tracked in New York City.

Blooms and iPad Applications I just got tweeted a nice diagram showing iPad applications against different levels of Bloom’s revised taxonomy. Its a good and well considered diagram and I like it. Some applications there that I haven’t seen yet and I will have to look up. The only thing I would say is that the applications are just the medium in which the student demonstrates the level. I know a number of people who have questioned whether tools like animoto should be included because it can be so easy, but the reality is yes you can “throw” music and images at Animoto and get a good product. Tools like Pages and Touch Draw can be used across the taxonomic levels depending on the task and purpose. Nice work and thanks for sharing This Google+ Hangout Changed My Views On Communication Forever Last week, I had the great honor to speak with three very awesome people in a Google+ Hangout: Christian Vogler, director of the Technology Access Program at Gallaudet, Andrew Phillips, policy counsel at the NAD and Willie King, the director of product management at ZVRS. These three folks have one thing in common – they are deaf. I can’t understand sign language, and I speak way too fast for anyone to be able to read my lips. Without this technology, I would have never gotten to talk to Christian, Andrew and Willie. That’s right, I was the minority. The app that you see above allowed me to speak freely, while Laura typed my words in at an astonishing 200 words per minute. Christian Vogler told me right away that “for deaf and hard of hearing people, video conferences are a nightmare.” When reading a conversation that is happening over a phone, Andrew Phillips told me that “Context is a big problem. A lot of people benefit from accessibility, not just just deaf and hard of hearing.

iPads in Education - Apple's Configurator Overview A week ago I spent 5 hours at one of our local schools playing with Apple's new tool for managing iPads - Apple Configurator. I have to say that it was time well spent - I can see this being a viable tool for school districts struggling with managing large numbers of iOS devices. Some of the pros & cons (as some people might see them) to using this: Some tidbits I'll share that hopefully will save others headache I experienced: An iOS device can only be displayed in one of the Apple programs at a time; if it isn't displaying here, make sure you have iTunes & the iPhone Configuration Tool shut down.To use the Supervise mode, you have to setup up AND mark your "template" device as supervised from the beginning.

50 really useful iPad 2 tips and tricks An absolute gem of an article by John Brandon and Graham Barlow from MacLife on 30th March over at TechRadar. This is going to become my iPad manual from here on in. Customised iPads for all iPad 2 tips and original iPad tips - get 'em here! iPad 2 review It's also fully capable of running the latest version of Apple's iOS operating system and great apps like iMovie and GarageBand. 1. iOS now supports folders. 2. Double-clicking the Home button shows you all the apps that are running on your iPad in a bar along the bottom of the screen. 3. The internet got mightily upset when Orientation Lock was replaced with Mute on the iPad during the last iOS update. 4. If you're carrying around sensitive data, you can now enable a feature that'll erase all the data on the device if someone inputs the incorrect passcode 10 times. 5. First, turn on Home Sharing in iTunes (Advanced menu) and on your iPad (Settings > iPod and enter your Apple ID). 6. Have you ever played Tap Tap Revenge on the iPhone?