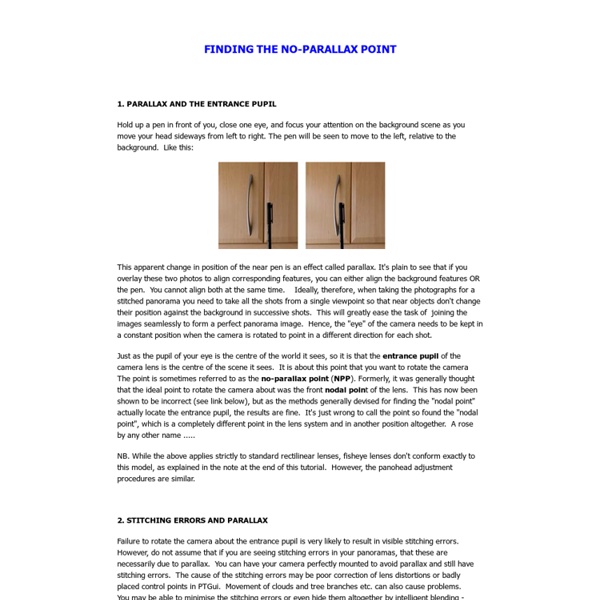 Hold up a pen in front of you, close one eye, and focus your attention on the background scene as you move your head sideways from left to right. The pen will be seen to move to the left, relative to the background. Like this: This apparent change in position of the near pen is an effect called parallax. Just as the pupil of your eye is the centre of the world it sees, so it is that the entrance pupil of the camera lens is the centre of the scene it sees. NB. Failure to rotate the camera about the entrance pupil is very likely to result in visible stitching errors. The bottom line is that if you want to check if your camera is correctly set up to avoid parallax, then you should do some tests designed specifically to reveal the presence of parallax. Related:  Tips and tricks

Linear Panoramas (Mosaic) Tutorial | This week in panospace Another development cycle is coming to an end. Bruno released libpano13 2.9.17 and paved the way for Hugin 2010.2.0. This version of Hugin will bring a lot of new features, amongst others a versatile masking tool and finer grained control of the control point (CP) detection process, courtesy of Thomas Modes. Good news for Windows user as well: galvanized by Emanuele Panz and his new NSIS based installer that solves the issues with distribution of patented software, also the Windows users community is on the forefront this time. Time to do some cool stuff with Hugin: mosaics. The basic functionality for mosaics has been in the repository for about a year, and it has matured well. Stitched mosaics differ from traditional stitched panorama in two major ways: In an ideal mosaic, all images depict a single, perfectly flat subject.The images are taken from different points of view. Mosaics present a few challenges of their own. Shooting Not much is flat in the real world. Order Setting the Stage

Wiki Creating Panoramas with PTGui and Panotools We will now create a panorama by using 5 photos, shot handheld in portrait mode. If you want to follow the tutorial by using my example pictures, you can download them here (1.8 MB) and extract them to a folder called "C:\tutorial". In comparison to the previous versions of PTGui, Ver. 5 has tons of new features - one of them is a very helpful Assistant which we will heavily use for creating our panorama. Before we start for the first time, we have to define some helper applications - at least an image viewer to be able to preview our stitching results. Go to the menu "Tools" - "Options" and select the tab "Directories & Files".

Panorama Tutorials-Home The links to the left details my experience and methodology over the last ten years taking and creating interactive panoramic photographs. My camera and equipment has been changed during this period as digital SLR cameras have evolved. My current setup is here: The Manfrotto 055 Pro tripod with Leveling Centre Column 555B The 360precision panorama head Canon 5D - using manual white balance, manual exposure, and manual focus Canon 15mm f/2.8 Fisheye lens Canon remote release For each node, I photograph 6 around, 1 up and 2 down. The creation of the panoramas from each collection of 9 photographs is quickly performed by either Realviz Stiticher Unlimited (RVS U) 5.5 or by using PTGui 6.0.3, both these software packages are available for Apple Mac OS X or MS Windows XP. Additional post-processing is done by using actions in Adobe Photoshop CS2 and ClickHere's CubicConvertor.

PanoTools.org Wiki Panorama Stitching | dpBestflow Basics In the age of the digital image, panoramic photography is a technique of shooting multiple images of a single scene and combining them to form a single image with a wide field of view, from a relatively narrow capture of two to three frames along a horizontal to a deep zoom image composed of 30 frames, encompassing far more then the human eye’s natural field of view. Panoramic images are distinguished from wide angle images by their aspect ratio. History Panoramic photography as a technique began to appear nearly as soon as the creation of the photographic image itself. Panoramic cameras became commonplace after the development of flexible film, and a number of dedicated panorama camera models were manufactured, from fixed lens cameras that had flat film planes and stationary lenses, to rotating lens systems with curved film planes, to rotating or “scanning” cameras that captured 360º of a scene. Types of panoramas Single row panoramas Multi-row panoramas 360º panoramas Joiners Workflow

Tips & Tricks FAQ What kind of camera will I need? A digital SLR camera with interchangeable lenses is the ideal solution, but almost any camera will work if you can lock the aperture, lock the focus, and lock the white balance. Ultimately, you get what you pay for. Digital SLRs generally have more options for white balance, mirror lockup, etc… the more choices, the better! If you want a camera with the most convenient HDR shooting setup, choose a camera that has an auto-bracketing (AEB) option. Back to top 4 Rules of shooting HDRs Lock f-stop (aperture – which controls your depth of field) Lock focus Lock white balance Turn off any in camera "automatic" image enhancing (i.e.: auto-contrast or auto-saturation, including sharpening) You will be bracketing the exposure time for your various exposures.