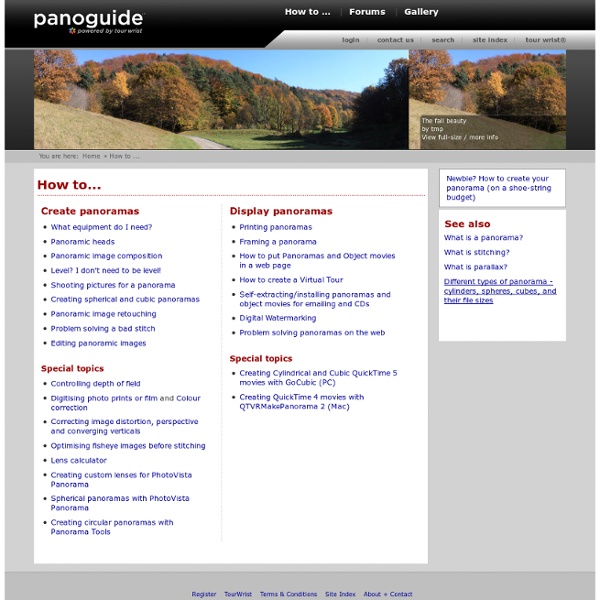 Tips & Tricks FAQ What kind of camera will I need? A digital SLR camera with interchangeable lenses is the ideal solution, but almost any camera will work if you can lock the aperture, lock the focus, and lock the white balance. Ultimately, you get what you pay for. Digital SLRs generally have more options for white balance, mirror lockup, etc… the more choices, the better! Back to top 4 Rules of shooting HDRs Lock f-stop (aperture – which controls your depth of field) Lock focus Lock white balance Turn off any in camera "automatic" image enhancing (i.e.: auto-contrast or auto-saturation, including sharpening) You will be bracketing the exposure time for your various exposures.

Nodal Point The Nodal Point The Nodal Point of the lens (or more correctly, the entrance pupil) can be considered as the point at which the rays entering the lens converge. It can also be considered as the centre of perspective of the lens or the apparent pupil. This point can be considered as the Front Nodal Point as the lens also has a Rear Nodal Point and in a simple lens the two nodes converge to a single point. The term Nodal Point is used here because for decades it has been accepted as the term defining the point where the rays entering the lens apparently converge and has been referred to by this nomenclature in a considerable number of Photogrammetric papers and publications, but let us not let terminology detract from the message. It is important to know the location of this point (entrance pupil) for Photogrammetric purposes. This point is also the ideal point to rotate your lens around when taking images to 'stitch' together to produce panoramic images. The conventional approach ...

Panoramic Image Projections An image projection occurs whenever a flat image is mapped onto a curved surface, or vice versa, and is particularly common in panoramic photography. A projection is performed when a cartographer maps a spherical globe of the earth onto a flat piece of paper, for example. Since the entire field of view around us can be thought of as the surface of a sphere (for all viewing angles), a similar spherical to 2-D projection is required for photographs which are to be printed. Narrow Angle of View(grid remains nearly square) Wider Angle of View(grid is highly distorted) For small viewing angles, it is relatively easy to distort this into an image on a flat piece of paper since this viewing arc is relatively flat. If all the above image projection types seem a bit daunting, try to first just read and understand the distinction between rectilinear and cylindrical (shown in bold), as these are the ones which are most widely used when photo stitching digital panoramas. Cylindrical Mercator

Masking for enblend with SVG and Inkscape Here is an incredibly simple two shot panorama: ..notice that there are people right in the middle where the shots overlap. The Hugin 'Preview window' shows this quite well in 'difference' mode: ..where you can see the people and their shadow cover nearly the entire overlap area. I'll stitch this in Hugin using enblend (and I'll save the remapped images because we'll need them later): ..after rendering for some time, you can see that enblend has done a reasonable job by deciding to place the seam to include the people in the middle: ..though the seam cuts through their shadow in a strange way. Now lets try to change the blend using Inkscape. (this takes a while as it is tracing the alpha channel outlines and converting them to SVG clipping masks) ..once that is done, this SVG file can be opened in Inkscape. Layers can be turned on and off. ..note that the polygon is a series of spline curves and can be re-edited easily. ..releasing the mask turns it into a 'normal' polygon.

FINDING THE NO-PARALLAX POINT Hold up a pen in front of you, close one eye, and focus your attention on the background scene as you move your head sideways from left to right. The pen will be seen to move to the left, relative to the background. Like this: This apparent change in position of the near pen is an effect called parallax. It's plain to see that if you overlay these two photos to align corresponding features, you can either align the background features OR the pen. You cannot align both at the same time. Just as the pupil of your eye is the centre of the world it sees, so it is that the entrance pupil of the camera lens is the centre of the scene it sees. NB. Failure to rotate the camera about the entrance pupil is very likely to result in visible stitching errors. The bottom line is that if you want to check if your camera is correctly set up to avoid parallax, then you should do some tests designed specifically to reveal the presence of parallax.

No-parallax point If you rotate your camera around some randomly chosen point, your images may show parallax and be difficult to stitch. With most lenses, there is one special point around which you can rotate your camera and get no parallax. This special " no-parallax point " is the center of the lens's entrance pupil , a virtual aperture within the lens. In the panorama photography community, this special point is often called the " nodal point ", but it is in fact unrelated to the actual nodal points of the lens. 1 , 2 The actual nodal points are other points on the optical path, which are of no significance to most photographers. The no-parallax point is also the "center of perspective", but this term is not commonly used and does not describe why the no-parallax point is important. The entrance pupil is the image of the limiting aperture or diaphragm, as seen through the front of the lens. Everything considered, the best term for the no-parallax point may be (surprise!) See also References Links