Startups, This Is How Design Works – by Wells Riley 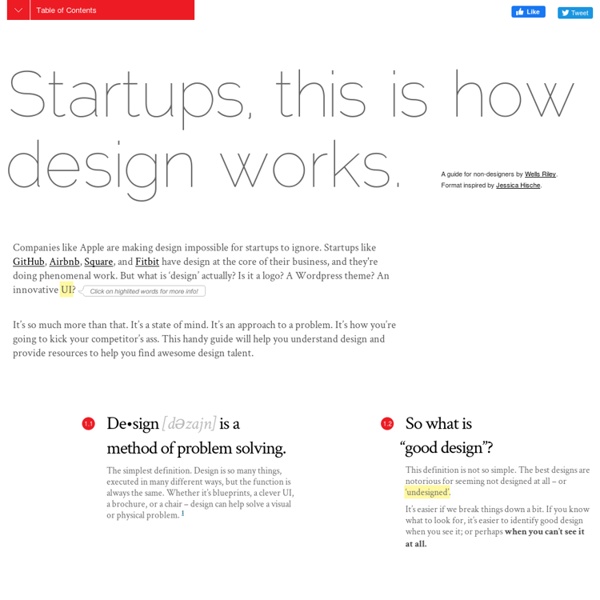 Beginning Infographics: Information Driven Storytelling Infographics are great—they share ideas and information effectively, work as essential communication tools and let's be honest, they can look pretty cool. Infographics are an amazing way to share new & interesting information with friends & audiences all over. It's the reason why we see them so often—they are a great tool for distilling really complex ideas down into easily digestible stories. Whether you're an experienced designer with a desire to experiment with data, an ambitious student interested in seeing how we work on client projects, or maybe even a non-creative who wants to get some tips on how to better communicate information to their audience—we're here to help you through your own personal journey.

25 User Experience Videos That Are Worth Your Time - Smashing UX Design Advertisement We’re all mostly accustomed to educating ourselves by reading articles. Rare are the opportunities to attend conferences or watch live shows on subjects that we’re interested in.

The Importance of Frustration in the Creative Process, Animated by Maria Popova “Before we can find the answer — before we can even know the question — we must be immersed in disappointment.” Last week, Jonah Lehrer took us inside “the seething cauldron of ideas” with Imagine: How Creativity Works, his long-awaited (by me, at least) new book. Let's Be Frank I keep coming back to this notion that design, in its rawest form, has no boundaries. Thus, sequestering one’s thoughts and ideas to a narrow set of disciplines, such as interaction design or UX design, does a disservice to ideation and inspiration. Our history as a creative culture is vast, and the people I’m interested in are those who tinker with our world and challenge perception with theories and crazy ideas that often go against conventional wisdom of the day—those who sit on the fringe of possibilities to keep our businesses, communities, lives, world, and imaginations moving forward.

Design Is a Job Design Is a Job by Mike Monteiro Our ebooks support Kindle, iBooks, Nook and most other readers and devices. Audiobook How to Launch a Startup Without Writing Code Have an idea for a startup, but no technical skills to build it? Did you know that some of the world's greatest tech startups were in fact launched with very little technology? These are companies that were acquired for $50-$540 million, or IPO'd. How did they do it? Screw the Power Users I designed HomeSite and TopStyle for power users. Only power users would want to edit HTML & CSS by hand, so I made sure to cater to them. Those products were filled with features and tool buttons, and their settings dialogs contained dozens of geeky options. Customers liked them that way. I liked them that way, too.

Hollywood Designers Featured on Video – and a Filter Foundry Exclusive Promo! Inspiration, Resources March 5, 2012 We’ve teamed up with Filter Foundry to give you some videos to devour for a change, from Hollywood designers who have exclusive tutorials up on their network! They’re also generously giving You The Designer readers an exclusive promo code to sign up on Filter Foundry with, for free. Check all this out below! Top Hollywood movie poster designer, Tomasz Opasinski shows how he creates an amazing abstract design using Autodesk Mudbox. Dieter Rams / Selector for 25/25 - Celebrating 25 Years of Design Dieter Rams Industrial Designer (1932-) Selector for 25/25 - Celebrating 25 Years of Design 29 March - 22 June 2007 As head of design at Braun, the German consumer electronics manufacturer, DIETER RAMS (1932-) emerged as one of the most influential industrial designers of the late 20th century by defining an elegant, legible, yet rigorous visual language for its products.

Apple Design Chief Jonathan Ive Knighted in Buckingham Palace, Says 'Best Work' is Underway Now BBC reports that Apple's design chief Jonathan Ive was knighted today in Buckingham Palace, with Princess Anne performing the honors. Ive's knighthood was announced in December, but the official ceremony was not held until today. Ive's knighthood was accompanied by a rare extensive profile and interview with The Telegraph in which he shares details on his background and philosophy. Contract Writing for Freelancers So you've been in business for yourself for a little while. You know you should have a contract, maybe you even have one, but is it really comprehensive? Maybe you can't afford a lawyer and you've cobbled together your own version on a wish and a prayer. Predictably Irrational Predictably Irrational: The Hidden Forces That Shape Our Decisions is a 2008 book by Dan Ariely, in which he challenges readers' assumptions about making decisions based on rational thought. Ariely explains, "My goal, by the end of this book, is to help you fundamentally rethink what makes you and the people around you tick. I hope to lead you there by presenting a wide range of scientific experiments, findings, and anecdotes that are in many cases quite amusing. Once you see how systematic certain mistakes are--how we repeat them again and again--I think you will begin to learn how to avoid some of them".[1] The book is unique in that it offers a down-to-earth descriptions of rigorous academic research that is described in a very appealing and accessible manner. Chapter summary[edit] Ariely discusses many modes of thinking and situations that may skew the traditional rational choice theory.