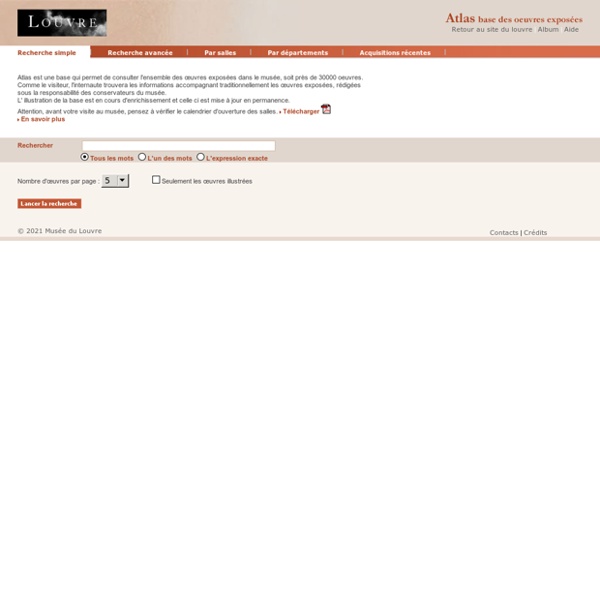 Woking College Loan Share on facebook Woking College Loan A collection of over 50 ancient Egyptian objects travelled from Surrey to Swansea, and arrived at the the Egypt Centre today (31st May 2012). Items on loan include a Sokar hawk, shabti figures, two glass bottles, a Sekhmet amulet, a Shu amulet (left), a bell in the shape of a Bes head, pottery vessels, a papyrus or lotus shaped pendant, etc. A selection can be seen above and via the links (better pictures to follow). Wikipedia The Museum of Fine Arts of Lyon ((French) Musée des beaux-arts de Lyon) is a municipal museum of fine arts in the French city of Lyon. It is housed near place des Terreaux in a former Benedictine convent of the 17th and 18th centuries. It was restored between 1988 and 1998, and despite these important restoration works it remained open to visitors. Its collections range from ancient Egypt antiquities to the Modern art period and make the museum one of the most important in Europe.

Syrian Heritage - Iconem Syrian culture is our common heritage. We are losing it. What can we do to preserve this culture for future generations? Documentation can’t wait! Deir el-Medina stelae in the Egyptian Museum in Turin Stele of Amennakhte19th dynasty, around 1295-1186 BCLimestoneRectangular limestone stela of Amennakht, possibly originating from the sanctuary of Ptah and Meretseger. Most probably intended to depict the sanctuary with its two hills. The relief ornamentation of the four sacred cobras in the upper part of the stela is intended to be a symbolic representation of the "Great Peak of the West". The goddess shown on the right, personifies the peak, and is called "Isis the Great".

Wikipedia The Egyptian Museum of Berlin (German: Ägyptisches Museum und Papyrussammlung) is home to one of the world's most important collections of Ancient Egyptian artifacts. The collection is part of the Neues Museum. History[edit] The museum originated in the 18th century from the royal art collection of the Prussian kings.[1] Alexander von Humboldt had recommended that an Egyptian section be created, and the first objects were brought to Berlin in 1828 under Friedrich Wilhelm III. After the Second World War, during which it was heavily damaged, the museum was divided between East and West Berlin, being reunited again after the Reunification of Germany.[1]

The Fitzwilliam Museum : Pharos - explore the collections by theme or time Pharos is a separate website, designed to guide the visitor through the extensive collections of The Fitzwilliam Museum, illuminating a selection of the treasures it contains. Take an introductory tour or explore the collections by theme or time. Pharos uses the Flash Player plug-in for some content. Pharos website Wikipedia Roemer- und Pelizaeus-Museum The Roemer- und Pelizaeus-Museum Hildesheim is a museum in Hildesheim, Germany. Mostly dedicated to Ancient Egyptian and Ancient Peruvian art, the museum also includes the second largest collection of Chinese porcelain in Europe. Furthermore, the museum owns collections of natural history, ethnology, applied arts, drawings and prints, local history and arts, as well as archeology. Apart from the permanent exhibitions, the museum hosts temporary exhibitions of other archaeological and contemporary topics. In 2000, the old building, originally built in the 1950s, was replaced by a new building, significantly increasing the space available for exhibitions.

Dutch National Museum of Antiquities On this search page you can see more than 40,000 objects from the collection of the Rijksmuseum van Oudheden. The data base is still expanding and contains objects from all collection aereas of the museum: ancient Egypt, Classical World (Greeks, Romans, Etruscans), ancient Near East and the early Netherlands (until 1600 AD). For application of loans, please contact the museum's registrar.

Roemer-Pelizaeus Hildesheim The third part of the permanent exhibition focuses on some of the ancient Egypt antiquities, that can be seen as the most important source of knowledge about this culture: The belief in an afterlife. Organized into the areas “Man” and “Animal”, the exhibition picks up the two most important forms of burial, because in Egyptian belief the eternal accommodation of animals, which represent various Gods, is as important as that of men. Impressive examples show the architecture of private people’s tombes, among them the offering chapel from the Mastaba of Uhemka.

Phoebe A. Hearst Museum of Anthropology Phoebe Hearst met George A. Reisner on her first trip to Egypt in early 1899. While the American Egyptologist had no excavating experience at this time, Hearst had faith in his abilities and sent him to work immediately. Wikipedia The museum's home in the reopened building of the Alte Nikolaischule. The Museum of Antiquities of the University of Leipzig (German: Antikenmuseum der Universität Leipzig) is a collection of antiques in Leipzig, Germany. History[edit] The foundations of the collection were laid in the first half of the 18th century, with the first acquisitions of antiques by the University. As early as 1735, Johann Friedrich Christ, archaeologist and professor of poetry, used antiques from his ownership in lectures.[1] In the early 19th century the antiques collection acquired the title "Archaeology and Art Cabinet".