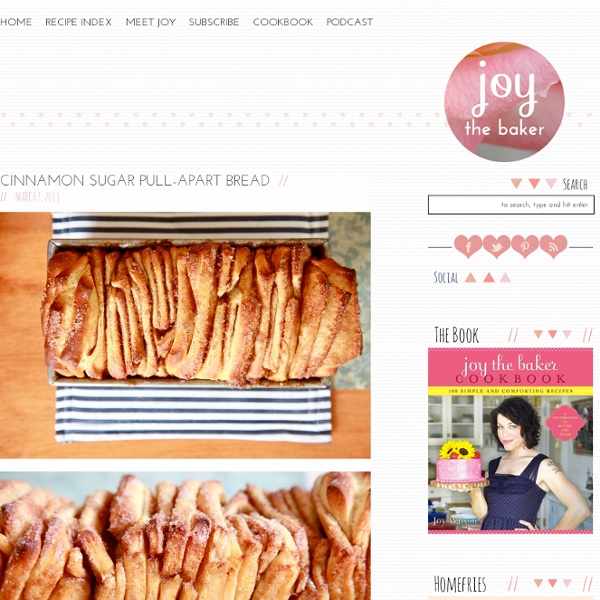 I’m sorry. I know it’s Monday morning and you probably came here for some pretty pictures of food that you could glance at, and then move on with your day… and here I go thrusting warm, soft cinnamon sugar bread in your face. It’s not fair. I know it’s not fair. I know that now you’re craving cinnamon rolls, and cream cheese frosting and chili fries and hot dogs. I am too… and I already ate half of this warm bread. You don’t deserve this sort of torture. This bread hits all the comfort spots in my soul. I’m sorry and you’re welcome and I love you. Let’s start at the beginning. I did this all without the use of a stand mixer and dough hook. This dough can be made and left to rise , then refrigerated overnight for use in the morning. This is the dough just before it’s left to rise. After the dough has rested and risen for an hour, I knead it in a few tablespoons of flour. This is the part in the bread process where you can wrap the dough and place it in the fridge to rest overnight.

Homemade Soft Pretzel Bites Homemade Soft Pretzel Bites On Fridays, I teach cooking classes to two kids in our neighborhood. They are pretty knowledgeable-so my job is easy:) I think it is fantastic that they want to learn how to cook at such a young age-they are in the 3rd and 4th grade. Since we don’t have any kiddos yet, I am glad I get to work with these kids. We have a great time in the kitchen.

Browned Butter Blueberry Muffins There are three things I want you to take away from this post. No foolin’ around… I’ll get straight to the point. One. You’ll want to stop by tomorrow if you think you might like to be one of those people that attends my (holy heck yes!) summer party. It’s in August. 10 Power Food Combos The Oscar winning visionary filmmaker opened up during a Reddit AMA on Saturday afternoon. James Cameron, the acclaimed filmmaker behind sci-fi classics like Terminator, Aliens, and Terminator 2, as well as the blockbuster behemoths Titanic and Avatar, participated in a surprisingly candid Reddit AMA on Saturday afternoon. The self-proclaimed “king of the world” was online promoting Years of Living Dangerously, a 9-part documentary series about the filmmaking styles of top directors, which will premiere on Sunday, April 13 on Showtime. And Redditors, as is their wont, didn’t let Cameron off easy, prodding him with questions ranging from how to find missing Malaysia Airlines flight MH370—Cameron knows how, apparently!—to his thoughts on climate change, Leonardo DiCaprio, Arnold Schwarzenegger, and more. Here’s the cream of the crop.

Cinnamon Toast&Rolls The USDA released its new food pyramid the other day (which is actually a plate now instead of a pyramid), and I am sorely disappointed to report that cinnamon rolls did not appear anywhere on that plate. I think by now most of us know what should be on our dinner plate in terms of healthy, well-rounded nutrient-laden meals, but it is my considered opinion that our breakfast plate should include cinnamon rolls now and then. And not just any cinnamon roll, mind you, but how ‘bout a homemade cinnamon roll hybrid that is a cross between a cinnamon roll and cinnamon toast, is super easy to make and gosh darn delicious. In honor of their ancestry, I call these little gems cinnamon toast rolls, and here’s all you need to make them… Merriment Design & Spinach, Ham And Parmesan Quiche I’m not sure what it is about spring but I go into quiche mode. I noticed the other day at Lovely Bakery that quiche was on the menu, so I decided to make one myself at home …while watching guilty pleasure The Real Housewives of New York City (oof). I adapted Elise’s recipe based on what I had in the refrigerator, subbing out Gruyère for Parmesan, spinach for asparagus, green onions for shallots, rice milk for milk and ditching the cream. The flavors worked really well together and it tasted great!

Cilantro and Coriander Seed Naan So, you tell me you love Naan. I ask you why? - You say you love the way its bready and airy texture blows your mind away. I ask you how often you eat it then? You say as often as you make that weekly trip to Indian/Pakistani restaurant. I ask you why? Cheese-Garlic Biscuits (As served at Red Lobster) From: "Maureen Sgambelluri" Date: 21 Oct 1993 13:27:35 -0500 Heat oven to 450#161# 2 cups Bisquick(r) Baking Mix 2/3 cup Milk 1/2 cup shredded cheddar cheese (2 ounces) 1/4 cup margarine or butter, melted 1/4 tsp. garlic powder Mix baking mix, milk and cheese until soft dough forms; beat vigorously 30 seconds. Drop dough by spoonfuls onto ungreased cookie sheet. Bake 8 to 10 minutes or until golden brown.

Chocolate Cupcakes with Flaming Strawberries Call me easily amused, but these little torch-topped cupcakes delight me. Besides being a cute novelty item for a party, I think they would add a little drama to the end of a romantic meal. I've been looking for something different to serve for Valentine's dessert, and this is definitely different. The strawberries are hollowed out and filled with a bit of liquor, then ignited with a match. For the cake portion, I chose a One Bowl Chocolate Cupcake recipe because 1. it's quick 2. it is easy, and 3. it fits my prerequisite for a light ending on date night.

{Marshmallow} DIY Wedding Favors Austin Weddings Austin Wedding Venues Austin Wedding Planners Austin Wedding Florists Roy G. Biv Smoothies I’ve had a few requests over the last few weeks for some smoothie recipes because I let it slip that Betsy and I generally just have a big smoothie for breakfast everyday. Turns out our daily smoothie recipe is a mix between yellow, red, and indigo, but that’ll make more sense to you later. Smoothies can be so varied I really struggled for awhile on how to present a wide spectrum of recipes in one post. That was, of course, until I saw a guy riding a bike last weekend with a rainbow sticker on his backpack. When I saw the rainbow I thought, now those would be some awesome smoothies! Blini – Traditional Russian Pancakes Blini Russian Pancakes Pancakes have been enjoyed the world over for centuries. It’s no surprise then that different cultures have developed their own popular cuisine built around pancakes.

Double White Chocolate and Pretzel Peanut Butter Cookies…with Sea Salt Not sure what my infatuation is with peanut butter cookies lately, can NOT get enough. This recipe was inspired by another little jar of famous peanut butter from Spread Restaurant called….White Chocolate Pretzel Peanut Butter. Needless to say I ate the whole jar with nothing but a spoon in a few short days. After it was gone I knew I had to create a cookie with the same flavors.

Bootstrapper » Top 100 Foods to Improve Your Productivity Besides eating to lose weight, why not eat to improve your productivity? Whether the following foods help sharpen your eyesight, keep your brain focused, or just fill you up without making you feel lazy, you’ll find they’ll help you keep your day on track. Energy and Brain Foods Cinnamon Roll Pancakes Updated 9/22/11 to Add: If you’re coming here to sample these delicious Cinnamon Roll Pancakes, you just might like the latest recipe that I’ve posted for Pumpkin Cinnamon Roll Pancakes too. And Gingerbread- Cinnamon Roll Pancakes too. Enjoy! Here’s a short video sharing how to make these delicious pancakes: If you’ve ever thought you needed a reason to eat pancakes, today is the day: National Pancake Day! Eat a short stack for breakfast, enjoy them for lunch, or make a dinner out a manhole-sized pancake… guilt free… because you’re merely celebrating their existence.