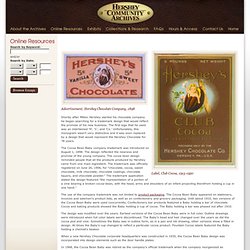 The first logo that he used was an intertwined 'H', 'C', and 'Co.' Unfortunately, this monogram wasn't very distinctive and it was soon replaced by a design that would represent the Hershey Chocolate for 78 years. The Cocoa Bean Baby company trademark was introduced on August 1, 1898. The use of the company trademark was not limited to product packaging. The design was modified over the years. When a new Hershey Chocolate corporate headquarters was constructed in 1935, the Cocoa Bean Baby design was incorporated into design elements such as the door handle plates.

In 1968, the Cocoa Bean Baby was retired as the company's official trademark when the company reorganized as Hershey Foods Corporation. Boiled Sweets. Fill a jar with a selection of different sweets, add a free personalised label, and send as a gift. 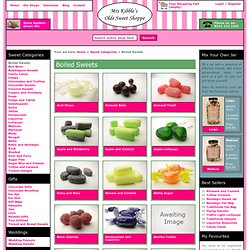 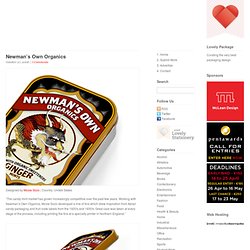 Working with Newman’s Own Organics, Moxie Sozo developed a line of tins which drew inspiration from Italian candy packaging and fruit crate labels from the 1920′s and 1930′s. Great care was taken at every stage of the process, including printing the tins at a specialty printer in Northern England.” Ironbridge Gorge Museum - Blists Hill Victorian Town. Experience life as it was over 100 years ago through the sights, sounds, smells and tastes of a recreated Victorian Town.

Victorian characters will give you a fascinating insight into Victorian life as they go about their daily lives in their cottages, shops and places of work. You should allow 2 - 4 hours for a visit to Blists Hill Victorian Town. The site covers an area of 52 acres and is mostly outdoors. You will need to be adequately dressed for the weather as well as for walking on unmade roads.

Check the Events Calendar for further information on the range of hands-on activities and events which run during most school holidays. Sweet Shop - old fashioned sweets, retro candy, sweet jars and hampers at Handy Candy. A History of Sweets. Potato crisps were invented in 1853 and Kendal mint cake was invented in 1869. 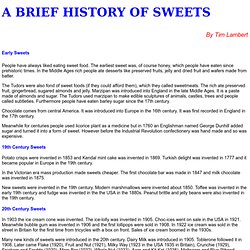 Lovehearts were first made in 1933. Walnut Whip was first sold in 1910. The first ready salted crisps were sold in 1960. In Britain sweets and chocolate were rationed from 1942 to 1953. 5 February 1953 was a day of rejoicing for children! A timeline of sweets Home. A Timeline of Sweets. Www.historicfood.com/The Art of Confectionery.pdf.