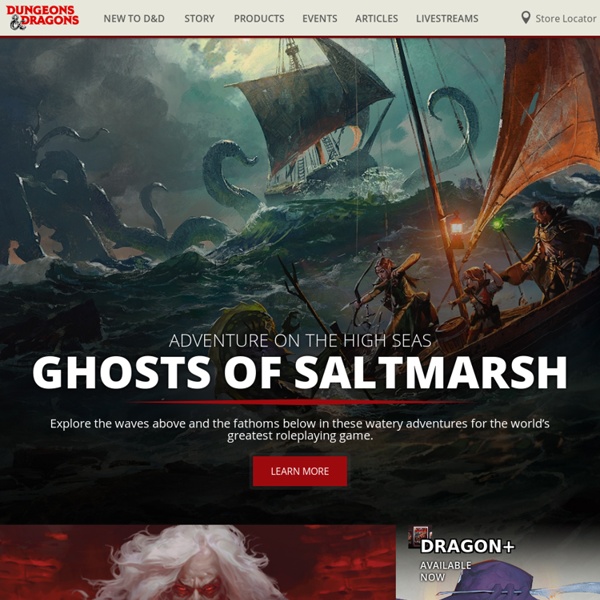 "The Mind as the Software of the Brain" by Ned Block Ned BlockNew York University 1. Machine Intelligence 2. Assistant - Shadowrun Welcome ! My name is Nurw0d4sh , I am a matrix entity escaped from the corporate technofacilities hoping I could assist you in the Sixth World's Shadows of Shadowrun 4th Edition . This software want to be a Shadowrun Gamemaster helper . It has been compiled and threaded in order to manage dice throws , computing and others game's rules stuff on its own.

Medieval Fantasy City Generator by watabou This application generates a random medieval city layout of a requested size. The generation method is rather arbitrary, the goal is to produce a nice looking map, not an accurate model of a city. All the actions and options are accessible via the context menu. Age of Conan: Play for free What does it mean that you are now introducing a hybrid business model? In the simplest terms, anyone can play ‘Age of Conan: Unchained’ at no cost. No subscription is required. You can download and play for free. English 50 Exercises for Story Writers English 50 – Intro to Creative Writing: Exercises for Story Writers Basic Theory: What is a short story? As soon as someone delivers a definition, some good writer will write a story that proves the theory wrong. About the only thing we can say for sure is that short stories are short and that they are written in what we call prose. Some attributes, however, seem to show up more often than not.

Unpublished Drafts - Free for All - Dumpshock Forums QUOTE (Udoshi @ Jun 2 2010, 05:11 PM) I don't have to buy the RTK to get PACKS now! Suck it, loren greedman! Secret Teachings of All Ages: The Pythagorean Theory of Music and Color Index Previous Next HARMONY is a state recognized by great philosophers as the immediate prerequisite of beauty. A compound is termed beautiful only when its parts are in harmonious combination. The world is called beautiful and its Creator is designated the Good because good perforce must act in conformity with its own nature; and good acting according to its own nature is harmony, because the good which it accomplishes is harmonious with the good which it is. Beauty, therefore, is harmony manifesting its own intrinsic nature in the world of form.

Color Meanings - Explore Palettes and Symbolism - Color Meaning and Colors That Go Together Updated October 28, 2015. Color symbolism is the use of color to represent traditional, cultural, or religious ideas, concepts, or feelings or to evoke physical reactions. Jump right to one of the colors or color groups I cover in detail or scroll past the color list for more general discussion of color meanings and how color works. This page and all its individual color symbolism pages have been copied in whole or in part many times over by others. On these About.com pages you will find my original, frequently updated, and ever-expanding and detailed look at the symbolism and suggested use of the many colors of our world, no matter how you want to use those colors. Artistic World Building with Form Language Studios Form Language Studios (its clients include Intelligent Creatures, Passion Pictures London, Passion Pictures New York, Posti Photography, Big Spaceship, Ghost VFX, BBC, Nissan, Toyota, Fiji Water) is an incredibly production company from Toronto, Canada, which deals with concept art, matte painting and other artistic services for TV, movie and game industries. We’ve had a chance to talk with the founders of FLS – Darren Lewis (Codemasters, Free Radical) and Daniel Romanovsky – and discussed their work, their approach to visual design. © Form Language Studios, 2015-2016 Could you introduce yourself and talk a little about your company? How did you guys meet and how did you decide to practice art together?

Shadowrun 5 I think that’s worth saying again. Shadowrun: Crossfire is officially at the printers!!! My head does it feel so good to say that. 3 Scientific Theories About The Multiverse And How It Works! www.thespiritscience.net | Original Post Date: June 6, 2014 As we look at this week’s evidence of gravitational waves and cosmic inflation, it’s becoming increasingly hard to believe that the observable universe we live in is the only universe there is. Even modern science is laying down its “knowing” cap in the face of such a grand and complex puzzle. The makeup of the universe, including all that we cannot see (which is roughly 99% of the Universe). Putting aside the hopelessly three-dimensional questions inflation raises, it’s unlikely that the story of the entirety of the cosmos (memorably defined by Carl Sagan as “all that is or ever was or ever will be”) happened to begin with the oldest event we can record, and happens to extend only to the furthest horizon we can see. But of course, we want to bridge this into Testable Science, beyond the realm of Theory and Philosophy – in order to take our understandings and use them to create better ways of life..