Hobbies and activities for Medieval people

Entertainment and Games. History >> Middle Ages for Kids When we think of Medieval times and the Dark Ages we sometimes picture overcast days, damp castles, slaving peasants, and dungeons. 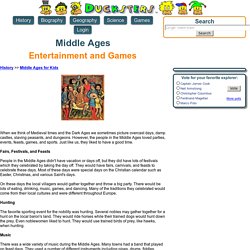 However, the people in the Middle Ages loved parties, events, feasts, games, and sports. Just like us, they liked to have a good time. Fairs, Festivals, and Feasts People in the Middle Ages didn't have vacation or days off, but they did have lots of festivals which they celebrated by taking the day off. On these days the local villagers would gather together and throw a big party. Hunting The favorite sporting event for the nobility was hunting. Music There was a wide variety of music during the Middle Ages. Troubadours One of the most popular forms of entertainment was the troubadour. Games People of the Middle Ages enjoyed a variety of games. Sports There were many athletic events at festivals and other occasions. Interesting Facts about Entertainment during the Middle Ages Monks often sung in Medieval churches. Works Cited. Tournaments and jousts. History >> Middle Ages for Kids When not fighting wars, knights needed to hone their skills. 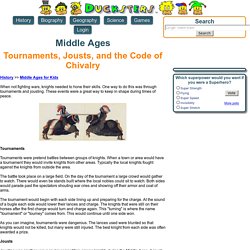 One way to do this was through tournaments and jousting. These events were a great way to keep in shape during times of peace. Tournaments Tournaments were pretend battles between groups of knights. The battle took place on a large field. The tournament would begin with each side lining up and preparing for the charge. As you can imagine, tournaments were dangerous. Jousts Jousting was another very popular competition among knights during the Middle Ages. The Ideal Knight Knights were expected to behave a certain way. Code of Chivalry Here are some of the main codes which Knights tried to live by: To follow the church and defend it with his life To protect women and the weak To serve and defend the king To be generous and honest To never lie To live by honor and for glory To help widows and orphans Many knights took vows that they would maintain the code. 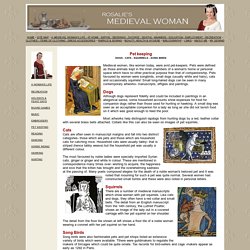 Pets were defined as those animals kept in the inner chambers of a woman's home or personal space which have no other practical purpose than that of companionship. Pets favoured by women were songbirds, small dogs (usually white and hairy), cats and occasionally squirrels! Small long-haired dogs can be seen in many contemporary artworks- manuscripts, effigies and paintings. Dogs Although dogs represent fidelity and could be included in paintings in an allegorical sense, some household accounts show expenses for food for companion dogs rather than those used for hunting or hawking. Most artworks help distinguish lapdogs from hunting dogs by a red, leather collar with several brass bells attached. Cats Cats are often seen in manuscript margins and fall into two distinct categories- those which are pets and those which are household cats for catching mice. Squirrels. Games. Medieval Board Games TRIC TRAC - CHESS - MERRILS Two of the most popular board games during the Middle Ages were chess and tric-trac, which we now call backgammon. 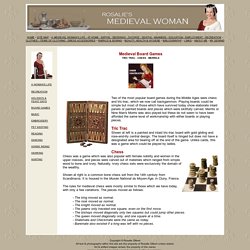 Playing boards could be simple but most of those which have survived today show elaborate inlaid panels or painted boards and pieces which were skillfully carved. Merrils or Nine Man's Morris was also played but these do not seem to have been afforded the same level of workmanship with either boards or playing pieces. Tric Trac Shown at left is a painted and inlaid tric-trac board with gold gilding and rose-and-lily central design. The board itself is hinged but does not have a designated area for bearing off at the end of the game. Chess Chess was a game which was also popular with female nobility and women in the upper classes, and pieces were carved out of materials which ranged from simple wood to bone and ivory.

Shown at right is a common bone chess set from the 14th century from Scandinavia. Medieval pastimes and sports. Medieval Times could be very tough depending on when in the medieval period we are talking about. 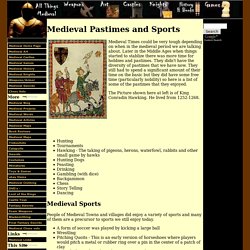 Later in the Middle Ages when things started to stablize there was more time for hobbies and pastimes. They didn't have the diversity of pastimes that we have now. They still had to spend a significant amount of their time on the basic but they did have some free time (particularly nobility) so here is a list of some of the pastimes that they enjoyed. The Picture shown here at left is of King Conradin Hawking. He lived from 1252-1268. Hunting Tournaments Hawking - The taking of pigeons, herons, waterfowl, rabbits and other small game by hawks Hunting Dogs Feasting Drinking Gambling (with dice) Backgammon Chess Story Telling Dancing.