How to Stop Absorbing Other People’s Emotions 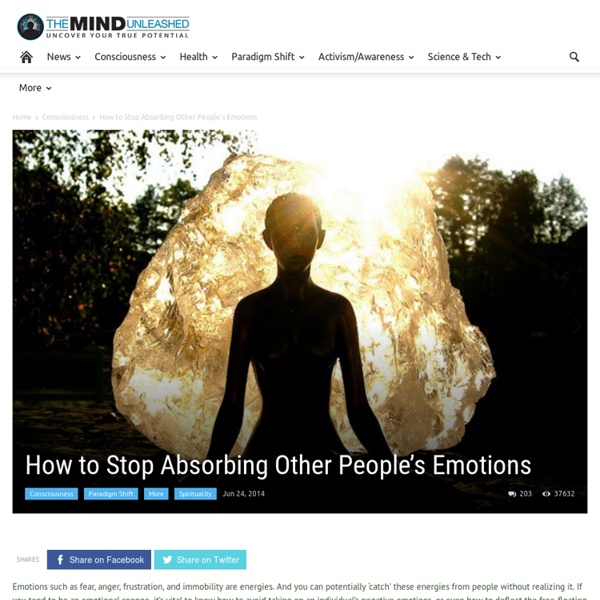 Emotions such as fear, anger, frustration, and immobility are energies. And you can potentially ‘catch’ these energies from people without realizing it. If you tend to be an emotional sponge, it’s vital to know how to avoid taking on an individual’s negative emotions, or even how to deflect the free-floating negativities in crowds. Another twist is that chronic anxiety, depression, or stress can turn you into an emotional sponge by wearing down your defenses. Suddenly, you become hyper-attuned to others, especially suffering with similar pain. That’s how empathy works; we zero in on hot-button issues that are unresolved in ourselves. From an energetic standpoint, negative emotions can originate from several sources: what you’re feeling may be your own; it may be someone else’s; or it may be a combination. Stop Absorbing Other People’s Emotions 1. People call you “hyper-sensitive”, “overly sensitive”, etc., and they don’t mean it as a compliment! 2. 3. 4. 5. 6. 7. 8. 9. About the Author

Related:  Auras & Energy • it's all in the mind • Metaphysic

Breathing: Three Exercises "Practicing regular, mindful breathing can be calming and energizing and can even help with stress-related health problems ranging from panic attacks to digestive disorders." Andrew Weil, M.D. Since breathing is something we can control and regulate, it is a useful tool for achieving a relaxed and clear state of mind. I recommend three breathing exercises to help relax and reduce stress: The Stimulating Breath, The 4-7-8 Breathing Exercise (also called the Relaxing Breath), and Breath Counting. Try each of these breathing teachniques and see how they affect your stress and anxiety levels. Exercise 1:

How brain waves guide memory formation Our brains generate a constant hum of activity: As neurons fire, they produce brain waves that oscillate at different frequencies. Long thought to be merely a byproduct of neuron activity, recent studies suggest that these waves may play a critical role in communication between different parts of the brain. A new study from MIT neuroscientists adds to that evidence. How to Heal Emotional and Spiritual Blockages HJ: The only thing keeping you from having what you want — particularly the life, happiness and fulfillment you want — are emotional and spiritual blockages. Emotional states create outcomes. Your emotional state determines what you are capable of doing and becoming. A severely depressed person will constantly be struggling with themselves and hence experience the reflection of that in their lives. Someone happy and motivated will produce the opposite results of the depressed person.

Practical Physics This website is for teachers of physics in schools and colleges. It is a collection of experiments that demonstrate a wide range of physical concepts and processes. Some of the experiments can be used as starting-points for investigations or for enhancement activities. Many have links to carefully selected further reading and all include information and guidance for technicians. Physics is a practical science. How to Heal and Strengthen Your Energy Body With Auric Breathing HJ: It is believed in many traditions that all imbalances in the physical body originate from imbalances in the auric field, aka the energy body. Either way, it is just as vital and important part of yourself as your physical body and requires care and healing as well. In this article, Yonti introduces us to the powerful Auric breathing meditation which will help you keep yours balanced, cleansed, healthy and whole. – Truth

How "SuperAger" Brains Are Different Than Everyone Else's Researchers working with SuperAgers—people aged 80 and up with impeccable memory—reveal how their brains look decades younger. And compared to others their age, SuperAgers have nearly 90 percent fewer brain “tangles” linked to Alzheimer’s disease. The findings were published in the Journal of Neuroscience last week. First identified in 2007, the so-called cognitive SuperAgers displayed memories as sharp as people 20 to 30 years younger than them.

Consciousness – The Unified Field Keith R. Holden M.D, GuestWaking Times What follows is a theoretical explanation of how energies interact in our universe to create what we know, and also what we don’t know. Some of the content is scientifically proven, while other parts of this essay are based on my intuition. NASA Discovers Hidden Portals In Earth’s Magnetic Field Our planet has come a long way in scientific breakthroughs and discoveries. Mainstream science is beginning to discover new concepts of reality that have the potential to change our perception about our planet and the extraterrestrial environment that surrounds it forever. Star gates, wormholes, and portals have been the subject of conspiracy theories and theoretical physics for decades, but that is all coming to an end as we continue to grow in our understanding about the true nature of our reality. In physics, a wormhole was a hypothetical feature of space time that would be a shortcut through space-time. We often wonder how extraterrestrials could travel so far and this could be one of many explanations.

The Effect of External Energies in Your Space By Caroline Diana Bobart From an intuitive standpoint, your aura or personal space is separated from the outer world by a permeable membrane of external energies. This turns you into a multi-dimensional, etheric telephone exchange of sorts! For better or for worse, you are constantly receiving and transmitting spoken and unspoken communication with the world around you through the medium of energy. This, in turn, registers upon your sensations, feelings, and thoughts. The SECRET for Undetectable Mind Control Unless you understand how reality is manifested, your destiny and the destiny of the planet will be in the hands of the ruling elite who do understand it. “Sometimes people don't want to hear the truth, because they don't want their illusions destroyed.” -Friedrich Nietzsche Living in the third dimension can be a blissful experience when you have power, health, wealth, comforts and freedom.

Five Ways to Overcome the Energy of Fear Image credit: freeimages.com/photo/1092344 Learning how to face your fears so that you can gather enough courage to face them is one of the first steps to overcoming the energy of fear. Another very important step is to comprehend what fear is. If you don’t take the time to learn what fear is, you will have a very hard time overcoming your fears. The reason for this is because you can’t overcome fearful emotions when you aren’t even aware of how they are affecting you. Once you know what your fears are and how they affect you, it becomes easier for you to find solutions to help you overcome them. Candler's Classroom Connections Sign Up "I have spent the past few days looking at your site and enjoying your past and current newsletters. I feel like a kid in a candy store! Thanks so much for your hard work and your effort!"

Grounding Demystified 9th March 2015 By Matt Raye Guest Writer for Wake Up World DNA molecules can 'teleport', Nobel Prize winner claims A Nobel Prize winning biologist has ignited controversy after publishing details of an experiment in which a fragment of DNA appeared to ‘teleport’ or imprint itself between test tubes. According to a team headed by Luc Montagnier, previously known for his work on HIV and AIDS, two test tubes, one of which contained a tiny piece of bacterial DNA, the other pure water, were surrounded by a weak electromagnetic field of 7Hz. Eighteen hours later, after DNA amplification using a polymerase chain reaction, as if by magic the DNA was detectable in the test tube containing pure water. Oddly, the original DNA sample had to be diluted many times over for the experiment to work, which might explain why the phenomenon has not been detected before, assuming that this is what has happened.