The Trouble With Trying Children as Adults. There are numerous issues surrounding trying juveniles as adults – particularly in cases where the possibility of life without parole exists. 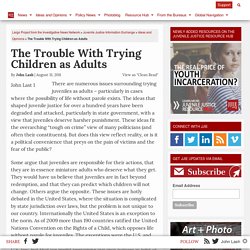 The ideas that shaped juvenile justice for over a hundred years have been degraded and attacked, particularly in state government, with a view that juveniles deserve harsher punishment. These ideas fit the overarching “tough on crime” view of many politicians (and often their constituents). But does this view reflect reality, or is it a political convenience that preys on the pain of victims and the fear of the public? Some argue that juveniles are responsible for their actions, that they are in essence miniature adults who deserve what they get. They would have us believe that juveniles are in fact beyond redemption, and that they can predict which children will not change. One instance where juvenile violence and restoration arise is in conflicts that involve children as combatants.

Schizophrenia Treatment. Table of Contents Introduction Schizophrenia usually first appears in a person during their late teens or throughout their twenties. 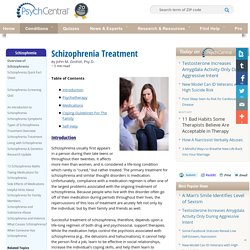 It affects more men than women, and is considered a life-long condition which rarely is "cured," but rather treated. The primary treatment for schizophrenia and similar thought disorders is medication. Schizophrenia Medication Treatment Options - Schizophrenia Schizoaffective Online - Symptoms, Treatments, Resources. Rashmi Nemade, Ph.D. 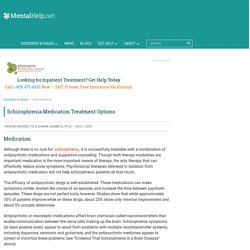 & Mark Dombeck, Ph.D. Aug 7, 2009 Medication Although there is no cure for schizophrenia, it is successfully treatable with a combination of antipsychotic medications and supportive counseling. Though both therapy modalities are important, medication is the more important means of therapy; the only therapy that can effectively reduce acute symptoms.

Psychosocial therapies delivered in isolation from antipsychotic medication will not help schizophrenic patients all that much. Schizophrenia.com - New Schizophrenia Medications. The field of neuroscience is booming, and the future of schizophrenia treatments is bright. 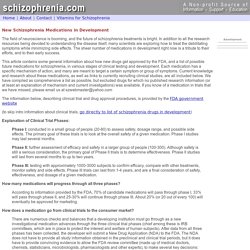 In addition to all the research resources being devoted to understanding the disease itself, many scientists are exploring how to treat the debilitating symptoms while minimizing side effects. The sheer number of medications in development right now is a tribute to their efforts, and to their early success. Cultural and Demographic Factors of Schizophrenia. Correspondence:Judy M. 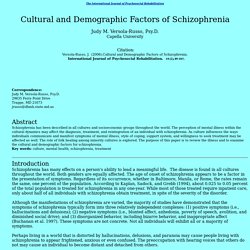 Versola-Russo, Psy.D.29635 Ferry Point Drive Trappe, MD 21673jrusso@dhmh.state.md.us Abstract Schizophrenia has been described in all cultures and socioeconomic groups throughout the world. The perception of mental illness within the cultural dynamics may affect the diagnosis, treatment, and reintegration of an individual with schizophrenia. As culture influences the ways individuals communicate and manifest symptoms of mental illness, style of coping, support system, and willingness to seek treatment may be affected as well. 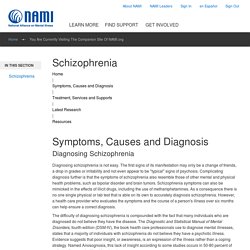 The first signs of its manifestation may only be a change of friends, a drop in grades or irritability and not even appear to be "typical" signs of psychosis. Complicating diagnosis further is that the symptoms of schizophrenia also resemble those of other mental and physical health problems, such as bipolar disorder and brain tumors. Facts and Statistics. Schizophrenia is a serious disorder of the mind and brain but it is also highly treatable. 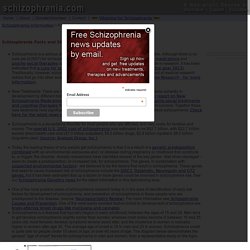 Although there is no cure (as of 2007) for schizophrenia, the treatment success rate with antipsychotic medications and psycho-social therapies can be high. If the appropriate level of investment is made in research, it has been estimated that a cure for schizophrenia could be found within 10 years (by the year 2013). Traditionally, however, schizophrenia has only received a small fraction of the amount of medical research dollars that go into other serious diseases and disorders (see below - Schizophrenia Research - for more information). New Treatments: There are over 15 new medications for the treatment of schizophrenia currently in development by different biotech and pharmaceuticals companies (source: Special report on New Schizophrenia Medications). NAMI: The National Alliance on Mental Illness. Facts and Statistics. Schizophrenia Symptoms, Patterns and Statistics and Patterns - Schizophrenia Schizoaffective Online - Symptoms, Treatments, Resources. Cultural and Demographic Factors of Schizophrenia.

All About Schizophrenia and Psychosis. Schizophrenia Information & Treatment Introduction Throughout recorded history, the disorder we now know as schizophrenia has been a source of bewilderment. 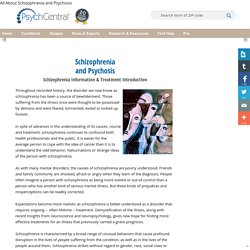 Those suffering from the illness once were thought to be possessed by demons and were feared, tormented, exiled or locked up forever. In spite of advances in the understanding of its causes, course and treatment, schizophrenia continues to confound both health professionals and the public. It is easier for the average person to cope with the idea of cancer than it is to understand the odd behavior, hallucinations or strange ideas of the person with schizophrenia. As with many mental disorders, the causes of schizophrenia are poorly understood. APA DSM-5. Types of Treatment for Personality Disorders - Personality Disorders. Simone Hoermann, Ph.D., Corinne E. 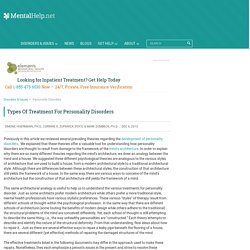 The Challenges Of Treating Personality Disorders. This is TALK OF THE NATION. 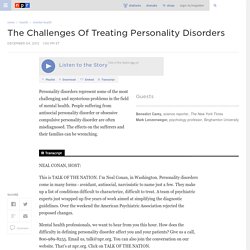 Simone Hoermann, Ph.D., Corinne E. Zupanick, Psy.D. & Mark Dombeck, Ph.D. Dec 6, 2013 No diagnostic system can be perfectly constructed. Therefore, it should come as no surprise that the current DSM-5 (APA, 2013) diagnostic system for personality disorders has its fair share of problems. Researchers and clinicians have identified several, significant, diagnostic difficulties that can be summarized as follows: Treatment Utilization by Patients With Personality Disorders: American Journal of Psychiatry: Vol 158, No 2. The purpose of the present study was to examine the patterns of mental health treatment history among patients meeting criteria for at least one of four representative personality disorders—schizotypal, borderline, avoidant, and obsessive-compulsive—compared to patients with major depressive disorder without personality disorder.

NAMI: The National Alliance on Mental Illness. While an exact cause of schizophrenia is still unknown, researchers do know that the brains of people living with schizophrenia are different from those undiagnosed with the illness. It is too early to classify schizophrenia as either a neurodevelopmental (impairment of the growth and development of the brain) or a neurodegenerative (progressive loss of structure or function of neurons) disorder, as both seem to occur over the course of the illness. Research strongly suggests the emergence of schizophrenia is a result of both genetic and environmental factors. Genetics Unlike other genetic conditions such as Huntington's or cystic fibrosis, it is believed that no one single gene causes the disease by itself but rather that several genes are associated with an increased risk of schizophrenia.

What is schizophrenia? Schizophrenia is a chronic, severe, and disabling brain disorder that has affected people throughout history. About 1 percent of Americans have this illness.1 People with the disorder may hear voices other people don't hear. They may believe other people are reading their minds, controlling their thoughts, or plotting to harm them.

Somatoform Disorders: Symptoms, Types, and Treatment. Appendix D—DSM-IV-TR Mood Disorders - Managing Depressive Symptoms in Substance Abuse Clients During Early Recovery - NCBI Bookshelf. Somatic Symptom Disorder. Paranoid Personality Disorder Symptoms. Diagnostic and Statistical Manual of Mental Disorders, Fourth Edition (DSM-IV) Psychiatric Diagnoses are categorized by the Diagnostic and Statistical Manual of Mental Disorders, 4th. Edition. Better known as the DSM-IV, the manual is published by the American Psychiatric Association and covers all mental health disorders for both children and adults. It also lists known causes of these disorders, statistics in terms of gender, age at onset, and prognosis as well as some research concerning the optimal treatment approaches. Mental Health Professionals use this manual when working with patients in order to better understand their illness and potential treatment and to help 3rd party payers (e.g., insurance) understand the needs of the patient.