40 maps that explain the internet 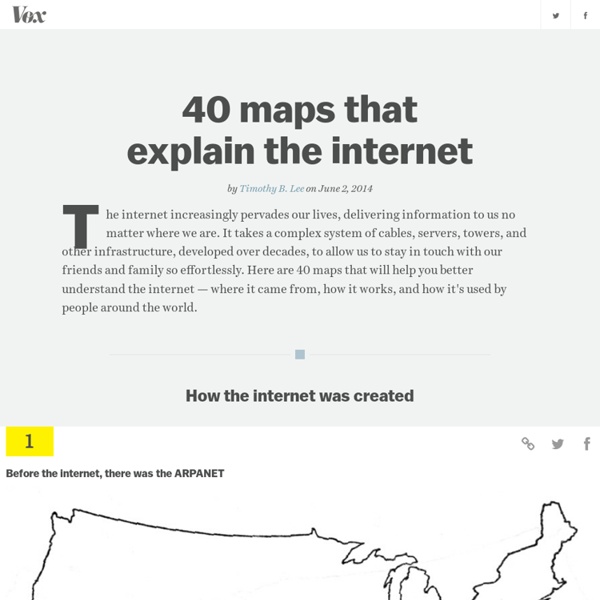 The internet increasingly pervades our lives, delivering information to us no matter where we are. It takes a complex system of cables, servers, towers, and other infrastructure, developed over decades, to allow us to stay in touch with our friends and family so effortlessly. Here are 40 maps that will help you better understand the internet — where it came from, how it works, and how it's used by people around the world. How the internet was created Before the internet, there was the ARPANET Before the internet, there was the ARPANETARPANET, the precursor to the modern internet, was an academic research project funded by the Advanced Research Projects Agency, a branch of the military known for funding ambitious research projects without immediate commercial or military applications. Initially, the network only connected the University of Utah with three research centers in California. The internet around the world Threats to the internet The geography of online services Twerking vs.

Transmission Control Protocol Web browsers use TCP when they connect to servers on the World Wide Web, and it is used to deliver email and transfer files from one location to another. HTTP, HTTPS, SMTP, POP3, IMAP, SSH, FTP, Telnet and a variety of other protocols are typically encapsulated in TCP. Historical origin[edit] In May 1974 the Institute of Electrical and Electronic Engineers (IEEE) published a paper titled "A Protocol for Packet Network Intercommunication.

Choosing the best way to indicate map scale By Aileen Buckley, Mapping Center Lead In a previous blog entry, I asked, “Do all maps need a scale bar and north arrow?” I answered, “No” and talked a little about direction indicators like north arrows, but I didn’t really go into any detail about scale bars. Here is a bit more on map scale indicators, like scale bars. Almost all maps are drawn to a scale, so it should be possible for these maps to indicate what the scale of the map is.

The Teacher's Guides To Technology And Learning Welcome to the official guide to technology and learning by Edudemic! This part of Edudemic is meant to offer you, the teacher, some of the best and most popular resources available today. We’ve combed through hundreds of resources in order to narrow down our guides into something easy to read, easy to use, and easy to share. Below are links to the guides we have made so far. They’re always a work in progress so be sure to let us know if we missed something or if you have more resources you want us to call out in the guides. We’re always looking for the best and most useful resources so don’t be shy, share! Everything Is Broken — The Message Then there’s the Intelligence Community, who call themselves the IC. We might like it if they stopped spying on everyone all the time, while they would like us to stop whining about it. After spending some time with them, I am pretty sure I understand why they don’t care about the complaining. The IC are some of the most surveilled humans in history.

First Ever Glimpse Into Facebook's Massive Arctic Server Farm Have you ever wondered where Facebook lives? There is no one line answer for that but we can start digging 70 miles from the Arctic circle, in Luleå, Sweden, where back in 2013 Facebook opened its massive data farm. Located deep in the woods of northern Sweden, the server farm is designed with sustainability in mind. Internet Protocol This article is about the IP network protocol only. For Internet architecture or other protocols, see Internet protocol suite. The Internet Protocol (IP) is the principal communications protocol in the Internet protocol suite for relaying datagrams across network boundaries. Its routing function enables internetworking, and essentially establishes the Internet.

Cartography: The true true size of Africa LAST month Kai Krause, a computer-graphics guru, caused a stir with a map entitled "The True Size of Africa", which showed the outlines of other countries crammed into the outline of the African continent. His aim was to make "a small contribution in the fight against rampant Immappancy"—in particular, the fact that most people do not realise how much the ubiquitous Mercator projection distorts the relative sizes of countries. A sphere cannot be represented on a flat plane without distortion, which means all map projections distort in one way or another.

What's changed - - The Australian Curriculum v8.0 Revisions have been made to the previously available Australian Curriculum to make the curriculum easier to manage, particularly for primary schools, to simplify the curriculum’s presentation and to strengthen the focus on literacy. To achieve this: The volume of content in learning areas has been reduced by deleting, clarifying and simplifying content descriptions, where appropriate, and moving references to examples to the content elaborations. How the web lost its way – and its founding principles In 2009, an American civil rights lawyer created a mashup mapping a neighbourhood called Coal Run, Ohio. It showed which houses were connected to the town's water supply and which houses were occupied by black or white families. A mashup uses data from more than one source, usually publicly available information, and almost always presents it on a map. The results were extraordinary: the map showed that almost all the white households in Coal Run had water piped to their homes, while all but a few black households did not. Those without piped water had to carry water home from the water plant by whatever transport they could muster, pump it from wells contaminated with sulphur and oil from old mining operations or, in extremis, collect rainwater.

The Global Internet Map This blog post was written on my laptop in London. From there it was sent digitally along fiber optic cables from my home to my Internet Service Provider's port servers. From there the post traveled to Google's servers and from there it travels via the global internet network to computers around the world. To reach your computer or phone this blog post has traveled along thousands of miles of terrestrial and submarine cables.

Mises Institute Libertarians often cite the internet as a case in point that liberty is the mother of innovation. Opponents quickly counter that the internet was a government program, proving once again that markets must be guided by the steady hand of the state. In one sense the critics are correct, though not in ways they understand. The internet indeed began as a typical government program, the ARPANET, designed to share mainframe computing power and to establish a secure military communications network. Of course the designers could not have foreseen what the (commercial) internet has become.