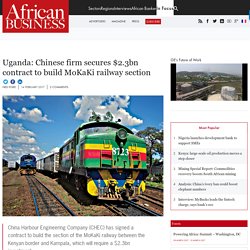 MoKaKi is the new name for the standard gauge railway (SGR) that is expected to run from Mombasa, through Nairobi, to Kampala and on to Kigali. China Road and Bridge Corporation has now completed 98% of the first section, between Mombasa and Nairobi. Kampala had signed a memorandum of understanding with China Civil Engineering Construction Corporation in 2012 for the section of line in eastern Uganda. 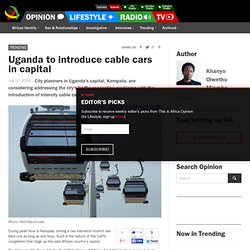 Such is the nature of the traffic congestion that clogs up the east African country’s capital. The Kampala City Council Authority (KCCA) has sought to confront this problem in an unusual way. They have already begun carrying out feasibility studies for a pilot cable car system expected to have a network that extends from the city centre to a number of suburbs. Jennifer Musisi, the KCCA’s executive director, said the authority was focusing its energy on the reduction of the capital’s congested roads, and improving public transport. Kampala Inches Closer To Cable Cars. In the next 12 days, Kampala Capital City Authority (KCCA) will announce the company that will undertake a feasibility study for cable car transport in the city. 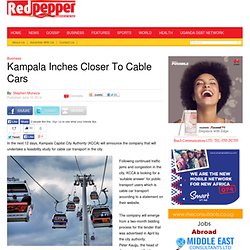 Following continued traffic jams and congestion in the city, KCCA is looking for a ‘suitable answer’ for public transport users which is cable car transport according to a statement on their website. The company will emerge from a two-month bidding process for the tender that was advertised in April by the city authority. Peter Kaujju, the head of Corporate and Public Affairs at KCCA, says the list of bidders cannot be made public at this stage but when the procurement is complete, the list will be public and the company that has been successful will be declared. 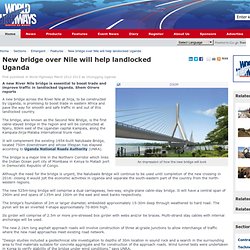 Shem Oirere reports A new bridge across the River Nile at Jinja, to be constructed by Uganda, is promising to boost trade in eastern Africa and pave the way for smooth and safe traffic in and out of this landlocked country. Uganda: U.S.$50 Million Kalangala Project to Begin. A $50m (sh135b) infrastructure project that will bring piped water, electricity and water transport to Bugala Island in Kalangala district will kick off in earnest in April. 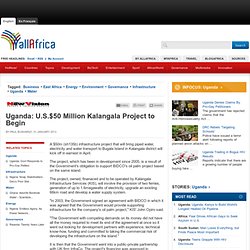 The project, which has been in development since 2005, is a result of the Government's obligation to support BIDCO's oil palm project based on the same island. The project, owned, finanaced and to be operated by Kalangala Infrastructure Services (KIS), will involve the provision of two ferries, generation of up to 1.6megawatts of electricity, upgrade an existing 66km road and develop a water supply system. "In 2003, the Government signed an agreement with BIDCO in which it was agreed that the Government would provide supporting infrastructure for the company's oil palm project," KIS' John Opiro said.

It is then that the Government went into a public-private partnership with UK firm InfraCo. London-based Ariya Capital to invest US$450 million in Uganda. A London-based company, Ariya Capital, has committed itself to investing US$450 million in Uganda to develop another airport in the country that will be known as Lukoma International Airport near SangoBay along the shores of Lake Victoria in Rakai district. 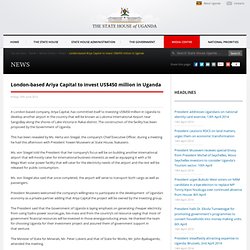 The construction of the facility has been proposed by the Government of Uganda. This has been revealed by Ms. Herta von Stiegel, the company’s Chief Executive Officer, during a meeting he had this afternoon with President Yoweri Museveni at State House, Nakasero. Uganda: 'Investors for Mbale Industrial and Business Park Set' President Museveni has urged the remaining residents still settling on government land at the proposed Mbale Industrial and Business Park site in Mbale to leave in good faith and embrace industrialization, saying government needs investors to build industries, create jobs and improve the wellbeing of Ugandans. 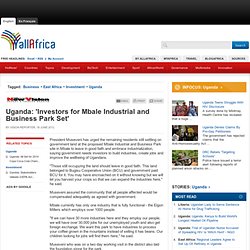 "Those still occupying the land should leave in good faith. This land belonged to Bugisu Cooperative Union (BCU) and government paid BCU for it. You may have encroached on it without knowing but we will let you harvest your crops so that we can expand the industries here," he said. Museveni assured the community that all people affected would be compensated adequately as agreed with government. Mbale currently has only one industry that is fully functional - the Elgon Millers which employs over 1000 people. "If we can have 30 more industries here and they employ our people, we will have over 30,000 jobs for our unemployed youth and also get foreign exchange.