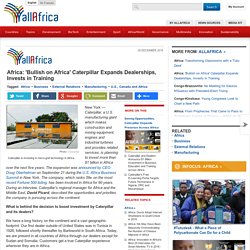 New York — Caterpillar, a U.S. manufacturing giant which makes construction and mining equipment, engines and industrial turbines and provides related services, is planning to invest more than $1 billion in Africa over the next five years. The expansion was announced by CEO Doug Oberhelman on September 21 during the U.S. Africa Business Summit in New York. The company, which ranks 59th on the most recent Fortune 500 listing, has been involved in Africa for 90 years. What is behind the decision to boost investment by Caterpillar and its dealers? We have a long history on the continent and a vast geographic footprint. We think Africa is rising in spite of the commodity challenges that the continent is facing currently.

Most companies face difficulties locating the skilled labor they need. We have state-of-the-art training for our dealer personnel. So the training is portable. Yes. Are these solar powered? Blackstone-backed group strikes African oil pipeline deal - FT.com. US-based Louis Berger to construct US$ 9.0m section of Yaoundé-Douala highway in Cameroon. Louis Berger, an engineering services company based in US has secured a five-year contract for construction works to improve a section of the Yaoundé-Douala highway in Cameroon. 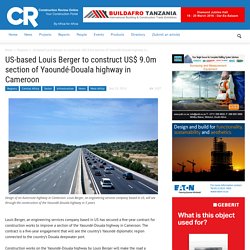 The contract is a five-year engagement that will see the country’s Yaoundé diplomatic region connected to the country’s Douala deepwater port. Construction works on the Yaoundé-Douala highway by Louis Berger will make the road a straighter and safer two-lane motorway. The highway is a busy one, attracting truck traffic and is characterized by poor maintenance and many curves, according to the company.

Indeed, Louis Berger has characterized it as one of the deadliest in the Central African region. “The new 236km highway will lead to reduced travel time and will hopefully have a positive impact on the international transportation, because Cameroon is a key transit country for the landlocked countries of Central Africa.” Colorado-Based Business Works to Spur African Entrepreneurship to Address East Africa's Clean Water Problems. Gabon - Building Infrastructure Makes 'Meaningful Impact' - Bechtel (Page 1 of 6)

Washington, DC — When President Obama travels to Africa next week - visiting Senegal, Tanzania and South Africa - infrastructure and power will be a major focus of his trip. 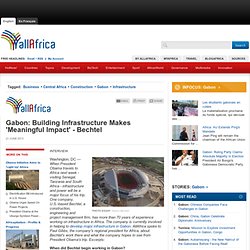 One company, U.S. -based Bechtel, a construction, engineering and project management firm, has more than 70 years of experience working on infrastructure in Africa. The company is currently involved in helping to develop major infrastructure in Gabon. AllAfrica spoke to Paul Gibbs, the company's regional president for Africa, about Bechtel's work there and what the company hopes to see from President Obama's trip.

Excerpts: When did Bechtel begin working in Gabon? The Gabon story started about 20 years ago. The country has a clear plan for what it wants to do. They have to sort out their power, they have to prioritize mining, and perhaps oil and gas investments, and then use the income that they get from those to support the domestic economy. I think it does several things. Govind Development showing interest in oil pipeline in Cameroon. YAOUNDE, Cameroon, May 28 (UPI) -- A consortium of U.S. investors is interested in constructing an oil pipeline in Cameroon. 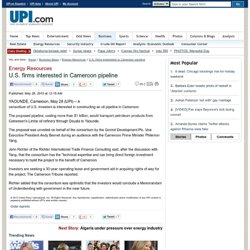 The proposed pipeline, costing more than $1 billion, would transport petroleum products from Cameroon's Limbe oil refinery through Douala to Yaounde. The proposal was unveiled on behalf of the consortium by the Govind Development Plc. Vice Executive President Andy Bennet during an audience with the Cameroon Prime Minister Philemon Yang. John Richter of the Richter International Trade Finance Consulting said, after the discussion with Yang, that the consortium has the "technical expertise and can bring direct foreign investment necessary to build the project to the benefit of Cameroon. Investors are seeking a 30-year operating lease and government aid in acquiring rights of way for the project, The Cameroon Tribune reported. Operação simulada de um projeto conceitual.