iPhone Dead Pixel Test. NAS. Finance. eBikes. HOWTO / Troubleshooting. Wii. The Iso Zone. What is svchost.exe And Why Is It Running? You are no doubt reading this article because you are wondering why on earth there are nearly a dozen processes running with the name svchost.exe. 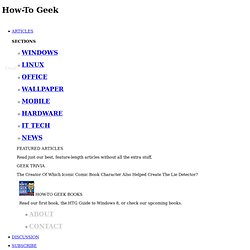 You can’t kill them, and you don’t remember starting them… so what are they? This article is part of our series explaining various processes found in Task Manager, including: jusched.exe, dwm.exe, ctfmon.exe, wmpnetwk.exe, wmpnscfg.exe, mDNSResponder.exe, conhost.exe, rundll32.exe, Dpupdchk.exe, and Adobe_Updater.exe. Do you know what those services are? Better start reading! So What Is It? According to Microsoft: “svchost.exe is a generic host process name for services that run from dynamic-link libraries”. Some time ago, Microsoft started moving all of the functionality from internal Windows services into .dll files instead of .exe files. Why Are There So Many svchost.exes Running? If you’ve ever taken a look at the Services section in control panel you might notice that there are a Lot of services required by Windows. 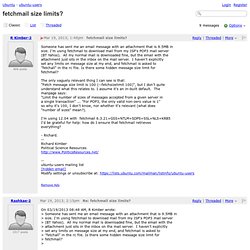 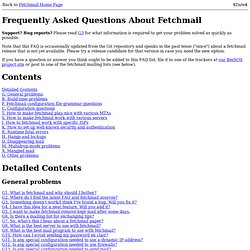 Bug reports? Please read G3 for what information is required to get your problem solved as quickly as possible. Note that this FAQ is occasionally updated from the Git repository and speaks in the past tense ("since") about a fetchmail release that is not yet available. Please try a release candidate for that version in case you need the new option. If you have a question or answer you think ought to be added to this FAQ list, file it to one of the trackers at our BerliOS project site or post to one of the fetchmail mailing lists (see below).

The EASY way to move your Microsoft Office 2011 for Mac license between computers. So, you have a new Mac with OSX and you’re excited to use it. 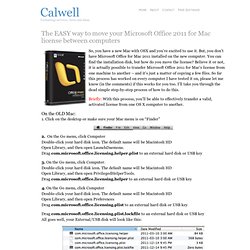 But, you don’t have Microsoft Office for Mac 2011 installed on the new computer. You can find the installation disk, but how do you move the license? Believe it or not, it is actually possible to transfer Microsoft Office 2011 for Mac’s license from one machine to another – and it’s just a matter of copying a few files. So far this process has worked on every computer I have tested it on, please let me know (in the comments) if this works for you too.

I’ll take you through the dead simple step-by-step process of how to do this. Briefly: With this process, you’ll be able to effectively transfer a valid, activated license from one OS X computer to another. Telnet Commands for a Thomson Router. Telnet Commands for a Thomson / Technicolor RouterTested on a TG587n V2 but may work on other Thomson routers Important Use the routers web interface to backup the router settings before playing. 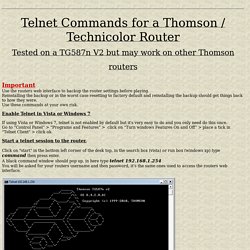 Reinstalling the backup or in the worst case resetting to factory default and reinstalling the backup should get things back to how they were. Use these commands at your own risk. Enable Telnet in Vista or Windows 7 If using Vista or Windows 7, telnet is not enabled by default but it's very easy to do and you only need do this once. Start a telnet session to the router. Click on "start" in the bottom left corner of the desk top, in the search box (vista) or run box (windows xp) type command then press enter. The first thing to do is disable the routers telnet timeout. Just enter the two commands as shown above to permanently disable the timeout. Telnet example This example displays the IP address of the DNS resolvers held in the router. 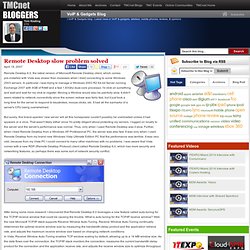 In particular, I was trying to manage a Windows 2003 R2 64-bit Server running Exchange 2007 with 4GB of RAM and a fast 1.83Ghz dual-core processor. I'd click on something and wait and wait for my click to register. Moving a Window would also be painfully slow. It didn't seem related to network connectivity since the screen redraw was fairly fast, but it just took a long time for the server to respond to keystrokes, mouse-clicks, etc. It had all the earmarks of a server's CPU being overwhelmed. But surely, this brand-spankin' new server will all this horsepower couldn't possibly be overloaded unless it had spyware or a virus. After doing some more research I discovered that Remote Desktop 6.0 leverages a new feature called auto-tuning for the TCP/IP receive window that could be causing the trouble.