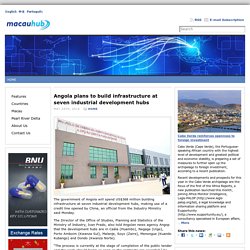 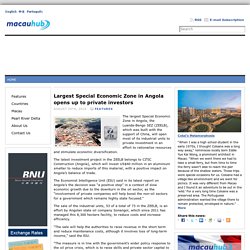 The latest investment project in the ZEELB belongs to CITIC Construction (Angola), which will invest US$40 million in an aluminium smelter to reduce imports of this material, with a positive impact on Angola’s balance of trade. The Economist Intelligence Unit (EIU) said in its latest report on Angola’s the decision was “a positive step” in a context of slow economic growth due to the downturn in the oil sector, as the “involvement of private companies will help boost the non-oil sectors for a government which remains highly state focused.” 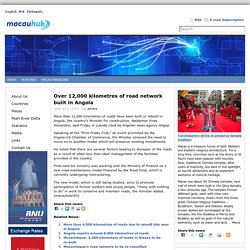 Speaking at the “First Friday Club,” an event promoted by the Angola-US Chamber of Commerce, the Minister stressed the need to move on to another model which will preserve existing investments. Angola Monitor - Over 1100 kilometers of roads recovered in 2014. Over 1100 kilometers of the primary road network were built or rebuilt in Angola this year, according to Carlos Santos, National Director of the Ministry of Construction Planning Office. 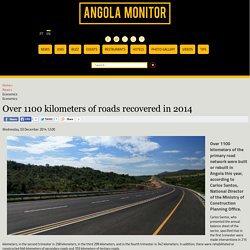 Carlos Santos, who presented the annual balance sheet of the sector, specified that in the first trimester were made interventions in 215 kilometers, in the second trimester in 258 kilometers, in the third 299 kilometers, and in the fourth trimester in 342 kilometers. In addition, there were rehabilitated or constructed 646 kilometers of secondary roads and 703 kilometers of tertiary roads. IJ_-_Rebuilding_Angolas_Infrastructure_150114.pdf. City of Ondjiva, Angola to have new airport in 2014. Construçao / Estradas Kuando Kubango. Construção / Cabinda Infraestruturas Integradas. Angolan government plans to repair 15,500 kilometres of main roads over five years. July 8th, 2013 News The Angolan government plans to repair 15,500 kilometres of its primary road network between 2013 and 2017, the Minister for Finance, Armando Manuel said Friday in Luanda. 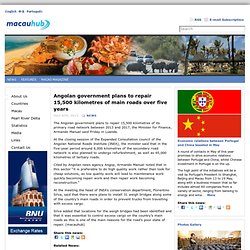 At the closing session of the Expanded Consultation council of the Angolan National Roads Institute (INEA), the minister said that in the five-year period around 6,000 kilometres of the secondary road network is also planned to undergo refurbishment, as well as 65,000 kilometres of tertiary roads. Cited by Angolan news agency Angop, Armando Manuel noted that in this sector “it is preferable to do high quality work rather than look for cheap solutions, as low quality work will lead to maintenance work quickly becoming repair work and then repair work becoming reconstruction.” Silva added that locations for the weigh bridges had been identified and that it was essential to control excess cargo on the country’s main roads as this is one of the main reasons for the road’s poor state of repair. Angolan National Roads Institute plans to rebuild 1,500 bridges in five years. May 6th, 2013 News The Angolan National Roads Institute plans to rebuild 1,500 bridges destroyed in the civil war and replace temporary bridges with permanent concrete ones, in the 2013-2017 period, said the Institute’s managing director. 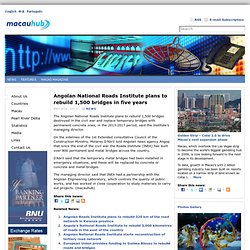 On the sidelines of the 1st Extended consultative Council of the Construction Ministry, Molares D’Abril told Angolan news agency Angop that since the end of the civil war the Roads Institute (INEA) has built over 800 permanent and metal bridges across the country. D’Abril said that the temporary metal bridges had been installed in emergency situations, and these will be replaced by concrete or concrete and metal bridges. The managing director said that INEA had a partnership with the Angolan Engineering Laboratory, which controls the quality of public works, and has worked in close cooperation to study materials to carry out projects. Related News: Angola Magazine - Projecto horizonte na provincia do Kwanza sul. Angola Magazine - Reconversão urbana. Benguela railroad in Angola soon to reach DR Congo border. February 14th, 2013 News Around 1,070 kilometres, or 80 percent of the total length of the railroad between the Angolan cities of Lobito and Luau have been built, the director of the Angolan National Railroad Institute, Júlio Bango said Wednesday. 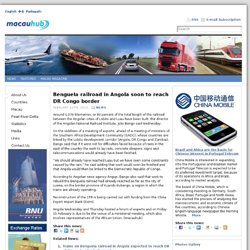 On the sidelines of a meeting of exports, ahead of a meeting of ministers of the Southern Africa Development Community (SADC), whose countries are linked by the Lobito development corridor (Angola, DR Congo and Zambia), Bango said that if it were not for difficulties faced because of rains in the east of the country the work to lay rails, concrete sleepers, signs and telecommunications would already have been finished. “We should already have reached Luau but we have seen some constraints caused by the rain,” he said adding that work would soon be finished and that Angola would then be linked to the Democratic Republic of Congo. 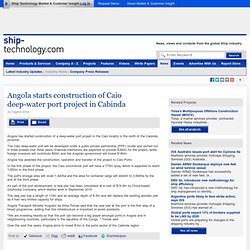 The Caio deep-water port will be developed under a public-private partnership (PPP) model and carried out in three phases over three years; financial institutions are expected to provide $360m for the project, while foreign investors will contribute $60m and the Angolan government will invest $180m. . Economics - Angola records infrastructures growth in last five years. New jetty in Cabinda, Angola, inaugurated Wednesday. June 19th, 2012 News The new jetty in the city of Cabinda is due to be inaugurated Wednesday, 10 June, as part of the programme to modernise port, airport, and rail facilities underway in Angola, the country’s Transport Minister, Augusto Tomás said Monday in Luanda. 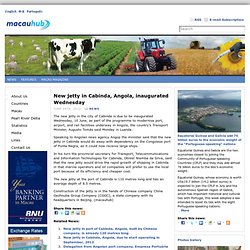 Speaking to Angolan news agency Angop the minister said that the new jetty in Cabinda would do away with dependency on the Congolese port of Ponta Negra, as it could now receive large ships. In his turn the provincial secretary for Transport, Telecommunications and Information Technologies for Cabinda, Otiniel Niemba da Silva, said that the new jetty would drive the rapid growth of shipping in Cabinda in that marine operators and oil companies will prefer to use the local port because of its efficiency and cheaper cost. The new jetty at the port of Cabinda is 110 metres long and has an average depth of 8.5 metres. Related News: