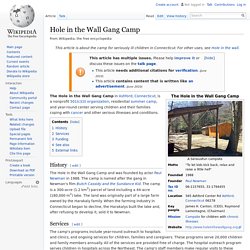 The camp is named after the gang in Newman's film Butch Cassidy and the Sundance Kid. The camp is a 300-acre (1.2 km2) parcel of land including a 44-acre (180,000 m2) lake. The land was originally part of a large farm owned by the Harakaly family. When the farming industry in Connecticut began to decline, the Harakalys built the lake and, after refusing to develop it, sold it to Newman. Services[edit] Toronto General Hospital. The emergency department now treats 28,065 persons each year, while the hospital also houses the major transplantation service for Ontario, performing heart, lung, kidney, liver, pancreas and small intestine, amongst others, for patients referred from all over Canada. 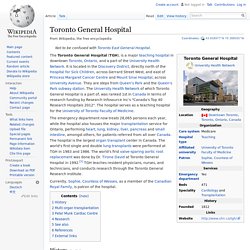 The hospital is the largest organ transplant center in Canada. The world's first single and double lung transplants were performed at TGH in 1983 and 1986. The world's first valve-sparing aortic root replacement was done by Dr. University of Texas MD Anderson Cancer Center. Location within Texas Medical Center The University of Texas MD Anderson Cancer Center (colloquially MD Anderson Cancer Center) is one of the original three comprehensive cancer centers in the United States established by the National Cancer Act of 1971.[1] It is both a degree-granting academic institution and a cancer treatment and research center located at the Texas Medical Center in Houston, Texas, United States. 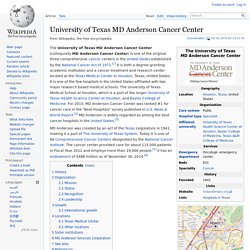 It is one of the few hospitals in the United States affiliated with two major research based medical schools: The University of Texas Medical School at Houston, which is a part of the larger University of Texas Health Science Center at Houston, and Baylor College of Medicine. For 2015, MD Anderson Cancer Center was ranked #1 for cancer care in the "Best Hospitals" survey published in U.S. News & World Report.[2] MD Anderson is widely regarded as among the best cancer hospitals in the United States.[3] Thomas Jefferson University Hospital. History[edit] Formed in 1825 as the Infirmary of the Jefferson Medical College the predecessor of the Hospital of Jefferson Medical College and then Jefferson University Hospitals, TJUH serves patients in Philadelphia, and the surrounding communities in the Delaware Valley including Southern New Jersey and Southeastern Pennsylvania. 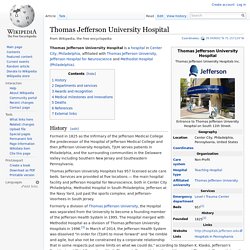 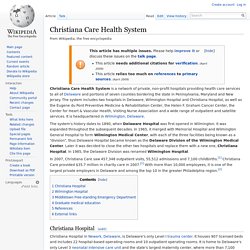 The system includes two hospitals in Delaware, Wilmington Hospital and Christiana Hospital, as well as the Eugene du Pont Preventive Medicine & Rehabilitation Center, the Helen F. Graham Cancer Center, the Center for Heart & Vascular Health, Visiting Nurse Association and a wide range of outpatient and satellite services. It is headquartered in Wilmington, Delaware. The system's history dates to 1890, when Delaware Hospital was first opened in Wilmington. It was expanded throughout the subsequent decades. Christiana Care Health System. Stanford Hospital and Clinics. Entrance to Stanford Hospital Stanford Hospital (now Stanford Health Care) is located at 300 Pasteur Drive, Stanford, California, 94305[1] and is part of the Stanford University Medical Center along with the Lucile Packard Children's Hospital and the Stanford School of Medicine. 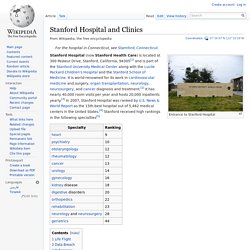 It is world-renowned for its work in cardiovascular medicine and surgery, organ transplantation, neurology, neurosurgery, and cancer diagnosis and treatment.[2] It has nearly 40,000 room visits per year and hosts 20,000 inpatients yearly.[3] In 2007, Stanford Hospital was ranked by U.S. News & World Report as the 15th-best hospital out of 5,462 medical centers in the United States.[4] Stanford received high rankings in the following specialties[5] Life Flight[edit] The Stanford Life Flight program began May 1, 1984. Data Breach[edit] Sanford Health. Sanford Health is a non-profit, integrated health care delivery system, with its headquarters based in Sioux Falls, South Dakota, with additional offices in Fargo, North Dakota. 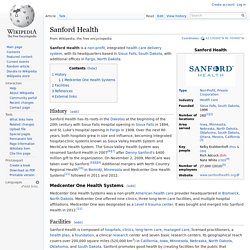 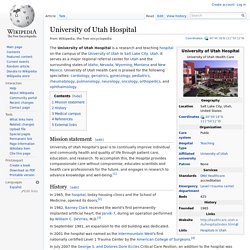 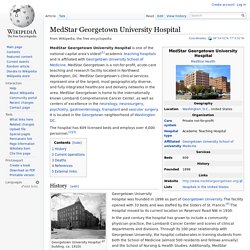 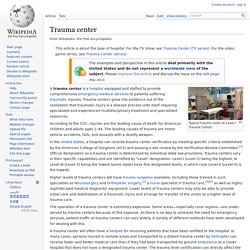 A trauma center is a hospital equipped and staffed to provide comprehensive emergency medical services to patients suffering traumatic injuries. Trauma centers grew into existence out of the realization that traumatic injury is a disease process unto itself requiring specialized and experienced multidisciplinary treatment and specialized resources. According to the CDC, injuries are the leading cause of death for American children and adults ages 1–44. The leading causes of trauma are motor vehicle accidents, falls, and assaults with a deadly weapon. In the United States, a hospital can receive trauma center verification by meeting specific criteria established by the American College of Surgeons (ACS) and passing a site review by the Verification Review Committee.[1] Official designation as a trauma center is determined by individual state law provisions.

The operation of a trauma center is extremely expensive. History[edit] Erasmus MC. The Erasmus University Medical Center (Erasmus MC) based in Rotterdam, Netherlands, affiliated with Erasmus University and home to its faculty of medicine, is the "largest and one of the most authoritative scientific University Medical Centers in Europe. "[1] With 1320 beds it is the second largest hospital of the Netherlands, only 19 beds behind UMC Groningen. [when?] The London Clinic. The London Clinic is a private healthcare organisation based in central London. Although it maintains several consulting rooms in the traditional doctors' street of Harley Street, the main hospital site is on the corner of Devonshire Place and the Marylebone Road.

One of its main buildings is the cancer centre, which provides diagnosis and treatment for all types of cancer. In addition The London Clinic Radiotherapy Department has developed state-of-the-art treatments with cyberknife and image-guided radiotherapy under its Director Professor Christopher Nutting. The London Clinic was established in 1932 by a group of Harley Street doctors.[1] The London Clinic is a registered charity in the United Kingdom.

The London Clinic is not currently surveyed and accredited by a recognised holistic international healthcare accreditation scheme.[4] See also[edit] Frimley Park Hospital. Frimley Park Hospital was formerly run by Frimley Park Hospital NHS Foundation Trust which took over Heatherwood and Wexham Park Hospitals NHS Foundation Trust in October 2014. It is a large, 720-bed NHS hospital in Frimley, Surrey. It is now part of Frimley Health NHS Foundation Trust. It opened in 1974 [1] to provide a full range of district general hospital services for North East Hampshire and West Surrey, a catchment population of about 365,000. Wikipedia rehabilitation centre. Royal Hospital Haslar. Coordinates: Founded in the reign of King George I, the Royal Hospital Haslar in Gosport, Hampshire, was one of several hospitals serving the Portsmouth Urban Area, but had previously been the country's foremost – and ultimately last – military hospital.

Its military status was withdrawn in 2007, and those military personnel remaining joined the Ministry of Defence Hospital Unit (MDHU Portsmouth) at Queen Alexandra Hospital in Cosham, Portsmouth. In the summer of 2009, all remaining (civilian) medical services at Haslar were relocated to the Queen Alexandra Hospital, and the site was subsequently sold. The Royal Military Hospital Haslar had a number of notable specialist medical facilities, including a decompression chamber and a zymotic isolation ward.

History[edit] The Royal Hospital Haslar was designed by Theodore Jacobsen and built between 1746 and 1761. Haslar was the biggest hospital – and the largest brick building – in England when it was constructed. Cedars-Sinai Medical Center. Cedars-Sinai Medical Center is a non-profit, tertiary 958-bed hospital and multi-specialty academic health science center located in Los Angeles, California.[1] Part of the Cedars-Sinai Health System, the hospital employs a staff of over 2,000 physicians and 10,000 employees.[2][3] A team of 2,000 volunteers and more than 40 community groups support a patient-base of over 16,000 people.[4] Over 350 residents and fellows participate in more than 60 graduate medical education programs.[5] Cedars-Sinai focuses on biomedical research and technologically advanced medical education—based on an interdisciplinary collaboration between physicians and clinical researchers.[6] The facility has research centers covering cardiovascular, genetics, gene therapy, gastroenterology, neuroscience, immunology, surgery, organ transplantation, stem cells, biomedical imaging and cancer—with more than 800 research projects underway (led by 230 Principal Investigators).[7][8] As of 2013, U.S.

Public hospital efficiency gains could save $1 billion a year.