Charity Salaries. Fundraising costs are not a measure of a charity's effectiveness. The Public Accounts Committee's (PAC) hearing on 7th March covering the Cup Trust and tax evasion highlighted the importance of public trust and confidence in charities and their principal regulator, the Charity Commission. 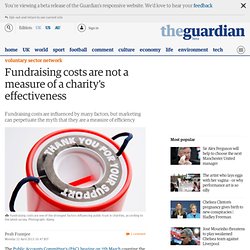 The latest public trust and confidence in charities survey published by the Charity Commission shows that the vast majority of the public have positive perceptions of charities' conduct and intentions. The TED talk everyone in the social sector is talking about – and what needs to change. Why NOT to use overhead ratios as a way to compare NGOs. 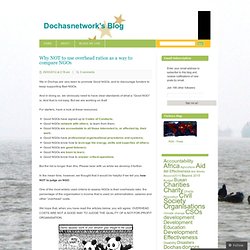 And in doing so, we obviously need to have clear standards of what a “Good NGO” is. And that is not easy. In defence of NGO overhead costs. 18/08/2010 at 6:51 am Graham Heaslip, a lecturer at NUI Maynooth, recently published an article in the Irish Times, attempting to clarify some of the challenges facing aid agencies. 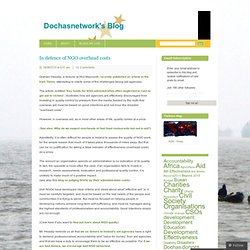 The article, entitled “Key funds for NGO administration often neglected in rush to get aid to victims“, illustrates how aid agencies are effectively discouraged from investing in quality control by pressure from the media, fuelled by the myth that overseas aid must be based on good intentions and not incur the dreaded “overhead costs”.

However, in overseas aid, as in most other areas of life, quality comes at a price. NGO overhead costs. 19/09/2011 at 11:41 am As the network of Irelands Development NGOs, we promote greater transparency and accountability among our members, and we bring NGOs together to exchange experiences and share examples of best practice. 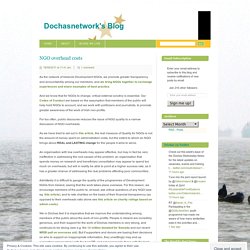 And we know that for NGOs to change, critical external scrutiny is essential. Identifying Effective NGOs. Might it be time to stop talking about NGO Administration Costs? 03/04/2012 at 4:15 pm Guest blog by Marguerite Hughes. 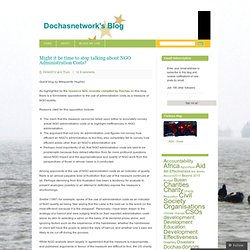 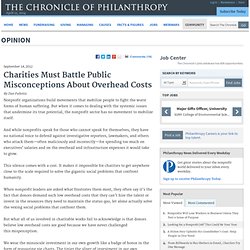 But when it comes to dealing with the systemic issues that undermine its true potential, the nonprofit sector has no movement to mobilize itself. And while nonprofits speak for those who cannot speak for themselves, they have no national voice to defend against investigative reporters, lawmakers, and others who attack them—often maliciously and incorrectly—for spending too much on executives’ salaries and on the overhead and infrastructure expenses it would take to grow. This silence comes with a cost. It makes it impossible for charities to get anywhere close to the scale required to solve the gigantic social problems that confront humanity. But what all of us involved in charitable works fail to acknowledge is that donors believe low overhead costs are good because we have never challenged this misperception. Letter to the Donors of America. The following letter to the donors of America was penned by the leaders of the country’s three leading sources of information on nonprofits – GuideStar, Charity Navigator, and BBB Wise Giving Alliance. 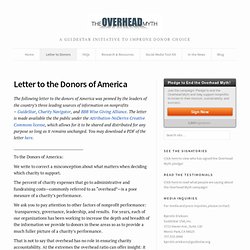 The letter is made available the the public under the Attribution-NoDerivs Creative Commons license, which allows for it to be shared and distributed for any purpose so long as it remains unchanged. You may download a PDF of the letter here. To the Donors of America: We write to correct a misconception about what matters when deciding which charity to support. The Overhead Myth. Five myths about charitable giving. It’s also astonishingly easy to start a charity. 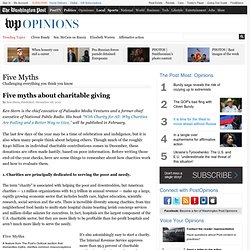 The Internal Revenue Service approves more than 99.5 percent of charitable applications, often in very short order. Because of this, the sector includes more than a few organizations that have little connection to common notions of doing good: the Sugar Bowl, the U.S. Golf Association, the Renegade Roller Derby team in Bend, Ore., and the All Colorado Beer Festival, just to name a few. 2. Donors should reward charities that have low overhead. The notion that charities should put as much money as possible into services and as little as possible into overhead expenses is widely accepted. How to stop donors asking about your administration costs. It's probably the most frequently asked question in the entire charity world. 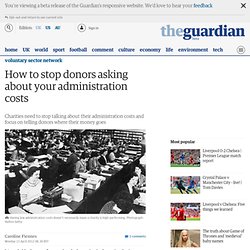 And yet as any charity knows, it's irrelevant. To see off the question about running costs, talk about something else. Charities must ensure society does not lose faith in them. Hard times for charities: A perfect storm or an opportunity? 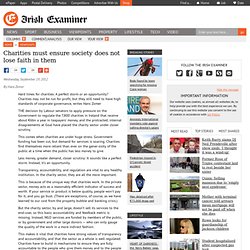 Charities may not be run for profit, but they still need to have high standards of corporate governance, writes Hans Zomer THE decision by Labour senators to apply pressure on the Government to regulate the 7,800 charities in Ireland that receive about €6bn a year in taxpayers’ money, and the protracted, internal disagreements at Goal have placed the charity sector under closer scrutiny. This comes when charities are under huge stress. Government funding has been cut, but demand for services is soaring. Charities find themselves more reliant than ever on the gener-osity of the public at a time when the public has less money to give. Less money, greater demand, closer scrutiny: It sounds like a perfect storm. Transparency, accountability, and regulation are vital to any healthy institution.

Charities should not have to reveal salaries of highest-paid staff, sector bodies say. By Beena Nadeem, Third Sector Online, 12 March 2014 Nick Brooks Charity and voluntary sector experts have warned against charities being made to reveal the salaries and job titles of their highest-paid employees in their accounts. The Charity Commission and the Office of the Scottish Charity Regulator have published all the responses not submitted in confidence to their consultation on an "exposure draft" of the new Statement of Recommended Practice. Under the existing rules, charities must disclose the salaries of employees earning more than £60,000 a year in bands of £10,000. Charities can't just expect the public's trust; they must earn it. Charities must be clear about the funding they receive, the money they spend, and the things they campaign for.

Photograph: Leigh Prather/Alamy NPC (New Philanthropy Capital) published a report last week entitled Mind the Gap: What the public thinks about charities. It revealed that a third of the public say their views towards charities have become more positive over the past three years, compared with a quarter who are now more negative. This is despite prominent negative media coverage of the charity sector, including executive salaries and concerns raised by some over our campaigning activity. Despite this positive news, this is not a time to be complacent. » On overhead ratios and why they (don’t) matter Good Karma (the blog) Overhead ratios: the amount of revenue that nonprofits spend on overhead expenses, as opposed to program expenses.

It’s (thought to be) an indication of efficiency, and, by extension, efficacy. This makes sense – surely the best organizations don’t spend money on superfluous administrative costs? Low overhead ratios mean great nonprofits, right? Wrong. Experts have been pointing out the fallacy of overhead ratios for years, and for good reason: they’re bunk. Imagine walking into Wendy’s or Burger King (or whatever fast food restaurant you frequent) and insisting that you will only pay for whatever is actually on your hamburger….

We would never expect a business to be successful without spending money on overheads, yet we expect aid organizations to work under exactly those conditions. What Saundra is getting at here is . Lies, White Lies, and Accounting Practices. So what if 90% of money donated goes to the program. Barnardo’s UK makes an active point of describing how low their overheads are. Whether it’s spending money on groceries, mobile phones or charities, we all want bang for our buck. Telling the public that a large percentage of their donations goes to the program is an easy way for an NGO to look like they’re doing the right thing.

However, in 2009, a joint press release from 8 charity-watchdog organisations stated that in trying to determine whether a charity is worth supporting, focusing on a low overhead ratio is meaningless. Survey: Charity Overhead Should Be 23% By Patrick Sullivan, The NonProfit Times The difference between what nonprofits should spend and what they actually do spend, is about 14 cents -- at least in the mind of the average person. The average American believes that a charity should spend no more than 23 percent on overhead but that charities actually spend 36.9 cents on the dollar. These were some of the findings in “Where’d My Money Go? ,” a survey by Phoenix, Ariz. -based Grey Matter Research & Consulting. One in five Americans, about 21 percent, believe that nonprofits spend 20 to 29 percent of donations on overhead.

In terms of what Americans think charities should spend administratively, 27 percent said it should be 10 to 19 cents of every dollar, and 24 percent believe it should be 20 to 29 cents. The survey, released Tuesday, is an update of a 2008 study of the same name. Only one thing surprised him: how similar the recent results were to 2008. Best / Worst Ways to pick a charity. How To Get Bang For Your Donation Buck.

The worst way to judge a charity. Donating to charity is a worthy action. But which charity? Cartoon. Donors Need a Better Way to Rate Charities - World View. Charity Ratings Based on Administration Costs can do More Harm Than Good. Q: Are overhead ratios the perfect measure of NPO efficiency and effectiveness? « Nonprofit update. A: No way. This is the conclusion of Saundra Schimmelpfennig in her e-book, Lies, White Lies, and Accounting Practices; Why nonprofit overhead doesn’t mean what you think it means. Fundraising costs are not a measure of a charity's effectiveness.