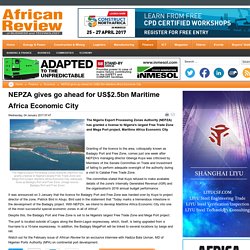 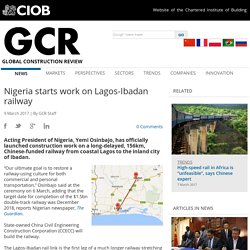 “Our ultimate goal is to restore a railway-using culture for both commercial and personal transportation,” Osinbajo said at the ceremony on 6 March, adding that the target date for completion of the $1.5bn double-track railway was December 2018, reports Nigerian newspaper, The Guardian. State-owned China Civil Engineering Construction Corporation (CCECC) will build the railway. Nigeria to establish new oil, gas free zone in Delta. Nigeria is to license a new oil and gas free zone in Delta state, the Managing Director, Oil and Gas Free Zones Authority, Umana Umana, said on Friday. 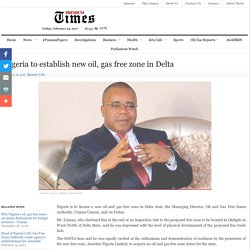 Mr. Nigeria: Govt Releases N72 Billion for Lagos-Ibadan Rail Line. By Sani Tukur The Federal Government of Nigeria has released N72 billion as its counterpart funding for the construction of the Lagos-Ibadan rail line. 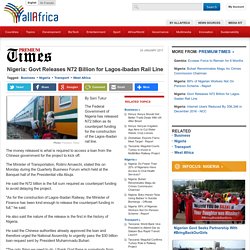 The money released is what is required to access a loan from the Chinese government for the project to kick off. The Minister of Transportation, Rotimi Amaechi, stated this on Monday during the Quarterly Business Forum which held at the Banquet hall of the Presidential villa Abuja. Network Africa: Nigeria Ramping Up Railway Investments. An Infrastructure Action Plan for Nigeria Closing the Infrastructure Gap and Accelerating Economic Transformation. Nigeria commences upgrade of airport facilities to check reduced flight visibility. The Nigerian Airspace Management Agency, NAMA, said airport authorities have commenced upgrading of existing facilities including the deployment of new communication, navigation, surveillance and air traffic management systems. 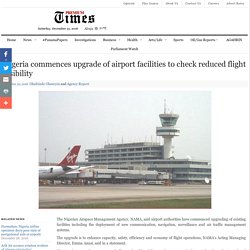 The upgrade is to enhance capacity, safety, efficiency and economy of flight operations, NAMA’s Acting Managing Director, Emma Anasi, said in a statement. Mr. Anasi expressed concern over challenges faced by airlines and passengers in the past few days, due to reduced flight visibility at the airports. He said the present weather condition was caused by the prevailing harmattan dust haze, which had limited operations into most airports.

According to him, the agency is not unmindful of the economic losses to airlines, passengers and other airport stakeholders. He, however, said that the primary responsibility of NAMA was to ensure the safety of lives and properties. Mr. Kano awards N167.5b for Kanawa economic city construction — Business — The Guardian Nigeria. Abdullahi Umar Ganduje The Kano State Government has signed a N167. 508 billion agreements with an indigenous company, Brian and Hammers Ltd., for the construction of Kanawa Economic City, situated at Dangwauro in the outskirts of the state capital. 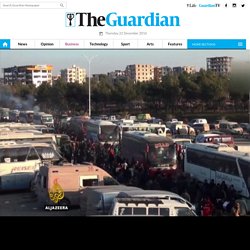 The project, which will be executed in 72 months, will be cascaded in three phases and will accommodate a world Trade Centre, Educational Institute, Light factories, 160 mega warehousing facilities, banks, a clinic and trailer parks in addition to other auxiliary infrastructure. Kano State Govt. signs $1.8bn light rail contract with Chinese firm‎ The Kano State Government has signed contracts valued at 1.8 billion dollars with China Railway Construction Group C18 for the construction of light rail line in the state.‎ ‎ 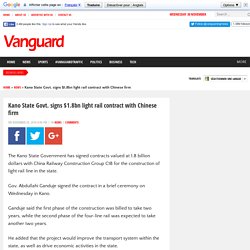 Gov. Abdullahi Ganduje signed the contract in a brief ceremony on Wednesday in Kano. Construction Of Africa's Largest Port Begins. Construction of Africa’s largest port located in the Badagry area of Lagos has begun by a joint partnership between the integrated Logistics Services, (INTELS) and the Nigerian Ports Authority, NPA. 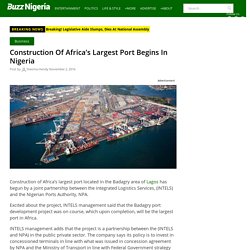 Excited about the project, INTELS management said that the Badagry port development project was on course, which upon completion, will be the largest port in Africa. Nigeria: 66 Million Citizens Lack Access to Safe Water - Vice President. By Hussein Yahaya Vice President Yemi Osinbajo yesterday said recent statistics have shown that over 66 million Nigerians still lack access to safe water, while 110 million do not have access to adequate sanitation. 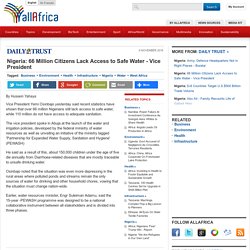 The vice president spoke in Abuja at the launch of the water and irrigation policies, developed by the federal ministry of water resources as well as unveiling an initiative of the ministry tagged 'Partnership for Expanded Water Supply, Sanitation and Hygiene' (PEWASH) He said as a result of this, about 150,000 children under the age of five die annually from Diarrhoea-related diseases that are mostly traceable to unsafe drinking water. Osinbajo noted that the situation was even more depressing in the rural areas where polluted ponds and streams remain the only sources of water for drinking and other household chores, vowing that the situation must change nation-wide. 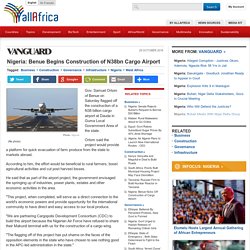 Samuel Ortom of Benue on Saturday flagged off the construction of a N38 billion cargo airport at Dauda in Guma Local Government Area of the state. Ortom said the project would provide a platform for quick evacuation of farm produce from the state to markets abroad. According to him, the effort would be beneficial to rural farmers, boost agricultural activities and cut post harvest losses. He said that as part of the airport project, the government envisaged the springing up of industries, power plants, estates and other economic activities in the area. "This project, when completed, will serve as a direct connection to the world's economic powers and provide opportunity for the international community to have direct and easy access to our local produce.

$10bln infrastructure programme launched in restive Nigeria delta. Konga rolls out warehousing infrastructure project across Nigeria » TODAY.ng. Konga, one of Nigeria’s online shopping mall, is rolling out an extensive warehouse infrastructure project across Nigeria to service thousands more online merchants, it announces today. ‘Fulfilled by Konga’ will enable thousands of Nigerian online sellers, who currently sell through Konga, to store their merchandise in Konga warehouses and subsequently have the orders delivered by Konga’s in-house fulfilment team.

The new initiative is set to reduce merchant order processing times from 40hours to 3hours – 90% reduction. ‘Fulfilled by Konga’ has been introduced to significantly reduce delivery times for customers across the country, and to make order fulfilment for its 60,000 merchants easier and more reliable. At present, merchants have up to three days to drop off their items at a distribution site, where Konga’s team will go on to deliver the item on their behalf.

With today’s news, items can be selected and shipped on the same day. Nigeria: FG Completes Galma Dam, Targets 1.1m Jobs. By Hussein Yahaya The Minister of Water Resources, Engr. Suleiman H. Adamu, has said that the completed Galma multipurpose dam in Soba Local Government Area of Kaduna State was capable of providing job opportunities for over 1.1 million people living within its environs. The building of the dam started in 2006, it was gathered. Adamu, who inspected the project, said apart from the irrigation component, the multipurpose dam with a reservoir capacity of about 186 million cubic metre of water could also generate 2.2 megawatt of electricity and supply water to 2.2 million people in the surrounding communities up to the city of Zaria. Nigeria: Relieving Traffic in Lagos - Spatial Reorganization Needed.

The Minister of Transportation, Mr Rotimi Amaechi, has given an assurance that the Calabar-Port Harcourt Coastal rail line and the Lagos-Kano rail modernisation project would be completed before the end of 2018. Amaechi said this on Wednesday in Abuja while signing the Memorandum of Understanding (MoU) for the project with a Chinese company, China Civil Engineering Construction Corporation Ltd. (CECC). The minister said the MoU was being signed in compliance with the China Exim Bank requirement. Nigeria: FG Dumps N398 Trillion Infrastructure Master Plan. By Francis Arinze Iloani. Concrete Roads 20% Cheaper Than Bitumen, More Durable – Dangote. The president of Dangote Group, Alhaji Aliko Dangote yesterday said using concrete in road construction is 20 percent less costly than using other materials. Nigeria to grant 30% tax reduction for entities and persons investing in infrastructure - Ecofin Agency. (Ecofin Agency) - Corporate and individual entities that invest in public infrastructure projects in Nigeria now benefit from a tax reduction, Nigerian minister of energy, public works and housing, Babatunde Fashola told local press.