How the internet flips elections and alters our thoughts. Over the past century, more than a few great writers have expressed concern about humanity’s future. 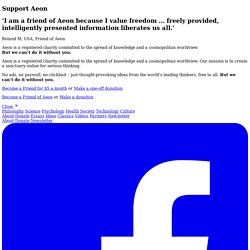 The internet as an engine of liberation is an innocent fraud. It was a scene out of an Ambien nightmare: a jackal with the face of Mark Zuckerberg stood over a freshly killed zebra, gnawing at the animal’s innards. 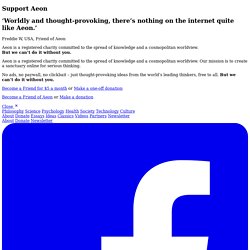 But I was not asleep. The vision arrived midday, triggered by the Facebook founder’s announcement – in spring 2011 – that ‘The only meat I’m eating is from animals I’ve killed myself.’ Zuckerberg had begun his new ‘personal challenge’, he told Fortune magazine, by boiling a lobster alive. Then he dispatched a chicken. How the internet was invented. In the kingdom of apps and unicorns, Rossotti’s is a rarity. 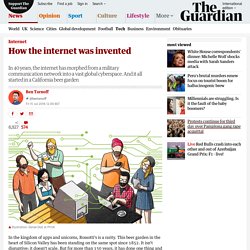 This beer garden in the heart of Silicon Valley has been standing on the same spot since 1852. It isn’t disruptive; it doesn’t scale. But for more than 150 years, it has done one thing and done it well: it has given Californians a good place to get drunk. The Internet And Its Discontents. Arthur ChuCrunch Network Contributor Arthur Chu is a lifelong geek who catapulted into notoriety in 2014 for "hacking" the game show Jeopardy! 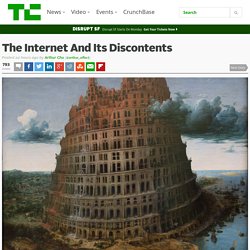 And has been commenting about nerd culture in the digital age ever since. Schokkend: volg hier live alle cyberaanvallen. The Future Of The Web Is All About Context. Imagine a world where search engines proactively send recommended articles, people and companies to their users — and all of these recommendations are extremely helpful and relevant. 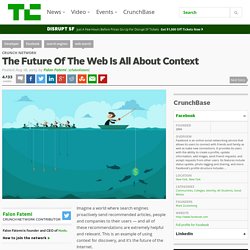 This is an example of using context for discovery, and it’s the future of the Internet. Unfortunately, today’s search engines aren’t mind readers. Not even close. It’s not until the user begins typing the information they’re looking for that the search engine begins to “think.” Dit bedrijf beheert het telefoonboek van het internet (maar van wie is het internet eigenlijk?) The Web We Have to Save — Matter. It had all started with 9/11. 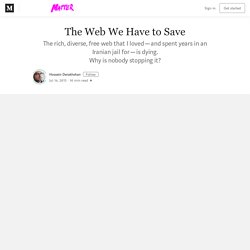 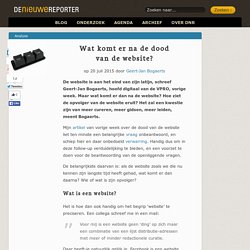 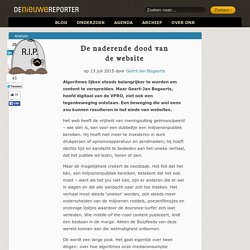 Maar de mogelijkheid creëert de noodzaak. How the Web Became Our ‘External Brain,’ and What It Means for Our Kids. Recently, my two-year-old nephew Benjamin came across a copy of Vanity Fair abandoned on the floor. 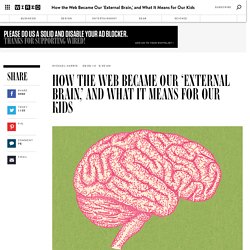 His eyes scanned the glossy cover, which shone less fiercely than the iPad he is used to but had a faint luster of its own. I watched his pudgy thumb and index finger pinch together and spread apart on Bradley Cooper’s smiling mug. At last, Benjamin looked over at me, flummoxed and frustrated, as though to say, “This thing’s broken.” Search YouTube for “baby” and “iPad” and you’ll find clips featuring one-year-olds attempting to manipulate magazine pages and television screens as though they were touch-sensitive displays. As we may understand. We’re heading into a world of increasingly complex engineered systems in everyday life, from smart cities, smart electricity grids and networked infrastructure on the one hand, to ourselves, personally, being always connected to each other: it’s not going to be just an Internet of Things, but very much an Internet of Things and People, and Communities, too. 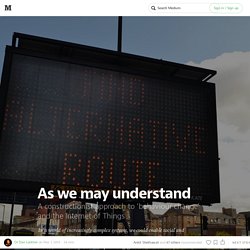 Yet there is a disconnect between the potential quality of life benefits for society, and people’s understanding of these — often invisible — systems around us. How do they work? Who runs them? What can they help me do? How can they help my community? IoT technology and the ecosystems around it could enable behaviour change for social and environmental sustainability in a wide range of areas, from energy use to civic engagement and empowerment. Understanding things. We need an internet that leaves space in our heads to enjoy creative peace.

I was sitting on my own in the room I had for the week, looking out over a steep Spanish hillside of almond blossom and holm oak and olive trees. It was sunny but cold, and I sat at the table with a large cup of tea and a blanket over my legs. Beside me lay a broken internet router. It was very, very quiet. No TV, no music, no radio, no children. Het internet of things wordt een grote beïnvloedingsmachine. ​dronebezorging Waarom gebeurde dit? Een algoritme dat al jouw communicatie en die van je vrienden analyseert wist dat je alleen was. En uit je facebookposts was op te maken dat je naar de film wilde, maar dat niemand tijd had. Sentimentanalyse van je tweets wees erop dat je een beetje verdrietig was en jezelf eenzaam voelde. Je slimme koelkast wist dat je geen boerenkool meer had. Can the Internet Be Archived? - The New Yorker. Malaysia Airlines Flight 17 took off from Amsterdam at 10:31 A.M.

G.M.T. on July 17, 2014, for a twelve-hour flight to Kuala Lumpur. Not much more than three hours later, the plane, a Boeing 777, crashed in a field outside Donetsk, Ukraine. All two hundred and ninety-eight people on board were killed. The plane’s last radio contact was at 1:20 P.M. The reluctant king of the hidden internet – Henry Farrell. The Hidden Wiki holds the keys to a secret internet. To reach it, you need a special browser that can access ‘Tor Hidden Services’ – websites that have chosen to obscure their physical location. But even this browser isn’t enough. Like the Isla de Muerta in the film Pirates of the Caribbean, the landmarks of this hidden internet can be discovered only by those who already know where they are. Sites such as the Hidden Wiki provide unreliable treasure maps. They publish lists of the special addresses for sites where you can use Bitcoin to buy drugs or stolen credit card numbers, play strange games, or simply talk, perhaps on subjects too delicate for the open web.

Popular now. Het internet, de mening en de Oude Grieken » Door: Xaviera Ringeling - /via @42bis. ​The Future of the Web Is as Much About Psychology as Technology. Even the most forward-thinking futurist would find it near-impossible to imagine with any great confidence what the World Wide Web will look like in 2050. Thirty-five years into the future seems like an unfathomably long view when technology is advancing at various exponential rates. Only 25 years ago, the web didn’t exist at all.

That’s the task a group of delegates from various tech companies (plus a token futurist in the form of Book of the Future’s Tom Cheesewright) set themselves to at a roundtable discussion in London this morning. The event was a precursor to the IP Expo Europe next month, at which web creator Sir Tim Berners-Lee will share some of his own thoughts on the matter. Dan Simmons from BBC Click, who chaired the discussion, attempted to set the scene for a potential vision of technology in 2050.

Human beings are not very good at open-endedness; we like to compartmentalise things into small chunks. Of course, that’s already a problem here in 2014. Fix the internet. The Creepy New Wave of the Internet by Sue Halpern. The Zero Marginal Cost Society: The Internet of Things, the Collaborative Commons, and the Eclipse of Capitalism by Jeremy Rifkin Palgrave Macmillan, 356 pp., $28.00 Enchanted Objects: Design, Human Desire, and the Internet of Things by David Rose Scribner, 304 pp., $28.00.

But there are also sites that don't rely on Tor, such as password-protected forums where hackers trade secrets and stolen credit card numbers, that can also be considered part of the dark web. People use the dark web for a variety of purposes: buying and selling drugs, discussing hacking techniques and selling hacking services, trading child pornography, and so forth. De donkere kant van het web. Everything Is Broken — The Message. Then there’s the Intelligence Community, who call themselves the IC. We might like it if they stopped spying on everyone all the time, while they would like us to stop whining about it. After spending some time with them, I am pretty sure I understand why they don’t care about the complaining. The IC are some of the most surveilled humans in history. They know everything they do is gone over with a fine-toothed comb — by their peers, their bosses, their lawyers, other agencies, the president, and sometimes Congress.

How the web lost its way – and its founding principles. In 2009, an American civil rights lawyer created a mashup mapping a neighbourhood called Coal Run, Ohio. It showed which houses were connected to the town's water supply and which houses were occupied by black or white families. Rebuilding the Web We Lost. How We Lost the Web. The Web We Lost. The Internet as we know it is dying. It was a week of rage, nostalgia and despair on the Internet. Sure, you could say that about any week on the Internet. But last week delivered some prime material. The internet is fucked. In a perfect storm of corporate greed and broken government, the internet has gone from vibrant center of the new economy to burgeoning tool of economic control.

The Internet's Original Sin. Je tiener op het web en de afkortingen. Web History Timeline. Is Google Making Us Stupid? The population of the internet, in one map. 100 Ideas That Changed the Web. 40 maps that explain the internet. The 10 best words the internet has given English.

10 Rules of Internet. We are data: the future of machine intelligence. The Art of Staying Focused in a Distracting World. Ghosts in the machines. Internet of things: the greatest mass surveillance infrastructure ever?