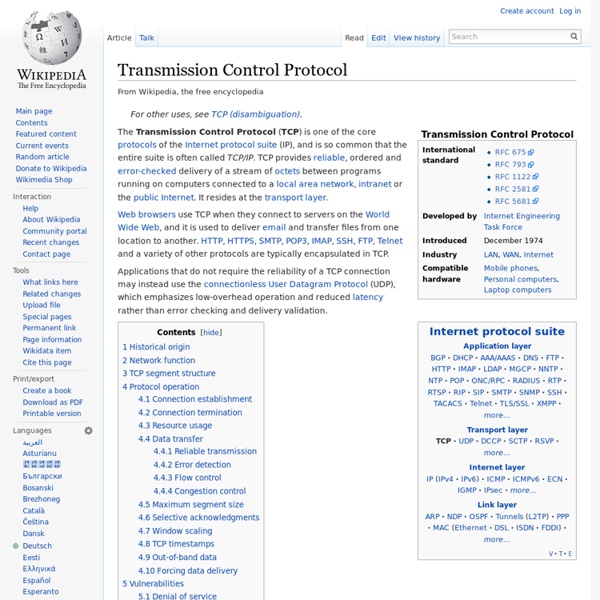 Web browsers use TCP when they connect to servers on the World Wide Web, and it is used to deliver email and transfer files from one location to another. HTTP, HTTPS, SMTP, POP3, IMAP, SSH, FTP, Telnet and a variety of other protocols are typically encapsulated in TCP. Historical origin[edit] In May 1974 the Institute of Electrical and Electronic Engineers (IEEE) published a paper titled "A Protocol for Packet Network Intercommunication Network function[edit] The protocol corresponds to the transport layer of TCP/IP suite. TCP is utilized extensively by many of the Internet's most popular applications, including the World Wide Web (WWW), E-mail, File Transfer Protocol, Secure Shell, peer-to-peer file sharing, and some streaming media applications. TCP is optimized for accurate delivery rather than timely delivery, and therefore, TCP sometimes incurs relatively long delays (on the order of seconds) while waiting for out-of-order messages or retransmissions of lost messages. Reserved (3 bits) Related:  Infrastructure internet

Hypertext Transfer Protocol The Hypertext Transfer Protocol (HTTP) is an application protocol for distributed, collaborative, hypermedia information systems.[1] HTTP is the foundation of data communication for the World Wide Web. The standards development of HTTP was coordinated by the Internet Engineering Task Force (IETF) and the World Wide Web Consortium (W3C), culminating in the publication of a series of Requests for Comments (RFCs), most notably RFC 2616 (June 1999), which defined HTTP/1.1, the version of HTTP most commonly used today. In June 2014, RFC 2616 was retired and HTTP/1.1 was redefined by RFCs 7230, 7231, 7232, 7233, 7234, and 7235.[2] HTTP/2 is currently in draft form. Technical overview[edit] URL beginning with the HTTP scheme and the WWW domain name label. A web browser is an example of a user agent (UA). HTTP is designed to permit intermediate network elements to improve or enable communications between clients and servers. History[edit] The first documented version of HTTP was HTTP V0.9 (1991).

Daily | Mises Institute Libertarians often cite the internet as a case in point that liberty is the mother of innovation. Opponents quickly counter that the internet was a government program, proving once again that markets must be guided by the steady hand of the state. In one sense the critics are correct, though not in ways they understand. The internet indeed began as a typical government program, the ARPANET, designed to share mainframe computing power and to establish a secure military communications network. Of course the designers could not have foreseen what the (commercial) internet has become. In fact, the role of the government in the creation of the internet is often understated. The internet owes its very existence to the state and to state funding. During the 1960s, the RAND Corporation had begun to think about how to design a military communications network that would be invulnerable to a nuclear attack. By 1972, the number of host computers connected to the ARPANET had increased to 37.

Did Al Gore Claim He Invented the Internet? Claim: Vice-President Al Gore claimed during a news interview that he "invented" the Internet. Origins: Despite the derisive references that continue even today, former Vice-President Al Gore never claimed that he "invented" the Internet, nor did he say anything that could reasonably be interpreted that way. The "Al Gore said he 'invented' the Internet" put-downs were misleading, out-of-context distortions of something he said during an interview with Wolf Blitzer on CNN's "Late Edition" program on 1999. When asked to describe what distinguished him from his challenger for the Democratic presidential nomination, Senator Bill Bradley of New Jersey, Gore replied (in part): During my service in the United States Congress, I took the initiative in creating the Internet. Al Gore was the first political leader to recognize the importance of the Internet and to promote and support its development. No one person or even small group of persons exclusively "invented" the Internet.

How Government Did (and Didn't) Invent the Internet Last night, I happened across an article by Slate technology scribe Farhad Manjoo. He was responding to an opinion piece in the Wall Street Journal by the Journal’s former publisher Gordon Crovitz. And when Manjoo explained just what Crovitz was opining about, I felt my jaw drop to the floor as if I were a character in a 1940s cartoon. Crovitz, apparently riled up over Barack Obama’s “you didn’t build that” kerfuffle, has an example of something that the government is widely misperceived to have built: the Internet. He actually says, “It’s an urban legend that the government launched the Internet.” As Manjoo points out, Crovitz’s argument — which rests largely on his contention that the Internet was really created at Xerox’s legendary PARC lab — is bizarrely, definitively false. Also factual: DARPA was where Robert Kahn and Vint Cerf invented TCP/IP, the plumbing that makes the Internet possible. (Crovitz, incidentally, credits Berners-Lee for the hyperlink.