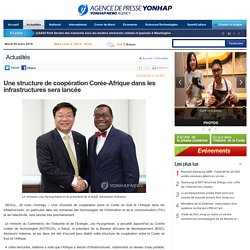 Yoshizawa e. Japan eyes Africa port and infrastructure investments. Africa: Omantel Tapping Into Africa With Construction of G2a Cable Through Somalia, Ethiopia. By Baraka Jefwa Omantel, the national operator of Oman, announced the signing of the supply agreement with Xtera Communications, for building a submarine cable dubbed 'Gulf to Africa (G2A)' that will be a direct highway from Salalah in Oman to Bosaso in Puntland and Berbera in Somaliland, with a terrestrial extension to Addis Ababa in Ethiopia. 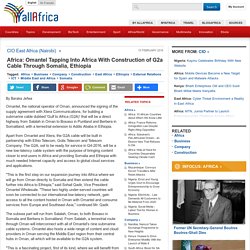 Emirates wins Uganda bridge contract. Top Dubai tycoon to build second Al Habtoor City in Egypt - Construction. One of Dubai's top businessman has revealed plans to build a huge mixed-use development in Cairo, based on a similar project currently being built in the emirate. 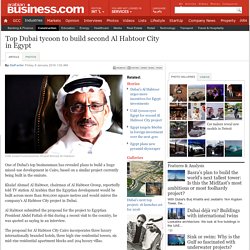 The development will also include an international school, two polo fields, a golf course and a shopping complex. “It would be a vibrant community in the heart of the city and a new landmark in Cairo. Gulf secures multi-billion dollar West African projects. Embu near Nairobi signs Sh3.8 billion road project contract with Malaysian company. The Embu government has signed a Sh3.8 billion contract with a Malaysian company to tarmack county roads. 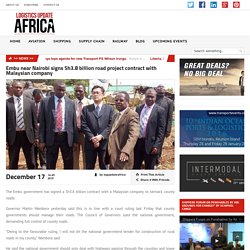 Governor Martin Wambora yesterday said this is in line with a court ruling last Friday that county governments should manage their roads. The Council of Governors sued the national government, demanding full control of county roads. “Owing to the favourable ruling, I will not let the national government tender for construction of rural roads in my county,” Wambora said. He said the national government should only deal with highways passing through the counties and leave interior roads to the counties. Wambora urged the Kenya Rural Roads and Kenya Urban Roads authorities to hand over all the funds they had set aside for construction and maintenance of rural roads in Embu. JICA`s Regional Infrastructure Development in Africa. DP World report criticises pace of African infrastructure investment. DP World has published a report which calls for more investment in both ‘soft’ and ‘hard’ infrastructure in Sub-Saharan Africa. 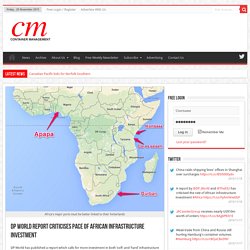 According to the World Economic Forum’s 2015 survey of investors, “inadequate supply of infrastructure” was considered the third biggest obstacle to doing business in Africa, after “access to finance” and “corruption”. DP World’s report, which was prepared by the Economist Intelligence Unit and presented at the Africa Global Business Forum, said that infrastructure development in Sub-Saharan Africa has slowed since 2009. In Southeast Asia, Latin America and the Caribbean on the other hand, infrastructure development has continued to catch up with advanced economies. Africa’s port infrastructure is poor quality, the report found. Abu Dhabi in discussions to build new airport in Seychelles. Abu Dhabi Airports Company (Adac) is in talks to build a new airport in the Seychelles as the UAE strengthens its commercial ties with the country. 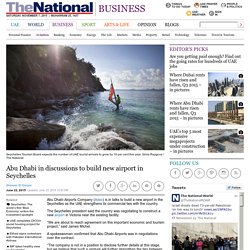 The Seychelles president said the country was negotiating to construct a new airport in Victoria near the existing facility. “We are about to reach agreement on this important economic and tourism project,” said James Michel. A spokeswoman confirmed that Abu Dhabi Airports was in negotiations over the contract. “The company is not in a position to disclose further details at this stage, but we believe that such a venture will further strengthen the ties between the government of Abu Dhabi and the Republic of Seychelles,” she said. Arab Maghreb Union: Overcoming Competition in Favor of Cooperation (Part I) [This article is the first in a two-part Jadaliyya series on the Arab Maghreb Union.] 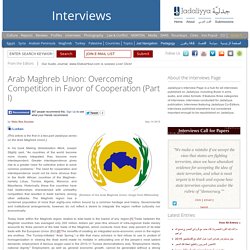 In his book Making Globalization Work, Joseph Stiglitz said, “As countries of the world become more closely integrated, they become more interdependent. Greater interdependence gives rise to a greater need for collective action to solve common problems.” Japan bankrolls Mozambique's Nacala port development. The Japan International Cooperation Agency (JICA) will provide US$250 million for the second phase of the development project for the northern Mozambican port of Nacala that is expected to raise cargo handling capacity to 16 million tonnes of cargo by 2030 from 1.5 million tonnes, APA has learnt.Mozambique’s Minister of Economy and finance Adriano Maleiane said the funding was an enormous lever for the advancement of the undertaking and would spur the growth of the Mozambican economy at the same time it would benefit not only Mozambique, but also other countries of the region. 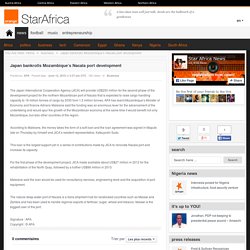 Surbana International Consultants was appointed today as the master planner for Kinshasa, the capital and largest city of the Democratic Republic of the Congo. 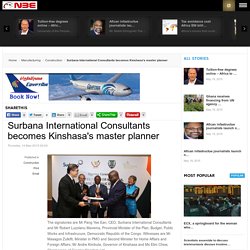 Agência de Notícias Brasil-Árabe. The cash will be spent on a project to be built around Tunis, the capital. 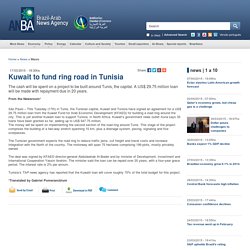 A US$ 29.75 million loan will be made with repayment due in 20 years. São Paulo – This Tuesday (17th) in Tunis, the Tunisian capital, Kuwait and Tunisia have signed an agreement for a US$ 29.75 million loan from the Kuwait Fund for Arab Economic Development (KFAED) for building a road ring around the city. This is yet another Kuwaiti loan to support Tunisia, in North Africa. Kuwait’s government news outlet Kuna says 33 loans have been granted so far, adding up to US$ 547.75 million. The money will be spent on implementing the second section of the road ring around Tunis. Thailand to sell stake in gas pipeline project in Egypt. Egyptian gas pipeline (photo: rebeleconomy) Thailand’s state-owned company, PPT is seeking to sell 25 percent stake in the Egyptian East Mediterranean Gas company. “We are looking at an option to sell the stake. Jindal Steel to invest US$500mn in Cameroon’s power and rail sector. Kenya, Japan sign Sh25bn Mombasa port deal.

Aerial view of Mombasa container port Kenya and Japan on Friday signed a Sh24.6bn ($270 million) loan deal to finance the second phase of Mombasa port expansion. The funds, which will be granted through the Japan Bank for International Corporation (JBIC), will be used to establish a new container terminal by rehabilitation of West Kipevu to create three extra berths. Phase two of the Mombasa port expansion project includes construction of a new port access road connecting the new container terminal with the existing Port Reitz Road that leads to Nairobi and inland bound highways. The new access road is expected to have a capacity of 750,000 twenty foot equivalent units (TEUs) per year. A new railway station with four rail lines mounted with gantry cranes will also be established.

The project will also include the expansion of Port Reitz and Airport roads and drenching of access channel connecting the new terminal and open sea. Indian firm wins US$79.2mn transport projects in Africa. Ashok Leyland is the second largest commercial vehicle manufacturer in India and the fourth largest manufacturer of buses in the world. (Image source: Ashok Leyland) As part of the transport project, the company will supply trucks, buses, light commercial vehicles, spares and allied support services, includes training and developmental consultancy, Ashok Leyland said. The company will also address a variety of mobility requirements in various tourism and economic development programmes, it added. Vinod K Dasari, MD of Ashok Leyland, said, “These projects are a continuation of the many pilot projects we have done across Africa to offer integrated solutions and these orders have been won in the face of stiff global competition.

" Dasari added that the company had made a conscious effort to provide thrust to its international operations and Africa is a very important part of this strategy. New Telegraph – Singapore experts eye Nigeria, Africa for urban planning. Having successfully designed Singapore’s distinctive skyline and building more than one million homes, Surbana International Consultants are targeting Nigeria and other African cities for modern urban cities designs.

African cities are the second most unequal in the world, according to the African Development Bank (AfDB). Justifying the company’s intention, Chief Executive Officer of Surbana, Pang Yee Ean, said that most African cities have developed organically and haphazardly, with little attention to centralised planning, infrastructure updates or zoning. Consequently, Surbana’s managing director for city management and its Africa portfolio, Mr Louis Tay, told newsmen that the company intend to be in Nigeria to help in the planning of its cities. He added that African countries such as Mozambique, Tanzania are also to be explored. Chief Executive Officer of Surbana, Pang Yee Ean, said the company has helped to shape the Singapore’s unique approach to housing and social policy. Malaysian firms stepping up infrastructure investment in Africa. Foreign direct investment (FDI) from Malaysia to Africa increased 4% to $57 billion in 2013 driven by infrastructure investments, especially in the Eastern and Southern Africa sub-regions, MIDA’s second deputy chief executive officer N S Rajendran told the National News Agency of Malaysia (Bernama).

FDI inflows into Southern Africa almost doubled to $13bn over the same period, while investment in Eastern Africa grew 15% to $6.2bn, Rajendran said. “This shows that Africa is continuing to sustain its economic and population growth and will definitely attract market-seeking FDI into consumer-oriented industries,” he said. Rajendran, who was interviewed on the sidelines of Malaysia’s Third Country Training Programme investment promotion (TCTP) for African Countries on 23 September in Kuala Lumpur, said electronics, consumer products and machinery equipment for agriculture “are some of the potential areas that we can tap into”.

Omani firm to invest USD700m in Cote d'Ivoire dry port projectOman. Abu Dhabi firm secures US$16 bil. in West African infrastructure projects. Daewoo Wins Bridge Project Connecting Zambia and Botswana. The groundbreaking is scheduled for next month and the construction is supposed to be completed within four years. Abu Dhabi pumps $100 million grant on Ghana's instrastructure. TVC NEWS [ACCRA]- The Abu Dhabi Development Fund has splashed a grant of $100 million to the government of Ghana to undertake infrastructural development. TVC NEWS Eunice Agyare reports that the grant was announced when during the visit of the Deputy Minister of Economic Affairs of the United Arab Emirates (UAE), Sheikh Al Gaith, and some investors from the oil-rich country paid a courtesy call on the President John Dramani Mahama, at the Presidential Villa at Akosombo on Wednesday.