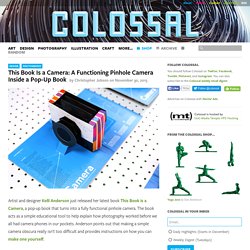 The book acts as a simple educational tool to help explain how photography worked before we all had camera phones in our pockets. Anderson points out that making a simple camera obscura really isn’t too difficult and provides instructions on how you can make one yourself. This Book is a Camera comes complete with a starter pack of B/W Ilford photo paper and instructions on how to use the camera to take photos. You’ll still need to pick up some developer fluid and have a dark room to develop photos in. Best strategy games on PC. Best strategy games on PC PC Gamer May 7, 2015 27k. 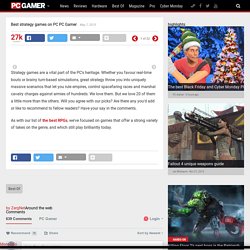 Rainmeter, desktop customization tool. Photographer Finds Cultural Identity in Japan Through Stunning Images. While Reylia Slaby would be technically classified as Caucasian, she was born and raised in Japan, and thus naturally, the foreign country is her home. 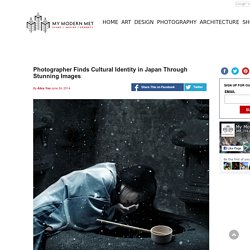 Over the past few years she has been struggling with finding her identity saying, "While I had a lot to be thankful for growing up in Japan, being Caucasian made me a glorified visitor. My home was not fully my home because of how I looked. " Now 21-years-old, the photographer recently began a creative project called Tales from Japan to help her deal with her mixed emotions. "The beginning of this project was like a breath of fresh air," she says, "and it began to open doors in my mind and heart that I never knew were locked. Mysterious Poodle Moth Looks Like a Real-Life Fairy. This fuzzy creature is equal parts adorable and puzzling, making you question the line between reality and science fiction. 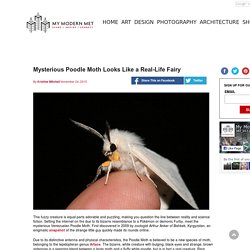 Setting the internet on fire due to its bizarre resemblance to a Pokémon or demonic Furby, meet the mysterious Venezuelan Poodle Moth. First discovered in 2009 by zoologist Arthur Anker of Bishkek, Kyrgyzstan, an enigmatic snapshot of the strange little guy quickly made its rounds online. Due to its distinctive antenna and physical characteristics, the Poodle Moth is believed to be a new species of moth, belonging to the lepidopteran genus Artace. Young Woman Twirls and Dances While Riding a Longboard in Mesmerizing Video. Ko Hyojoo combined the graceful finesse of dancing and the balanced skill of longboarding to produce an impressive video sequence. 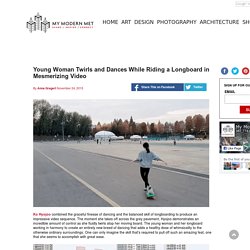 The moment she takes off across the grey pavement, Hyojoo demonstrates an incredible amount of control as she fluidly twirls atop her moving board. The young woman and her longboard working in harmony to create an entirely new breed of dancing that adds a healthy dose of whimsicality to the otherwise ordinary surroundings. One can only imagine the skill that's required to pull off such an amazing feat, one that she seems to accomplish with great ease. Ko Hyojoo: Instagram | Vimeo via [Incredible Things] Woman Knits Tiny Wool Sweaters to Keep Chickens Warm. 25-year-old Nicola Congdon has been working on an unusual winter project for a great reason. 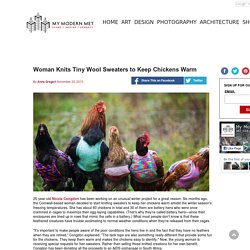 Six months ago, the Cornwall-based woman decided to start knitting sweaters to keep her chickens warm amidst the winter season's freezing temperatures. She has about 60 chickens in total and 30 of them are battery hens who were once crammed in cages to maximize their egg-laying capabilities. (That's why they're called battery hens—since their enclosures are lined up in rows that mimic the cells in a battery.) What most people don't know is that these feathered creatures have trouble acclimating to normal weather conditions when they're released from their cages. Expressive Photos Reveal a Rare, Alternative View of Iran. An image of Iran that many people around the world are familiar with is the view of Iran as a troubled nation plagued by an oppressive government, ultra-conservative ideologies, brutal executions, public demonstrations, rumors of nuclear weaponry, and women who are forced to wear head coverings such as chador. 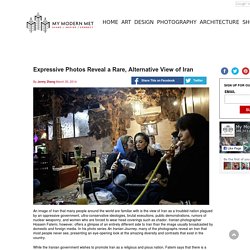 Iranian photographer Hossein Fatemi, however, offers a glimpse of an entirely different side to Iran than the image usually broadcasted by domestic and foreign media. In his photo series An Iranian Journey, many of the photographs reveal an Iran that most people never see, presenting an eye-opening look at the amazing diversity and contrasts that exist in the country.

While the Iranian government wishes to promote Iran as a religious and pious nation, Fatemi says that there is a "semi-hidden part of the country” behind closed doors. Although the photos depict people who appear totally at ease, it was extremely challenging for Fatemi to capture some of these images. Tattooing Machine Allows Individuals to Draw Simple-Yet-Meaningful Tattoos on Themselves. Do you want a tattoo but don’t trust someone to ink it on your skin? 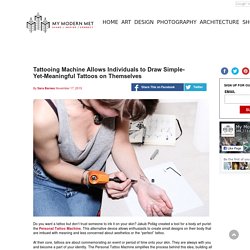 Jakub Pollág created a tool for a body art purist: the Personal Tattoo Machine. This alternative device allows enthusiasts to create small designs on their body that are imbued with meaning and less concerned about aesthetics or the “perfect” tattoo. At their core, tattoos are about commemorating an event or period of time onto your skin. They are always with you and become a part of your identity. Jeff Kutter's 'Boys of Summer' Skate Flick. 'Born In The Wrong Body' Creator Nick Sweeney On Trans Visibility In 2015. Born In The Wrong Body is a three-part series that tracks the lives of young transgender people in the US and UK, some as young as five. 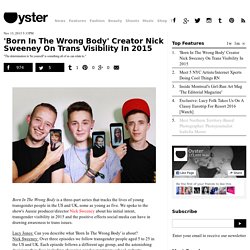 We spoke to the show's Aussie producer/director Nick Sweeney about his initial intent, transgender visibility in 2015 and the positive effects social media can have in drawing awareness to trans issues. Lucy Jones: Can you describe what 'Born In The Wrong Body' is about? Nick Sweeney: Over three episodes we follow transgender people aged 5 to 25 in the US and UK. Each episode follows a different age group, and the astonishing decisions they face including changing gender at primary school, puberty blockers, hormones and for some, surgery. How did the initial concept come about? WMF Endangered World Monuments List. If nothing is done, the world could lose some of its most treasured landmarks and monuments. 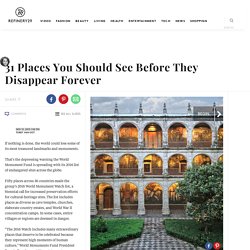 That's the depressing warning the World Monument Fund is spreading with its 2016 list of endangered sites across the globe. Fifty places across 36 countries made the group's 2016 World Monument Watch list, a biennial call for increased preservation efforts for cultural-heritage sites. The list includes places as diverse as cave temples, churches, elaborate country estates, and World War II concentration camps. In some cases, entire villages or regions are deemed in danger. Nature-Inspired Tattoos Made of Thousands of Tiny Dots Mimic Scientific Drawings. Argentina-based tattoo artist Luciano Del Fabro uses a minimalist aesthetic to depict the beauty of the natural world.

Carefully etched animals, trees, and skulls are completed in black ink with countless minuscule dots stippled to add three-dimensional form. Del Fabro's hand is so light, that at times, these dots mimic thin, elegant lines. It's only upon close inspection that we see he's individually poked every tiny circle. Colour optical illusion: can you see black and white video in colour? Have you ever wondered whether what you see as red is the same as what everyone else sees? Or why some people experience colours differently to others? Our world is full of colour, yet we rarely realise just how much work our brains have to do to process the light coming streaming into our eyes, in order to turn it into colour vision.

Just occasionally, we realise we get a clue to what's going on – but only when our vision goes wrong... Extraordinary "Cloud Tsunami" Surges in Over Sydney. A bizarre meteorological event hit the coast of New South Wales, Australia over the weekend. Dubbed a "cloud tsunami" on Twitter, this massive wave in the sky measured several kilometers long and swept over the city of Sydney, bringing with it powerful thunderstorms, heavy rains, and forceful winds that required the Australian Bureau of Meteorology to issue a warning for the surrounding area. The massive formation is actually called a shelf cloud, composed of arcus clouds. The shelf cloud is typically the leading edge of a thunderstorm, attached to the base of the parent cloud that contains the storm. The strange wave-like appearance is caused by the cool sinking air from the storm’s downdraft spreading out over the land, meeting the warm air being drawn into the storm’s updraft.

New Social Media Ads Celebrate the Beautifully Diverse Faces of Love. Inclusivity is a meaningful concept that acts as a catalyst for growth and education. Specifically, learning about those who are different from ourselves gives us the opportunity to open our eyes and our minds. As we discover the obstacles marginalized people face, we can gain and spread awareness to make our world a better place for future generations. This inclusivity-based idea motivated the Ad Council to create the Love Has No Labels campaign, which aims to start conversations about disability, race, sexuality, and religion. In an effort to reach a broader audience and create a dialogue, Ad Council teamed up with Facebook and Instagram to design sponsored ads featuring photographs of those who've faced discrimination.

Ad Council's overall goal is to show viewers just how harmful bias can be. 20 Creative Things For Fox Lovers. Foxes have always fascinated people. They’re fast, nimble, have a luxurious coat ,and nobody can really agree on what their call sounds like. Really, what does the fox say? Traditionally associated with guile and trickery, they’re one of the more popular forest animal. So why not celebrate them with these vixen themed gifts? A Little Owl’s Tiny Adventures In The Woods By Tanja Brandt. Artist Takes Line Art To Next Level By Making Single Continuous Line Tattoos.