Gordon Freeman. Gordon then joins the underground Lambda Resistance, aiding them in their struggle against their oppressors.[3][4] Character design[edit] An early concept art of Gordon Freeman, wearing a bulkier HEV suit, helmet, and goggles Half-Life director Gabe Newell coined the name "Gordon Freeman" during a conversation with the game's writer Marc Laidlaw in his car. 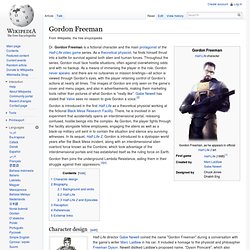 It included a homage to the physicist and philosopher Freeman Dyson. Newell disliked Laidlaw's proposed name, "Dyson Poincaré", which also included the surname of Henri Poincaré. The Mark V initially used a single power source for the flashlight, sprinting, and oxygen supply; in Half-Life 2: Episode Two the flashlight was given a separate power source to improve gameplay. HALF LIFE IN 60 SECONDS. Half-Life Intro. Half-Life in Half an Hour. Half-Life: Source - Full Game Walkthrough 【60 FPS】【NO Commentary】 Simulation. Wooden, mechanical, horse simulator during World War I.

Simulation is used in many contexts, such as simulation of technology for performance optimization, safety engineering, testing, training, education, and video games. Often, computer experiments are used to study simulation models. Simulation is also used with scientific modelling of natural systems or human systems to gain insight into their functioning.[2] Simulation can be used to show the eventual real effects of alternative conditions and courses of action. Simulation is also used when the real system cannot be engaged, because it may not be accessible, or it may be dangerous or unacceptable to engage, or it is being designed but not yet built, or it may simply not exist.[3] Classification and terminology[edit] Physical simulation refers to simulation in which physical objects are substituted for the real thing (some circles[4] use the term for computer simulations modelling selected laws of physics, but this article doesn't).

Half-Life 'Hard' SPEED RUN (0:39:25) [PC] Live by Coolkid #AGDQ 2014. Simulation game. A simulation game attempts to copy various activities from "real life" in the form of a game for various purposes such as training, analysis, or prediction. 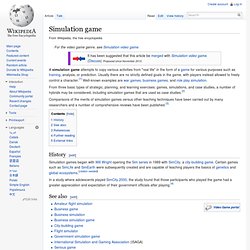 Usually there are no strictly defined goals in the game, with players instead allowed to freely control a character.[1] Well-known examples are war games, business games, and role play simulation. From three basic types of strategic, planning, and learning exercises: games, simulations, and case studies, a number of hybrids may be considered, including simulation games that are used as case studies.[2] Comparisons of the merits of simulation games versus other teaching techniques have been carried out by many researchers and a number of comprehensive reviews have been published.[3] History[edit] In a study where adolescents played SimCity 2000, the study found that those participants who played the game had a greater appreciation and expectation of their government officials after playing.[4] See also[edit]

Video game. A video game is an electronic game that involves human interaction with a user interface to generate visual feedback on a video device. 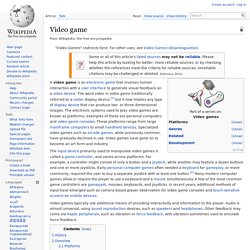 The word video in video game traditionally referred to a raster display device,[1] but it now implies any type of display device that can produce two- or three-dimensional images. The electronic systems used to play video games are known as platforms; examples of these are personal computers and video game consoles. These platforms range from large mainframe computers to small handheld devices. Specialized video games such as arcade games, while previously common, have gradually declined in use. Video games have gone on to become an art form and industry. Video games typically use additional means of providing interactivity and information to the player.

History Early games used interactive electronic devices with various display formats. Other early examples include: Overview Platforms Genres. Half-Life (series) Half-Life video game. Valve, set up by former Microsoft employees, had difficulty finding a publisher for the game, with many believing that it was too ambitious a project. 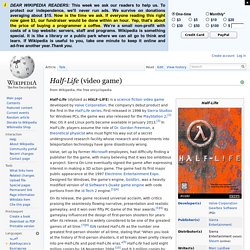 Sierra On-Line eventually signed the game after expressing interest in making a 3D action game. The game had its first major public appearance at the 1997 Electronic Entertainment Expo. Combine (Half-Life) The Combine are frequently shown as harsh rulers over the citizens of Earth, suppressing dissent with brutality, policing using violence and using invasive surgery to transform humans into either soldiers or slaves. 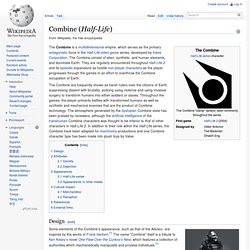 G-Man (Half-Life) Throughout the story of the Half-Life series, the G-Man plays the role of an overseer and employer - he controls player-character Gordon Freeman's insertion to or extraction from the game world on several occasions, and his monologues with Freeman reveal his importance in the series' overall narrative. 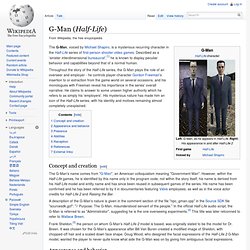 He claims to answer to some unseen higher authority which he refers to as simply his 'employers'. His mysterious nature has made him an icon of the Half-Life series, with his identity and motives remaining almost completely unexplained. A description of the G-Man's nature is given in the comment section of the file "npc_gman.cpp" in the Source SDK file "sourcesdk.gcf": "// Purpose: The G-Man, misunderstood servant of the people. " In the official Half-Life audio script, the G-Man is referred to as "Administrator", suggesting he is the one overseeing experiments.[2] This title was later retconned to refer to Wallace Breen. Vortigaunt. Vortigaunts are shown as a very communal and cultural race, believing in a force that binds the fabric of the universe and each Vortigaunt together, as well as producing a tradition of poetry and music. 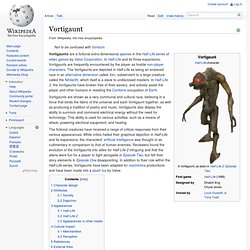 Vortigaunts also display the ability to summon and command electrical energy without the need for technology. This ability is used for various activities, such as a means of attack, powering electrical equipment, and healing. The fictional creatures have received a range of critical responses from their various appearances. Half-Life: Opposing Force. Opposing Force returns to the same setting as Half-Life, but instead portrays the events from the perspective of a U.S. 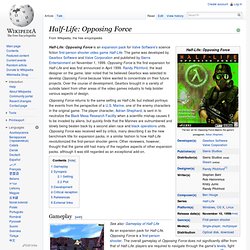 Marine, one of the enemy characters in the original game. The player character, Adrian Shephard, is sent in to neutralize the Black Mesa Research Facility when a scientific mishap causes it to be invaded by aliens, but quickly finds that the Marines are outnumbered and slowly being beaten back by a second alien race and black operations units. Half-Life 2. The Orange Box - Half-Life 2. 1998. 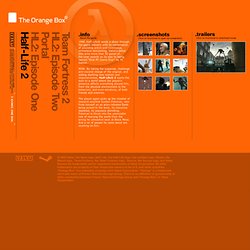 Half-Life® sends a shock through the game industry with its combination of pounding action and continuous, immersive storytelling. Valve's debut title wins more than 50 game-of-the-year awards on its way to being named “Best PC Game Ever” by PC Gamer. NOW. Trailer-2. Half-Life 2: Episode 2 Trailer. Half-Life: Blue Shift. As with Gearbox's previous expansion pack Opposing Force, Blue Shift returns to the setting and events of the original game, but portrays the story through the eyes of another person. 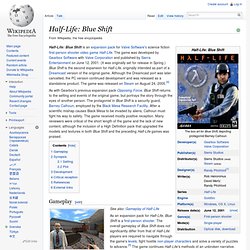 The protagonist in Blue Shift is a security guard, Barney Calhoun, employed by the Black Mesa Research Facility. After a scientific mishap causes Black Mesa to be invaded by aliens, Calhoun must fight his way to safety. The game received mostly positive reception. Half-Life: Decay. Gameplay[edit] In Half-Life, players usually fight alone and only occasionally encounter friendly non-player characters who assist them, such as security guards and scientists.

While Decay still features levels where this is the case, significant sections in Decay are dedicated to working with friendly non-player characters, usually escorting them to various objectives and protecting them in firefights.[3] An array of enemy characters from Half-Life populate the game, including alien lifeforms such as headcrabs and Vortigaunts, as well as human soldiers sent in to contain the alien threat. The players have access to a limited selection of Half-Life's weaponry to assist them in the game.[3] Although developed after Opposing Force, no non-player characters or weapons from the earlier expansion appear in Decay. Locations of Half-Life. Locations[edit] Half-Life and expansions[edit] Black Mesa Research Facility[edit] Lambda. Lambda (uppercase Λ, lowercase λ; Greek: Λάμ(β)δα lam(b)da) is the 11th letter of the Greek alphabet.

In the system of Greek numerals lambda has a value of 30. Lambda is related to the Phoenician letter Lamed. Black Mesa: A Half-Life 2 modification. Black Mesa Official Trailer. Half-Life coverage site. Prospekt Official Trailer. The Writer of 'Half-Life' Parts Ways With Valve. Gordon Freeman might not equip his crowbar again.